Assemblyman Kieran Michael Lalor, a former teacher at Our Lady of Lourdes in Poughkeepsie, is a Marine Corps veteran of Operation Iraqi Freedom and a frequent guest on the Fox News Channel. Lalor is of counsel to the law firm Gaines, Novick, Ponzini, Cossu & Venditti. He is a graduate of John Jay High School, Providence College and Pace Law School and lives in Hopewell Jct. with his wife Mary Jo and their four young children Katie, Riley, Mikey and Kieran Jr..

This year's keynote speak is Katie Horgan. Katie was commissioned as a 2nd Lieutenant in the United States Marine Corps in May of 2006. Assigned as Logistics Officer, Katie was stationed at Camp Pendleton and deployed to Iraq as a Platoon Commander in 2008. She deployed again in 2011 as an Operations Officer for the 11th MEU (Marine Expeditionary Unit).

If you know any World War II veterans who would be interested in attending, please share this invite with them or call our office at (845) 221-2202. This has been a wonderful annual event to honor their service to our country. Each year, their attendance has made the event special and given younger generations a chance to connect with their important legacy. 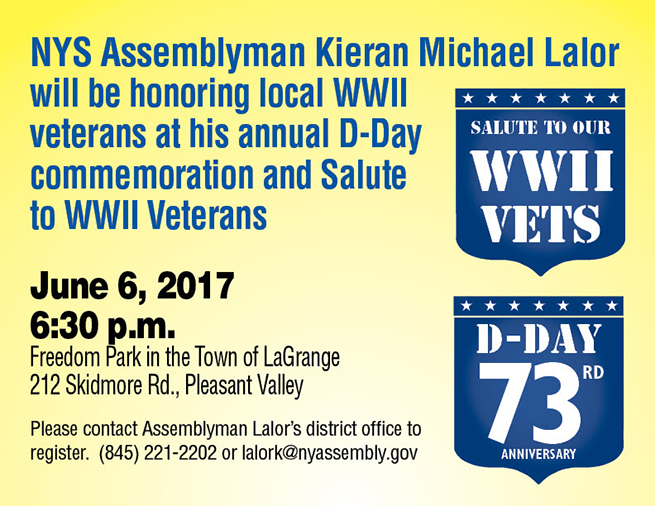