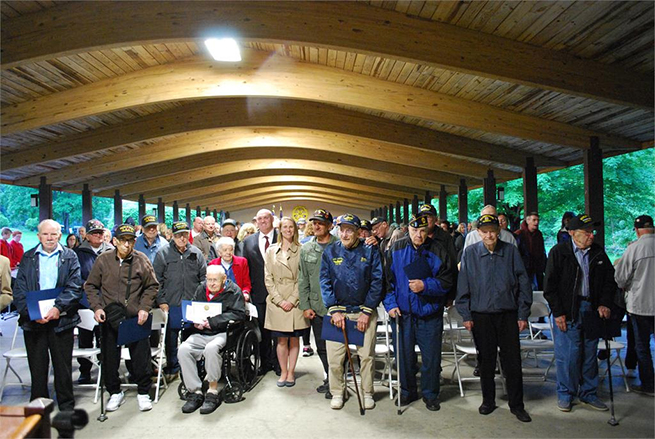 (left to right) Assemblyman Lalor and D-Day veteran Carl Alexanderson of Wingdale
Assemblyman Kieran Michael Lalor held his fourth annual Salute to World War II Veterans and Commemoration of D-Day on Tuesday. Lalor honored 16 World War II veterans in attendance at the event in Freedom Park in the Town of LaGrange. A crowd of about 150 braved the unusually cold weather, similar to weather faced by American troops on D-Day, 1944 in Normandy, France. “These men left their lives to take up arms and defend our freedom against the threat of horrific evil,” said Lalor. “They have our eternal gratitude.” Opening remarks came from Lalor and LaGrange Town Supervisor Alan Bell. Army Air Corps veteran Carl Alexanderson of Wingdale received a standing ovation after his first-hand account of D-Day aboard a B-24 bomber, the bomber sustained heavy damage and crash landed. Ron Ymbras, a veteran of Vietnam, spoke next about his reenactment of the D-Day jump that the 101st Airborne Division experienced over France. The Hudson Valley Council BSA Band played a medley of Armed Forces anthems, honoring all military divisions present. Keynote speaker Katie Horgan, a USMC veteran of Iraq, then addressed the World War II veterans with a theme of thanks and respect for the sacrifices made by the Greatest Generation, which included her grandfathers, both WWII veterans, one of whom survived the attack on Pearl Harbor. Color guard duties were performed by Dutchess County Cadet Squadron of the Civil Air Patrol, NY-159. Boy Scout Troop 182 helped set up the event. Among the World War II veterans in attendance was Harry Jenkins of Amenia. Harry had three brothers who also served during World War II, one of whom was killed in action over Mindoro in the Philippines. The World War II veterans paused for a group photograph and then made sure to shake each other’s hands and were surprised when many of the audience members came over to shake their hands, say thank you, and asked them to pose for pictures. “Thank you for your service,” the younger generations said repeatedly.