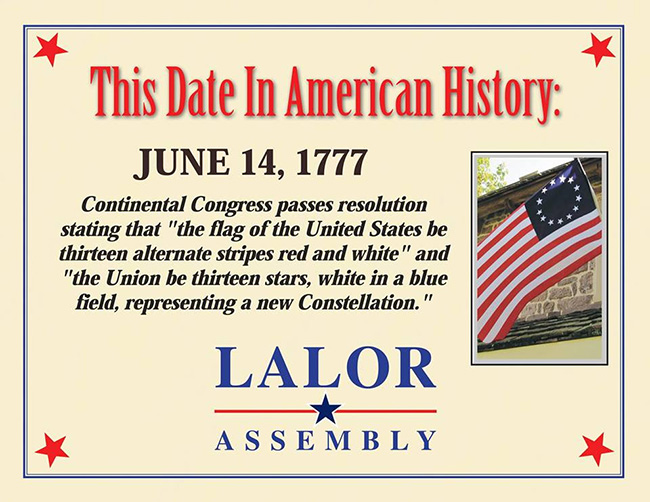 The flag of our country is a symbol of freedom, democracy and hope. But I think the flag also has real tangible power. Let me give you a couple of examples of what I mean.

Look back on the battle for Iwo Jima in the Pacific during WWII, when six Marines raised the flag on Mount Suribachi a few days into the battle for that island. This was the first time in WWII that American troops fought on a sovereign Japanese island. When the flag went up on that volcanic island it broke the morale of the Japanese troops.

The Japanese kept fighting hard but they knew that once that flag was planted on Japanese soil it was the beginning of the end for them. And the reverse happened with our troops. The Americans fighting for Iwo Jima knew that our flag flying up there meant that the fate of the war was sealed. There was still a lot of hard fighting to go, but the flag on Suribachi meant inevitability and the momentum of the war were on our side.

Even more tangibly, the picture that was taken by AP photographer Joe Rosenthal of the flag being raised on Iwo Jima was brought home. At the time the country was running out of money to fight the war and we sold war bonds to fund the beans and the bullets for our troops to win in Europe and the Pacific. The photograph of the flag raising and the surviving flag raisers themselves, became the driving force behind a very successful war bond drive.

If you fast-forward two decades to the 1960s when the country was being torn apart by cultural changes, an unpopular war in Southeast Asia and racial strife, we put men on the moon. One of the things our astronauts did when they landed on the moon was raise our flag. Our flag flying on the moon, of all places, showed what our country can do when we unify and work together.

Also, 16 years ago when our country was suddenly and savagely attacked by Islamic terrorists, one of the first things the firefighters did, with three hundred of their brothers dead and the country under attack, was raise the American flag. The 9/11 flag raising told our enemies and our allies alike that we were a remarkably resilient people.

When I was in Iraq I received an American flag from my father when we had our first mail call. We kept the flag in the squad area of every position that we held for the rest of the deployment. Other squads in the company were inspired by the humble raising of our glorious flag and wrote home asking for Old Glory to be sent to them. Soon each squad in the platoon and most of the squads in the company had an American flag. When we moved to a new location posting the flag became as routine as building sandbag walls.

No doubt the flag is symbolic of many important and noble things, but it has also been a powerful tool of foreign policy and national defense.