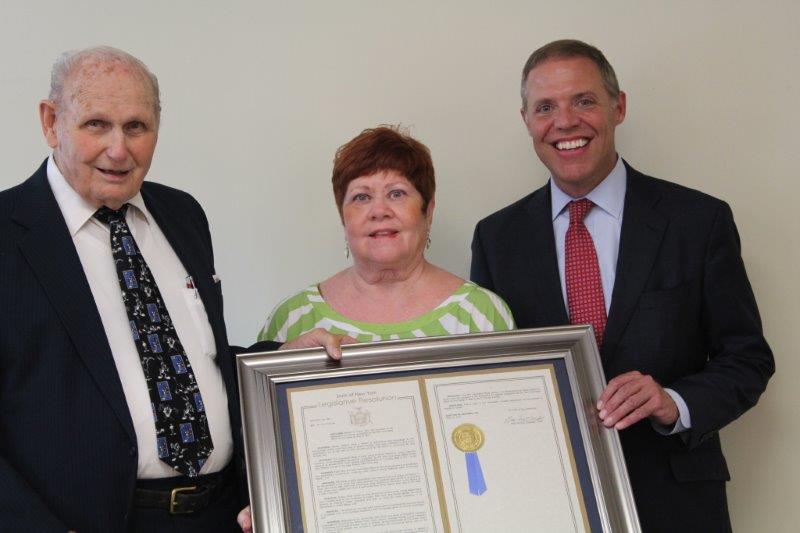 Assemblyman Will Barclay (R,C,I—Pulaski), at right, presents an Assembly Resolution to long-time Fulton volunteer, Mr. Bob Green. Pictured with Barclay are Mr. Green and his wife, Sandy. Mr. Green was honored for his dedicated service to the community.

Assemblyman Will Barclay (R,C,I,Ref-Pulaski) presented longtime volunteer Robert “Bob” Green with an Assembly Resolution. Mr. Green was recently recognized by the New York State Office for the Aging for his outstanding contributions. Mr. Green has been an active resident of Fulton who continuously finds ways to give back to his community after serving in the United States Navy during World War II. Mr. Green has volunteered with the Fulton YMCA, Fulton Public Library, Oswego County Tourism Advisory Committee and Friends of Fulton Parks. Mr. Green is also the founder of The Green Team, a group of local people reintroducing the concept of taking care of our communities in order to address the increasing littering problem. The State Assembly resolution sponsored by Barclay passed the Assembly in May and is part of official state record. “I am pleased to honor Mr. Green who has demonstrated a longtime commitment and dedication to our community in order to improve opportunities for the whole area. Through his good grace, determination, dignity and humor, Mr. Green has inspired and enriched countless lives and helped make Oswego County and Fulton a better place,” said Barclay.