On April 28, Assembly Minority Leader Brian M. Kolb (R-Canandaigua) and I introduced legislation (A. 7060) to direct the New York State Health Department to establish a program immediately to enable critically ill patients obtain emergency access to medical marijuana. The Assembly Health Committee (which I chair) reported the bill out later that day.

In 2014, Governor Cuomo signed into law a watered down version of the medical marijuana bill I sponsored. He said he wanted the State Health Commissioner to do everything he could to get medical marijuana to children suffering from life-threatening forms of epilepsy. To date, however, not one patient has received medical marijuana, and at least three children who might have benefited from this well-known form of medical marijuana have died since the bill was passed. 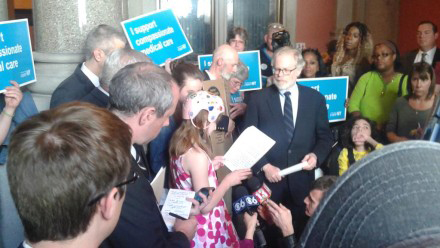 On April 28, I joined colleagues, patients, family members, and activists to announce the introduction of bipartisan legislation to speed emergency access to medical marijuana for patients who desperately need it, like 12-year-old Mackenzie Kulawy, who suffers from a rare form of epilepsy that causes multiple seizures.

On April 28, activists for LGBT rights from all across New York State converged on Albany for "Equality and Justice Day." Hundreds of New Yorkers lobbied their legislators on two important bills: the Gender Expression Non-Discrimination Act (GENDA, A. 4558A), legislation I've introduced along with Senator Dan Squadron (D-Brooklyn & Manhattan) to protect transgender New Yorkers by banning discrimination on the basis of gender expression or identity; and A. 4958, a bill introduced by Assembly Member Deborah Glick (D-Manhattan) and Senator Brad Hoylman (D-Manhattan) that would prohibit mental health professionals from engaging in so-called "conversion therapy" to change the sexual orientation of minors.

The Assembly has passed GENDA seven years in a row, but it has not been acted on in the State Senate. With 19 states already having enacted some legal protections for transgender persons, GENDA is civil rights legislation that is long overdue.

Time for a Rent Freeze - Even a Roll-Back!

Last month the New York City Rent Guidelines Board (RGB), the nine-member panel that establishes rent adjustments every year for apartments in New York City subject to the Rent Stabilization Law, issued a report showing that landlord operating costs in rent-stabilized apartments increased by just 0.5% in the past year - the lowest such increase since 2002. Following the study's release, I and many others called on the RGB to freeze or lower rents for rent-stabilized tenants renewing leases between October 1, 2015 and September 30, 2016. Last year the RGB gave landlords a 1% increase for one-year leases and a 2.75% hike for two-year leases. And for years, rent stabilization increases have often well exceeded actual increases in costs. Yet, at its meeting in April, the RGB proposed this range of increases for rent stabilized apartments and lofts:

Too many New Yorkers find it harder and harder to make ends meet. With landlords realizing huge cost savings in the past year, it's time for the Board to pass those savings on to tenants. The Rent Guidelines Board must end the business-as-usual practice of granting automatic rent hikes to real estate interests every year. The RGB's own study shows that freezing or lowering rents for a million rent-stabilized households is an appropriate and responsible step that will help keep city living affordable for millions of New Yorkers without subjecting property owners to any financial burden.

Last year, the RGB ignored calls for a rent freeze, and it turns out the increases they allowed gave landlords a windfall higher than their costs, which the RGB now shows have stayed virtually flat. It's overdue to give families some relief.

Hearing on Bill to Require Health Warnings on Sugary Drinks

On April 13, the Assembly Committee on Consumer Affairs & Protection, chaired by Jeffrey Dinowitz (D-Bronx) and the Assembly Committee on Health, chaired by me, held a hearing on a bill to require health warning labels on sugary beverages. The legislation would increase consumer awareness of the health risks of sugar-sweetened beverages, including many soft drinks, energy drinks, sweet teas, and sports drinks.

At the hearing in Manhattan, we heard testimony from the New York City Department of Consumer Affairs and the New York City Department of Health & Mental Hygiene; experts on public health from institutions like the Columbia University Institute of Human Nutrition, the New York University School of Medicine, the American Diabetes Association, and the American Heart Association, among others, supporting the bill; and from the Food Industry Alliance of New York State and the Business Council of New York State, opposing it.

Health care providers and researchers testified that sugar-sweetened beverages are a unique contributor to excessive calorie consumption, and studies suggest that warning labels can increase consumer awareness of the health risks of harmful products such as sugar-sweetened beverages. With the obesity rate increasing dramatically over the past 30 years - adding an estimated $147 billion to our country's annual health care costs - putting health warnings on sugary beverages is an idea whose time has come. Health warnings on drinks that help fuel the epidemic of obesity, diabetes, and heart disease make sense, just as they do for tobacco products. 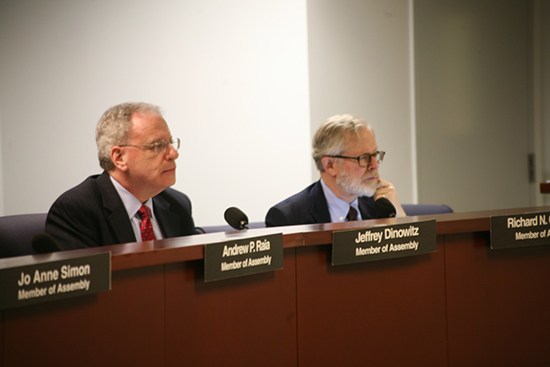 In April, Assembly Member Jeffrey Dinowitz and I co-chaired an Assembly hearing on a bill to require health warnings on sugary beverages that contribute to the rise in obesity, heart disease, and diabetes.

In April, I joined supporters of the Callen-Lorde Community Health Center's Women's Health Program to honor Lea DeLaria, the comedian, musician, and actor currently starring in the Netflix series "Orange is the New Black." She's been a strong supporter of Callen-Lorde since 2001, and it was an honor to join a spirited crowd that included pioneering marriage equality activist Edie Windsor and actor Stephen Wallem in recognizing her well-deserved dedication and activism. 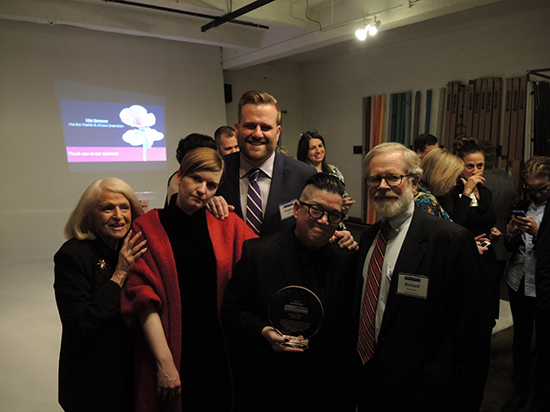 Love Our Parks and Our Environment

On May 2, I joined local residents to celebrate "I Love My Park" Day at Chelsea Waterside Park. I've long supported the Chelsea Waterside Park Association's efforts to improve and preserve this urban oasis, and was gratified to community volunteers helping make the Park look more beautiful than ever.

The previous week, I celebrated Arbor Day with some of my youngest constituents at the Ryan Chelsea-Clinton Community Health Center. The Center invited second graders from P.S. 111 to celebrate by potting flowers to take home while learning about the importance of protecting our environment and developing healthy eating habits. I had a wonderful time reading one of my favorite children's books, Shel Silverstein's classic "The Giving Tree." 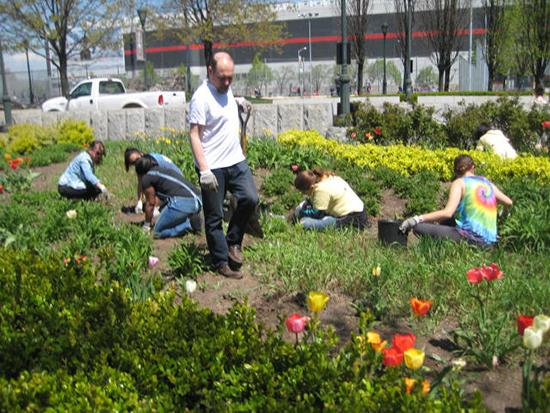 Volunteers at Chelsea Waterside Park on "I Love My Park Day." 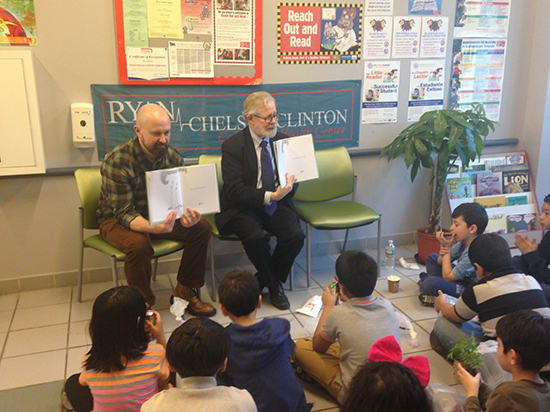 On Arbor Day, I read "The Giving Tree" to local schoolchildren at the Ryan Chelsea-Clinton Community Health Center.

On May 2, I joined members of the New York City Fire Department (FDNY) in celebrating its 150th Anniversary at "open house" events in firehouses and emergency medical service stations in the 75th Assembly District, including the firehouses of Engine Company 3/Ladder Company 12 on West 19th Street in Chelsea and at Engine Company 54/Ladder Company 4 at Eighth Avenue and 47th Street in Hell's Kitchen, and the EMS station on West 23rd Street, and got to thank them for their extraordinary service. For a century and a half, the men and women of the FDNY have selflessly and bravely protected life and property. 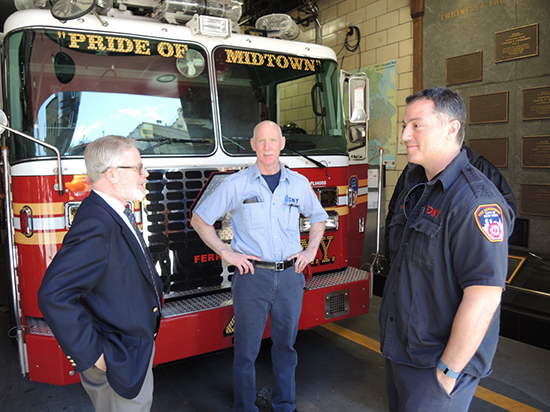 Celebrating the 150th Anniversary of the FDNY with some of New York's Bravest in Hell's Kitchen.

I recently joined an amicus brief initiated by Public Advocate Letitia James that will be submitted to New York State's Appellate Division supporting an appeal to unseal the grand jury proceedings in the investigation into the death of Eric Garner while in NYPD custody on Staten Island. The purpose of the case, which is being brought by Public Advocate James, along with the New York Civil Liberties Union, the Legal Aid Society, and the Staten Island branch of the NAACP, is to inform the consideration of legislative reforms.

Public outrage over the deaths of unarmed civilians at the hands of law enforcement authorities is mounting ever higher as we hear of more tragic cases like those on Staten Island, Baltimore, Ferguson, and Charleston. With many questioning the impartiality and transparency of the judicial system in ruling on these and similar cases, there is a compelling argument for more and better disclosure of how our prosecutors, courts, and grand juries operate in meting out justice to those who are charged with enforcing our laws.