In response to concern over aggressive panhandling and harassment in Times Square by costumed characters and "topless" individuals, Mayor de Blasio has convened a task force charged with improving safety and pedestrian traffic flow, reducing the aggressive solicitations, and reviewing legal issues.

The task force will be co-chaired by Police Commissioner William Bratton and City Planning Commissioner Carl Weisbrod, and will include representatives from City agencies, local elected officials (including me), and stakeholders from the Times Square Alliance and other organizations. The panel is supposed to report back by October 1.

Police Commissioner Bratton has suggested re-opening the pedestrian plazas in Times Square to vehicular traffic to minimize the amount of public open space where harassing and disruptive behavior can occur. While I share concerns over aggressive solicitations, I oppose this idea. We need more open space, not less. The plazas have been a great attraction and improved public safety.

In July, I joined a huge rally to celebrate the vote by a New York State Wage Board convened by Governor Cuomo to establish higher minimum wages for fast food industry workers in New York. A series of increases will ultimately raise the pay for fast food workers to $15 an hour. Fast food chains have been reaping huge profits while many of their full-time workers are forced to apply for food stamps and other government benefits just to make ends meet.

There's still a long way to go for workers in other industries. I strongly support raising New York State's minimum wage for all workers to $15 an hour. It is now $8.75 and will go to $9.00 next year â€“ but that's far too low for a family in New York. I'll keep fighting to raise the minimum wage, and to enact Mayor de Blasio's proposal to allow New York City to establish its own higher minimum wage, as other cities around the country have done. These steps are critical to reducing the widening income inequality in New York. 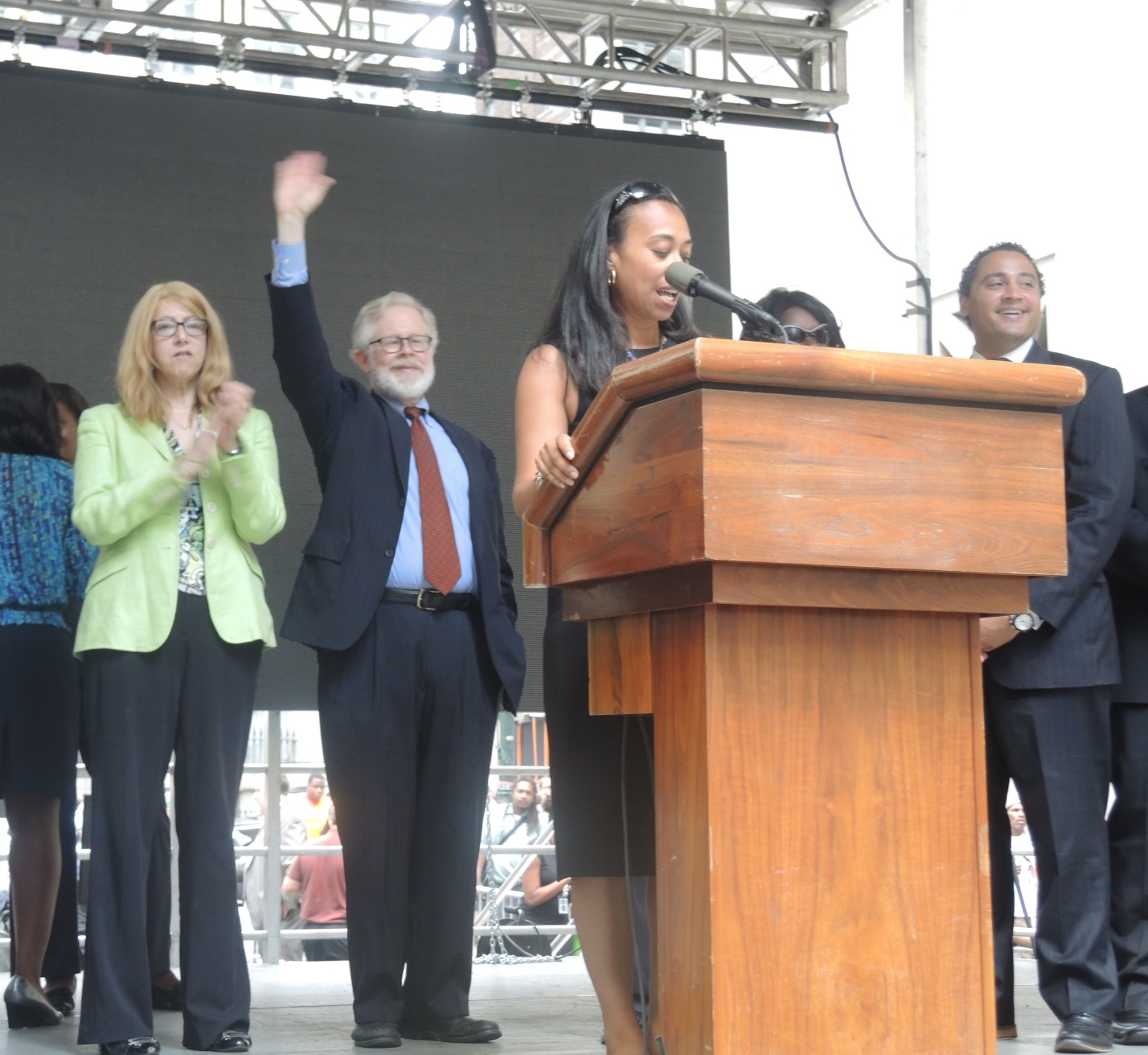 The Obama Administration took a big step to protect working people in August. The National Labor Relations Board ruled that businesses using "contractors" and franchise arrangements to hire workers can be held accountable as those workers' "employer." This is an extraordinarily important action to protect working people from corporate efforts to avoid responsibility and to make it easier for workers to organize.

On Monday, August 31, the New York City Economic Development Corporation released a Request for Proposals (RFP) to build a mixed-use development at 495 Eleventh Avenue at W. 39th Street. The City has set a goal of 100% affordable housing at the nearly 25,000 square foot lot, which was once the site of the New York Butchers' Dressed Meat Company, and is currently a parking lot for NYPD vehicles. In a twist on the lyrics of the old Joni Mitchell song, the City is razing a parking lot and putting up - if not quite paradise - sensible development prioritizing affordable housing.

Building affordable housing on this site has long been a goal of Community Board 4 and its local elected officials representing the site: Manhattan Borough President Gale Brewer, Council Member Corey Johnson, State Senator Adriano Espaillat, and me. In keeping with Mayor de Blasio's commitment to creating 200,000 new units of affordable housing, the City is moving ahead with this very promising initiative. It's great news!

Night Out Against Crime in Chelsea & Hell's Kitchen

Every summer, communities across the country participate in the "National Night Out Against Crime." Local residents, businesses, neighborhood groups, and law enforcement officers join to support crime prevention efforts and celebrate the strength and diversity of our communities.

In August, I participated in Night Out Against Crime events at Fulton Houses in Chelsea and at the P.S. 111 playground in Hell's Kitchen. In Chelsea, I talked with volunteers with the Fulton Houses Tenants Association, the Hudson Guild, NYPD officers from the 10th Precinct, including its Commanding Officer, Deputy Inspector Michele Irizzarry, and other community organizations and Chelsea residents.

In Hell's Kitchen, I caught up with volunteers for community-based organizations like the Midtown North Precinct Community Council and local residents, and thanked NYPD officers and Manhattan District Attorney Cy Vance for working to keep our neighborhoods safe. 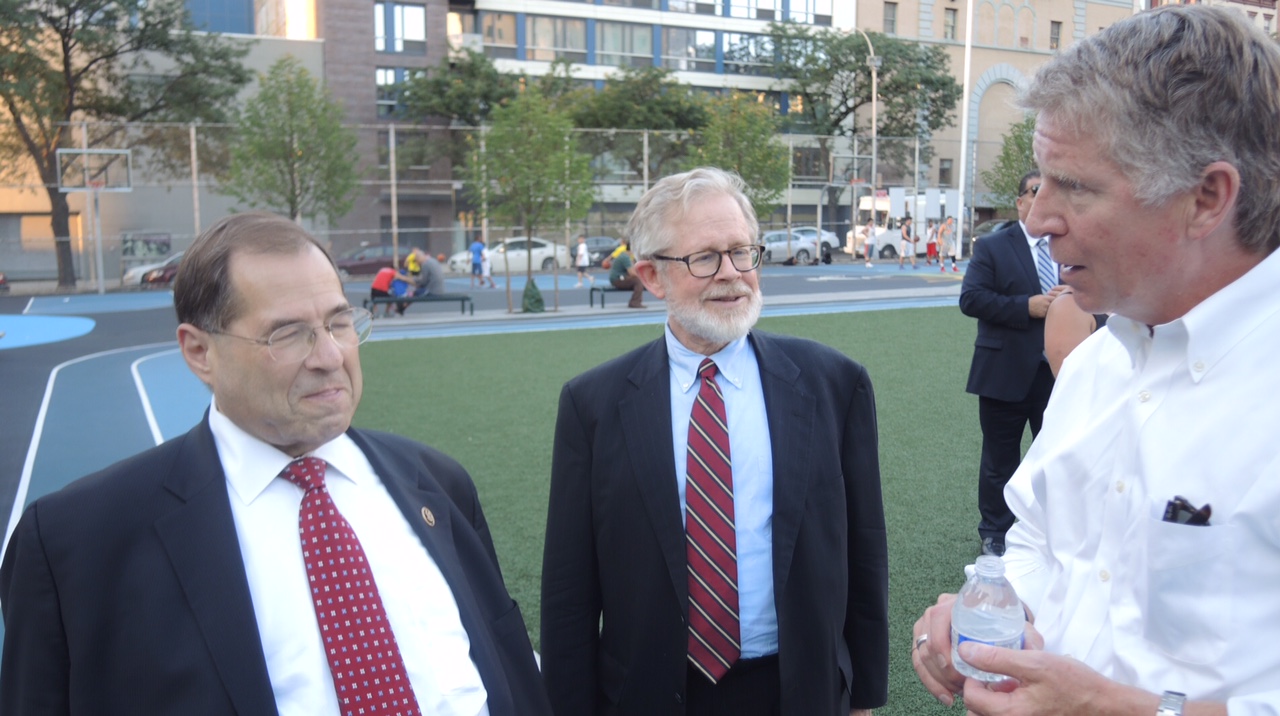 With Congressman Jerry Nadler and Manhattan D.A. Cyrus Vance, Jr., at the Night Out Against Crime event in Hell's Kitchen at P.S. 111.

In July, I spent an evening sailing on the Hudson River and New York harbor aboard the sloop "Clearwater" at the annual benefit for the Chelsea Waterside Park Association. Members and friends of the Association joined environmentalists and park advocates to enjoy a beautiful evening in support of an important community organization.

Founded more than three decades ago, the Chelsea Waterside Park Association has spearheaded the creation and revitalization of Chelsea Waterside Park, connecting the neighborhood with its then-underutilized waterfront and providing precious parkland to a community starved for public open space.

The folksinger and progressive activist Pete Seeger was a founder of the "Clearwater" project to clean up the Hudson River and was actively involved with it as long as he lived. It is an "environmental flagship" that was one of the first sailboats in the U.S. to host science-based environmental education excursions. Since its first voyage in 1969, more than half a million people â€“ including many schoolchildren â€“ have experienced their first real look at the Hudson River estuary's eco-system aboard the "Clearwater," which was named to the National Register of Historic Places in 2004.

The New York City Landmarks Preservation Commission (LPC) has rejected the application to expand the Madison Square North Historic District, as proposed by the 29th Street Neighborhood Association and CB 5. I have joined with State Senators Liz Krueger and Brad Hoylman and Council Member Dan Garodnick to ask the LPC to reconsider this decision.

The expanded district would add approximately 150 buildings, including pre-Civil War row houses; early 20th Century hotels; apartment, commercial, and loft buildings; and the original home of Tin Pan Alley, the birthplace of popular American music in the years before World War II. With unique architecture and a rich history, many of these buildings are historically significant and would complement the buildings in the existing historic district.

In our letter, we requested that the LPC schedule a public hearing to permit the elected officials, advocates, and the public to comment on this important designation. 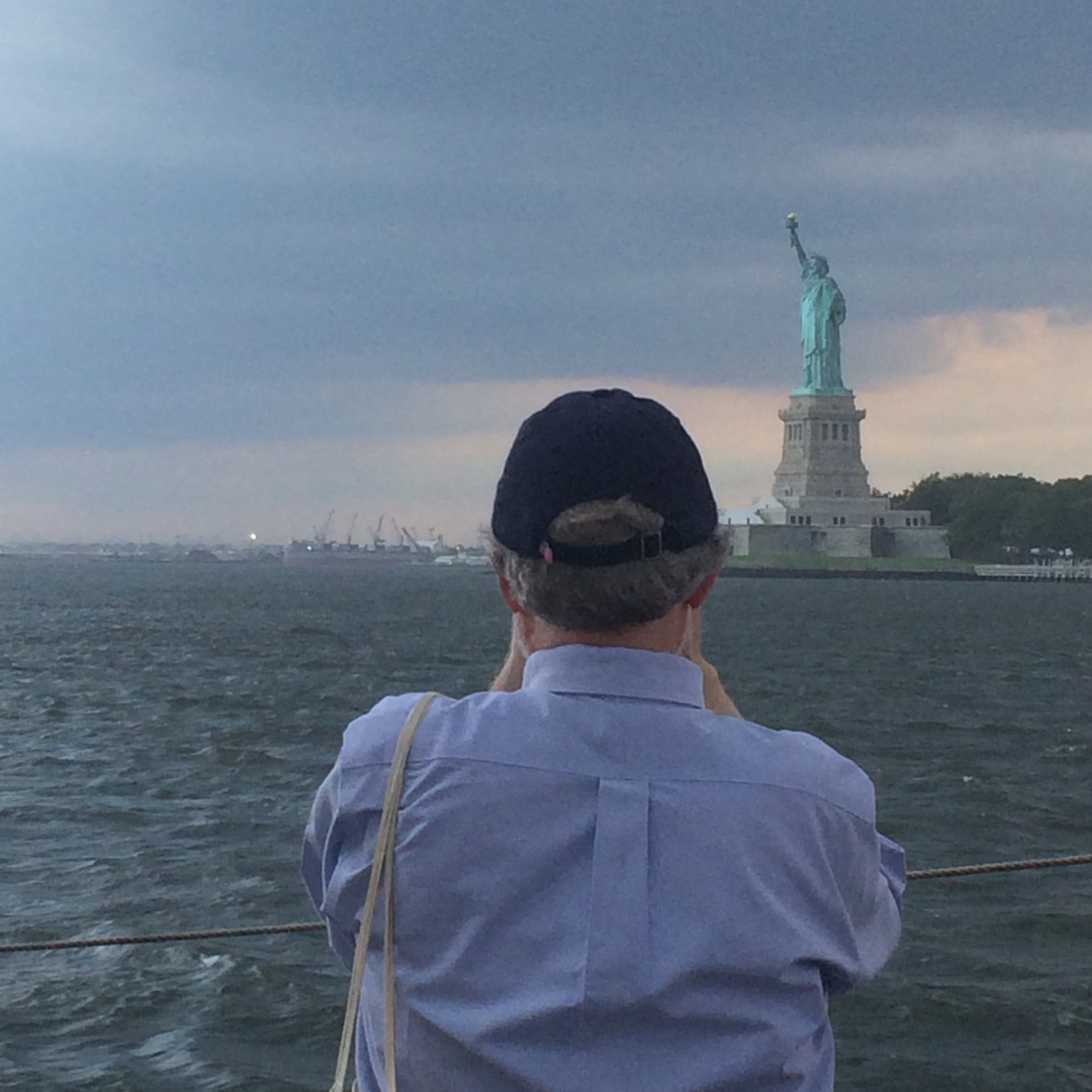 Sightseeing aboard the Clearwater at the Chelsea Waterside Park Association's annual benefit.

Last summer marked the 80th anniversary of Social Security and the 50th anniversary of Medicare and Medicaid. All three programs have played a critical role in the economic and social safety net of our country, and are well worth celebrating. Social insurance works! Let's protect and expand it!

These programs reflect the moral principle that we are here not only for ourselves. We are here to support one another, and government is an essential tool for doing that. Unfortunately, there are powerful forces in America working against that principle.

Medicare and Medicaid â€“ which were passed by Congress in 1965 over the opposition of Ronald Reagan, the American Medical Association, and most of the Republican Party â€“ have improved the lives of hundreds of millions of Americans and offer a great example of the effectiveness of single-payer health care coverage! At the end of July, I joined NYC Public Advocate Tish James, Congresswoman Nydia Velazquez, and members of the CUNY Professional Staff Congress, Metro NY Health Care for All, the NYS Nurses Association, Physicians for a National Health Program, officials from the US Dept. of Health & Human Services, New Yorkers benefiting from Medicare & Medicaid, and other supporters to celebrate this milestone for these two critical government programs.

Despite the obvious success of these life-saving government programs, Social Security, Medicare, and Medicaid are threatened by reactionary political forces seeking to slice benefits, shrink coverage, and leave more Americans to fend for themselves at the mercy of the "free market" system. We must protect and expand programs that benefit all of us, not just the privileged. 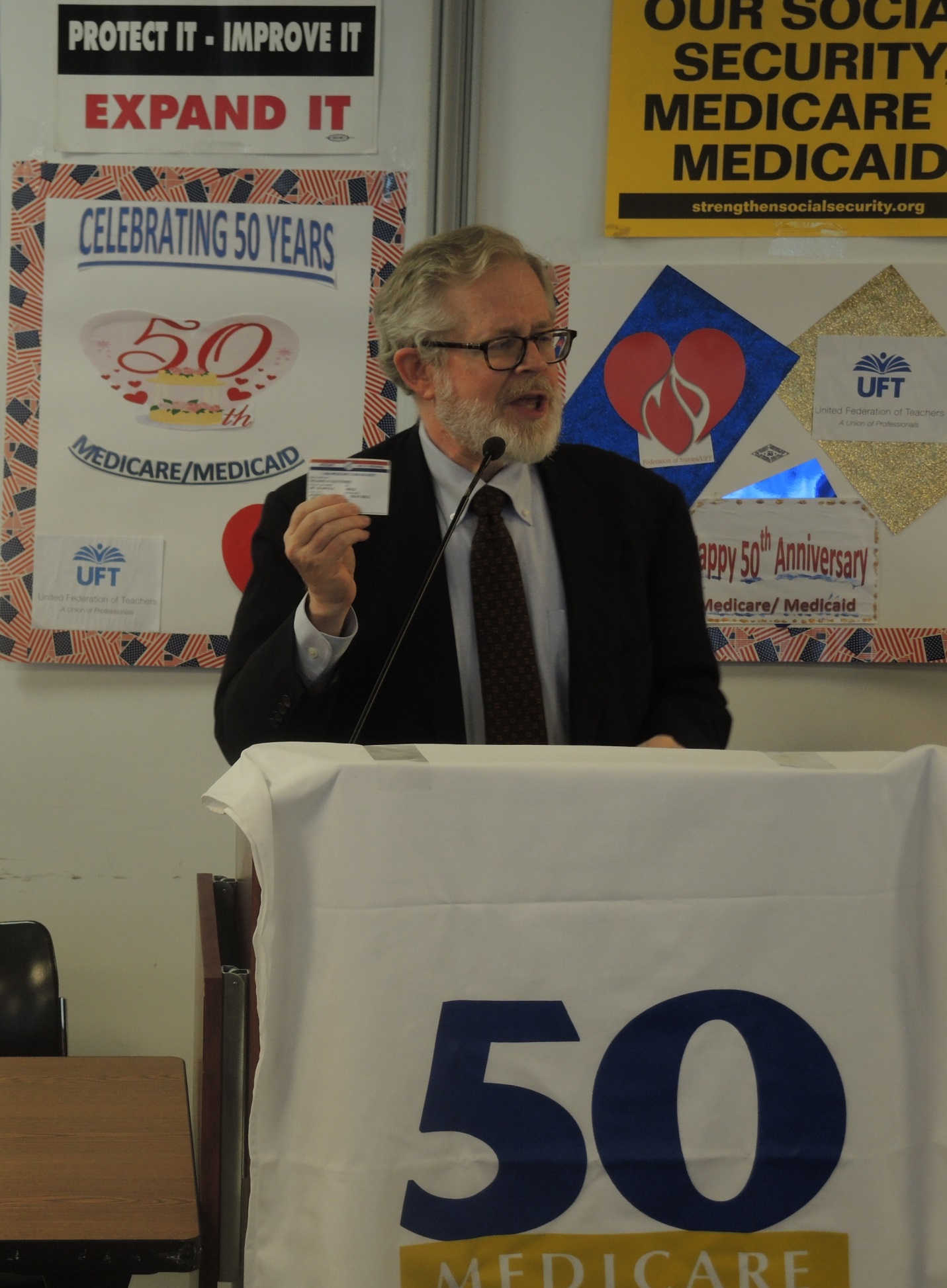 Showing my Medicare card at a 50th anniversary celebration of Medicare and Medicaid.

Earlier this year, New York City began offering municipal photo identification cards ("IDNYC cards") to City residents 14 years and older, regardless of immigration status. An IDNYC card can be used to enroll in City services and programs, to gain entrance to City buildings that are open to the public, and to obtain a free one-year membership in many of the City's leading museums, zoos, concert halls, and botanical gardens, such as Carnegie Hall, Lincoln Center, City Center, and the Metropolitan Museum.

To learn how to enroll, visit the City's website at www.nyc.gov/idnyc or call 311.