Last month an agreement was finally reached to finance the $29 billion capital plan of the Metropolitan Transportation Authority (MTA), which will allow it to repair and expand the subway and bus networks of New York City's mass transit sys-tem, the largest in the nation.

Mayor de Blasio fought for and won commitments by the State not to divert MTA capital funds to non-transit uses and a greater degree of City influence over MTA projects in the five boroughs. Mayor de Blasio made a historic commitment to increase City funding for the MTA's capital budget to $2.5 billion. This represents a massive increase over the City's past annual contribution of $125 million, while at the same time securing important guarantees for city residents. The State has pledged $8.3 billion toward the capital plan.

We usually think of the subway and bus system as being the City's responsibility - why wouldn't it be? But the reality is that the MTA is a regional agency controlled by the Governor. Mayor de Blasio was right to fight for protections for City transit riders.

The MTA and the NYC Dept. of Transportation (DOT) are soliciting public opinion as the MTA considers implementing Select Bus Service (SBS) on the M23 route that runs crosstown on 23rd Street. With 15,000 daily passengers and a route of about three miles, the M23 is an important crosstown route - and one that stand in definite need of improvement.

As we have seen on other bus routes in the city, SBS can speed service considerably.

For more than a decade, I have been helping to lead efforts to address the exponential growth of residential apartments being illegally used as hotel rooms or transient housing. The illegal renting out of residential apartments for short-term stays diminishes the housing stock, can be a nightmare for other residents of the building, and creates security and fire safety problems. The problem is fueled by online "sharing" sites like Airbnb. (This is not what my parents taught me is "sharing.") Last year, New York Attorney General Eric Schneiderman found that a majority of Airbnb rentals in New York City are illegal under the Illegal Hotel Law enacted in 2010, sponsored by me and Sen. Liz Krueger.

The problem continues to spread. In response, NYC Councilmembers have introduced several bills to crack down on illegal hotels. On October 30, State Senator Liz Krueger and I submitted joint testimony to the City Council's Committee on Housing and Buildings in support of Intro 826, introduced by Councilmember Helen Rosenthal. It would increase the penalty for violating the law against illegal hotels from the current range of $1,600 to $25,000 to between $10,000 and $50,000.

My bill to protect transgender New Yorkers, GENDA (the Gender Expression Non-Discrimination Act), has passed the Assembly and stalled in the Senate for eight years. Governor Cuomo announced on October 22 that the NYS Division of Human Rights will protect transgender rights by interpreting sex discrimination under the state Human Rights Law to include discrimination based on being transgender. This interpretation had been successfully adopted several years ago by the U.S. Equal Employment Opportunity Commission. This will protect all New Yorkers, and will apply to public accommodations, employment, housing, and all areas covered by the Human Rights Law.

After a comment period, the new regulations will take effect and people who believe they were subjected to gender identity or expression discrimination will be able to file complaints with the NYS Attorney General or the NYS Division of Human Rights.

We still need to get GENDA passed and signed into law. A future Governor could undo the new regulations, and transgender rights deserve to be in statute on their own, not as a subset of other rights. GENDA also would explicitly protect transgender victims under the hate crimes law.

On October 8, the Assembly Health Committee, which I chair; the Assembly Mental Health and Developmental Disabilities Committee chaired by Aileen Gunther; and Assembly Task Force on People with Disabilities, chaired by David Weprin held a public hearing in Albany on traumatic brain injury (TBI) services in New York. The hearing featured over 40 witnesses including TBI patients and their families, disability advocates, medical experts, and representatives of the NYS Department of Health (DOH) and TBI provider agencies. Witnesses discussed issues relating to services and protections available to Medicaid patients receiving care out-of-state, and alternative TBI therapies.

Every year, TBI results in more than 2,000 deaths, 19,000 hospital admissions, and over 100,000 emergency department visits throughout the state.

New York's Medicaid TBI program provides Medicaid services in the home, and plays a crucial role in letting TBI patients stay in environments less restrictive than nursing homes and long-term care facilities, when appropriate. The State had planned to move the program into Medicaid Managed Care on January 1, 2016, but after hearing concerns from patients and providers, I introduced legislation to delay the process until January 2017 and to require DOH to convene a work group on the issue to ensure that no services would be lost to patients in the transition. After the bill was introduced, the Department agreed to the delay and to the formation of the workgroup.

The hearing testimony confirmed that the existing program works well, and that the plan to move it to managed care could seriously under-mine the quality of services and care being received by patients. 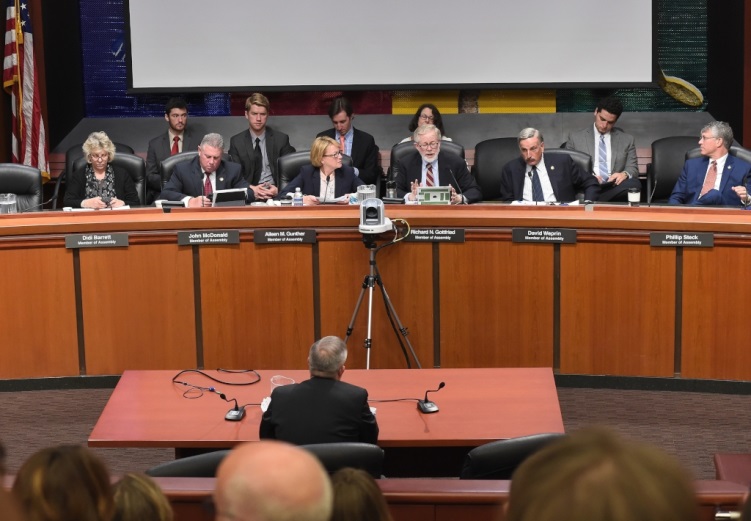 The Assembly hearing on services for New Yorkers with traumatic brain injury.

I was the 2015 recipient of the Paul Wellstone Award presented at the "activist dinner" that pre-ceded the annual American Public Health Association annual meeting in Chicago on Nov. 1. The award was started in 2007, after the death of Minnesota U.S. Senator Paul Wellstone, a great progressive leader. The first recipient of the award was Senator Ted Kennedy, and Senator Bernie Sanders received the award twice.

They honored me particularly for my work to enact a universal publicly-funded health plan (single payer) for every New Yorker - the New York Health Act. In my remarks, I talked about how we won Assembly approval of the bill this spring, and the work we have to do to get it passed in the State Senate and signed by the Governor.

Senator Wellstone often said: "We all do better when we all do better." That may be obvious to many of us, but a lot of people in political leadership don't seem to understand it.

The law that created New York's medical marijuana program was passed in 2014, and dispensaries are supposed to be up and running across the state by January 2016. However, there is a real danger that, come January, many seriously ill patients will still not be able to get access to medical marijuana prescribed for them by their physicians, and that their conditions will deteriorate, even to the point of placing their lives in jeopardy. These patients include young children with severe forms of epilepsy - the kind of medical condition that has been successfully treated with particular forms of medical marijuana in other states.

The Medical Marijuana Expedited Access Bill that I introduced in the Assembly, which passed the legislature in June with overwhelming bipartisan majorities, would give the NYS Department of Health (DOH) the flexibility to modify the 2014 law's requirements and regulations in order to speed up production and distribution for patients with the most urgent medical need.

I hope the State's system will be up and running on schedule. However, if problems develop, the bill could provide tools that DOH - and some desperately ill patients and their families - will be very grateful to have.

The bill would not undo any provisions or restrictions in the 2014 medical marijuana law, but it would give the Commissioner of Health the power to make exceptions if he finds it necessary.

I have had many discussions with the Cuomo administration about the bill for months and answered every question raised by his staff; I am not aware of any argument against the bill.

I have urged Governor Cuomo to sign the Medical Marijuana Expedited Access Bill to give DOH more options to get this medicine to patients desperately in need.

Last month, I joined students, educators, health care providers, and other State and City officials at the ribbon-cutting ceremony for the new school health center at the High School of Fashion Industries in Chelsea. Health care providers from the Institute for Family Health will provide medical, mental health, and, soon, dental care in a confidential setting at the new, state-of-the-art Center to the School's 1,800 students.

Services provided at school health centers include medical care (physicals, vaccines, care for chronic issues like asthma/diabetes, reproductive health care, and care for illnesses and injuries in school); mental health services (both for crises and ongoing needs); health education for individual students and in the classroom; and insurance enrollment for students and their families. The centers act as primary care providers for students who do not have one, or coordinate with students' usual source of primary care. The centers also connect students' families to neighborhood health centers where they can receive care, regardless of ability to pay.

One hundred and forty-two school-based health centers are sited in 339 schools in New York City, providing confidential health care services to students regardless of their insurance status or ability to pay for care. The NYS Department of Health oversees the program, providing grant funding to provider organizations like the Institute for Family Health to help them try to meet their expenses. Unfortunately, this funding is typically not adequate to cover fully the cost of providing comprehensive care.

As Chair of the NYS Assembly Committee on Health, I have long championed school-based health centers. Every school in New York State ought to have a school health center - and these centers need to have a steady source of government funding. 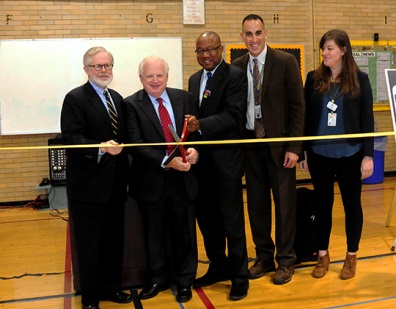 I joined Neil Calman, M.D., President and CEO of the Institute for Family Health; George Askew, M.D., the Deputy Commissioner for the Division of Family & Child Health at the NYC Department of Health & Mental Hygiene; Daryl Blank, Principal of the High School of Fashion Industries; and Caitlin Han-son, Director of School Health at the Institute for Family Health, at the ribbon-cutting ceremony for the new Falcon Health Center at the High School.