Wrongdoing by public officials deprives all of us of what good government should provide. It undermines public confidence in the political process and makes it more difficult for honest work to get done. Elected officials should be focused on the public interest, and not be "distracted" by personal or political interests.

Big money in election campaigns is the most serious corrosive force in politics all across the country. For many years, I've worked to enact a broad range of campaign finance reforms. The Assembly has repeatedly passed bills I have cosponsored to reduce campaign contribution levels, increase disclosure, provide public campaign financing (so people can run for office without having to be rich or get support from well-heeled interests), eliminating loopholes (like the "LLC loophole") that allow people to get around contribution limits, and tightening the law so campaign contributions are not used for personal expenses.

When elected officials have outside employment, there is too much opportunity for that to distort an official's judgment (whether consciously or not) and for outright corruption. I believe that serving as a legislator should be a full-time job, and I support eliminating outside employment for legislators. I have a law license, but I do not practice law. I am not anyone's employee or consultant, except the public. I have served as a full-time legislator for decades, as do many of my colleagues. That should be the rule for all of us.

We have enacted laws to increase disclosure of the financial interests of all elected officials, and should do more. We also need to strengthen enforcement of the laws requiring disclosure and punishing wrongdoing. These are just a few of the actions we need to take.

I have always fought for reforms to make our government more open and accessible. For me, being able to work for our community and help shape public policy for the values I believe in is a cherished privilege and public trust.

Last month, Governor Cuomo signed the Medical Marijuana Expedited Access Bill into law. This legislation, which I introduced in the Assembly in April, will give the NYS Department of Health (DOH) the flexibility to modify the requirements and regulations of the 2014 Compassionate Care Act in order to speed up production and distribution for patients with the most urgent medical need.

Governor Cuomo has done a very good deed for seriously ill patients and their families by signing the Medical Marijuana Expedited Access Bill. Thanks to their work and sharing their personal stories, this legislation and the Compassionate Care Act became law.

I know that DOH is working hard to get the medical marijuana law up and running on schedule, but glitches happen. This emergency access law is designed to get medicine to the neediest patients, including young children, as quickly as possible. It gives DOH flexibility to modify requirements of the current law and regulations to speed up production and distribution to patients with the most critical need.

For the most seriously ill patients, even minor delays - a day, a week, a month- are life-changing. 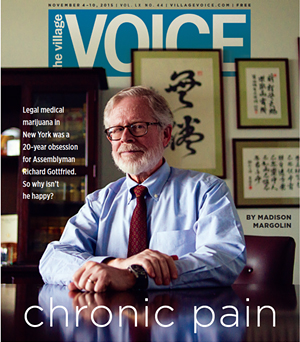 To learn more about the background about the long struggle to enact medical marijuana legislation in New York, read the cover story published in The Village Voice last month, available online at: http://www.villagevoice.com/news/why-the-architect-of-new-yorks-medical-marijuana-law-is-already-trying-to-change-it-7864748.

In November, I joined local elected officials and community residents to welcome the announcement by the NYC Department of Parks & Recreation that the unused Sanitation Department site in Chelsea at 140 West 20th Street between 6th and 7th Avenues will become a city park, and that it will provide $4.3 million in funding for the new park.

A determined and persistent group of local residents has been urging the City to support green open space on the quarter-of-an-acre site, once a parking lot, since 2010. They formed a community organization, "Friends of 20th Street Park," and raised $500,000 in private funding. They won the support of Councilmember Corey Johnson, me and our other local elected officials and Community Board 4, and we all worked to make this a reality. Last year the project received a $1 million grant through Councilmember John-son's participatory budgeting process.

Community Board 4 (CB 4) ranks 58th out of 59 community boards in the city in terms of the percentage of park land, and within CB 4, the blocks between 5th and 7th Avenues have the lowest percentage of open green space relative to developed land, according to the Parks Department.

The initiative to build a park on the site will now undergo an environmental review and processes for design, procurement and construction, which is expected to take about 3 years. Open public meetings to solicit community input on the site's design and function are scheduled to start next spring. Typically, the Parks Department completes capital projects like the building of a park in 30 to 48 months.

The creation of this park is a great example of what can happen when a group of people comes up with a great idea, and has the persistence to keep working on it, even if it takes years to see it through. Thanks to Mayor de Blasio and the Parks Department, and congratulations to the Friends of 20th Street Park!

"Fight for 15": NY to Raise Minimum Wage to $15 for All State Employees

On November 10th, I joined Governor Cuomo, other elected officials, union leaders, and labor activists at a rally in lower Manhattan for the Governor's announcement that State workers' hourly pay rate would gradually rise to $15 by the end of 2018 in New York City, with State workers in the rest of the state (where the cost of living is lower) reaching that level by the end of 2021. This will boost the pay of about 10,000 workers, about 6.5% of the State work force.

The state minimum wage is now $8.75 an hour " not enough to support a family in New York " and I have long advocated raising the hourly statewide minimum wage to $15 for all workers. As Governor Cuomo said at the rally, "if you work full time, you should have a decent life-style for you and your family."

In July, a New York State Wage Board acted to increase the minimum wage for workers at fast-food chains with at least 30 locations in New York State to $15 an hour in New York City by the end of 2018 and statewide by July 2021. Under New York law, the Labor Commissioner can convene a "wage board" to determine whether a category of workers is underpaid. If the board recommends a minimum wage increase for those workers, the Commissioner can then order it. 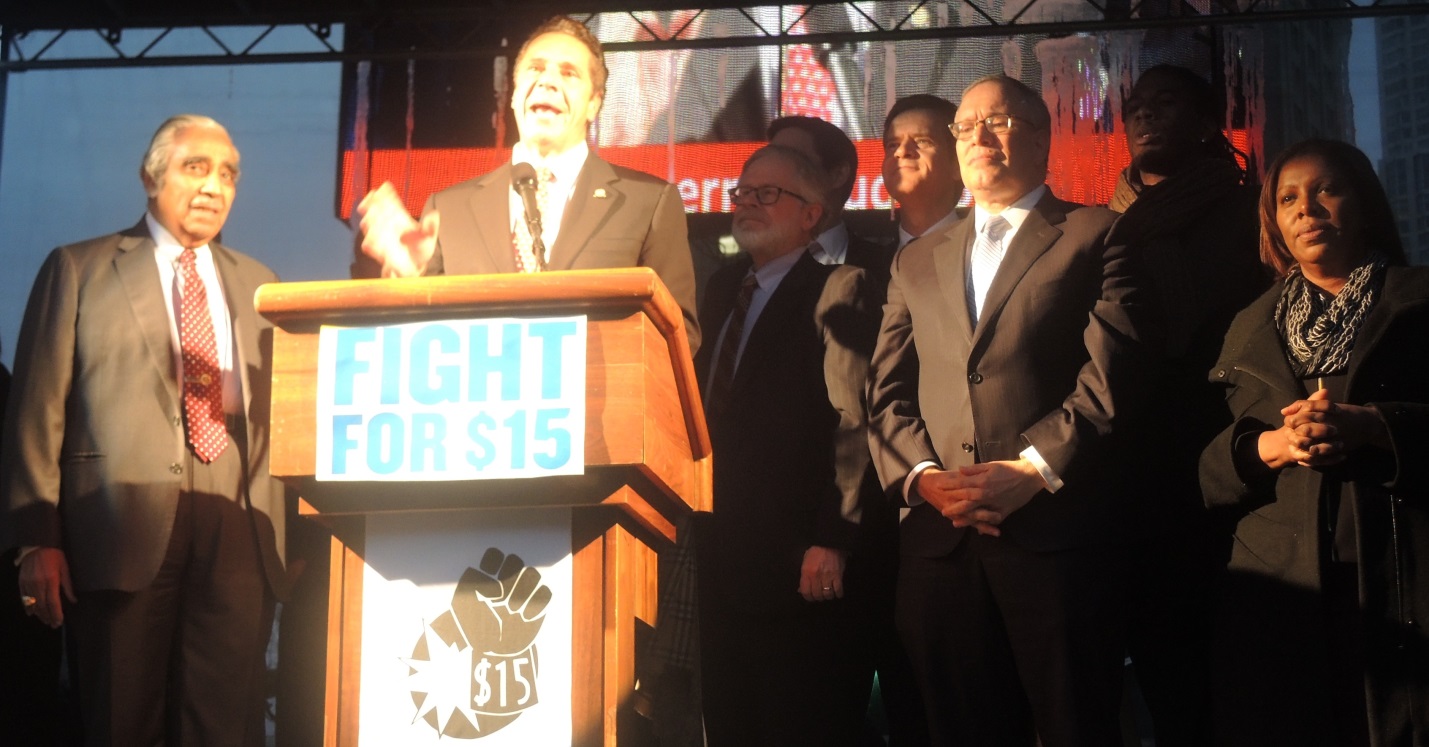 I joined Governor Cuomo and other NY leaders for his announcement that State workers' minimum pay will be raised to $15 an hour.

No Beer Garden at Pier 62

The day before Thanksgiving, the Hudson River Park Trust (HRPT) announced that it has dropped plans to locate a "biergarten" on Pier 62 in the Hudson River Park near 22nd Street, which would have had seating for 200 patrons. In October, I had submitted testimony to Community Board 4 expressing opposing the granting of a liquor license for the "biergarten." Many residents, community organizations and leaders, and other elected officials also opposed the plan.

The far end of Pier 62 is intended for quiet enjoyment of the park, with an exquisite view of the Hudson River. It is not an appropriate location for a commercial establishment of this kind and size. There has already been too much privatization of public spaces, especially park space, in New York City. The Pier 62 Biergarten would have been one more unwanted and inappropriate large-scale privatization of a much-loved public park.

HRPT and the Merchant restaurant group, which was proposing the biergarten, responded to the community's concerns and dropped the plan. Those of us concerned with preserving the peace, tranquility and public space at Pier 62 should appreciate this sound decision - and may-be even offer a toast, at an appropriate location!

The holiday season is upon us, which means a time for celebration -- and cooking!

The FDNY is reminding New Yorkers that cooking fires are the leading cause of home fires.

You can find more helpful FDNY safety tips online at http://www.fdnysmart.org/flash-facts/. Have a happy and safe holiday season! 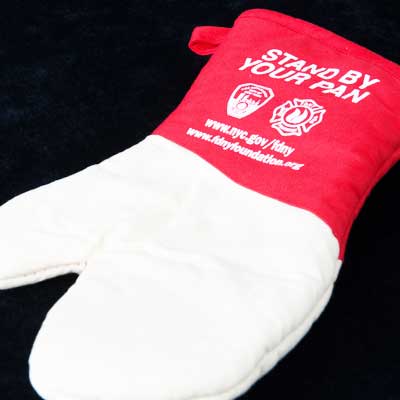 Community Groups Can Apply for a Citizens Committee Grant

From gardening and community organizing to oral history projects and healthy cooking workshops, the Citizens Committee of New York City offers grants of up to $3,000 to grassroots groups working on community-building projects across New York City.

The 2016 application is simple to fill out and can be found on the Citizens Committee's website at http://www.citizensnyc.org/grants/neighborhood-grants.

You can learn more about the Citizens Commit-tee's grants projects there, look through previously funded projects for inspiration, and find out if your group is eligible and what Citizens Committee grants can and cannot fund.

The Citizens Committee will also be holding grant application workshops in the coming months, in which the application process will be reviewed and prospective applicants can have their questions answered.