In his proposed state budget, Governor Andrew Cuomo proposed shifting responsibility for a huge in-crease in the cost for Medicaid from the State to the City, resulting in additional fiscal burden to the City of an estimated $656 million in the next two fiscal years. As Chair of the Assembly Committee on Health, I am firmly opposed to this and said that this cost-shifting scheme is "dead on arrival" in the Assembly.

New York is the only state that requires localities, like New York City, to shoulder part of the costs for Medicaid. But we have been ratcheting down the "local share" for years. Now the Governor wants to radically reverse course - but only for New York City.

In the upcoming budget negotiations, as chair of the Assembly Health Committee I will be leading the Assembly effort to defeat this effort. 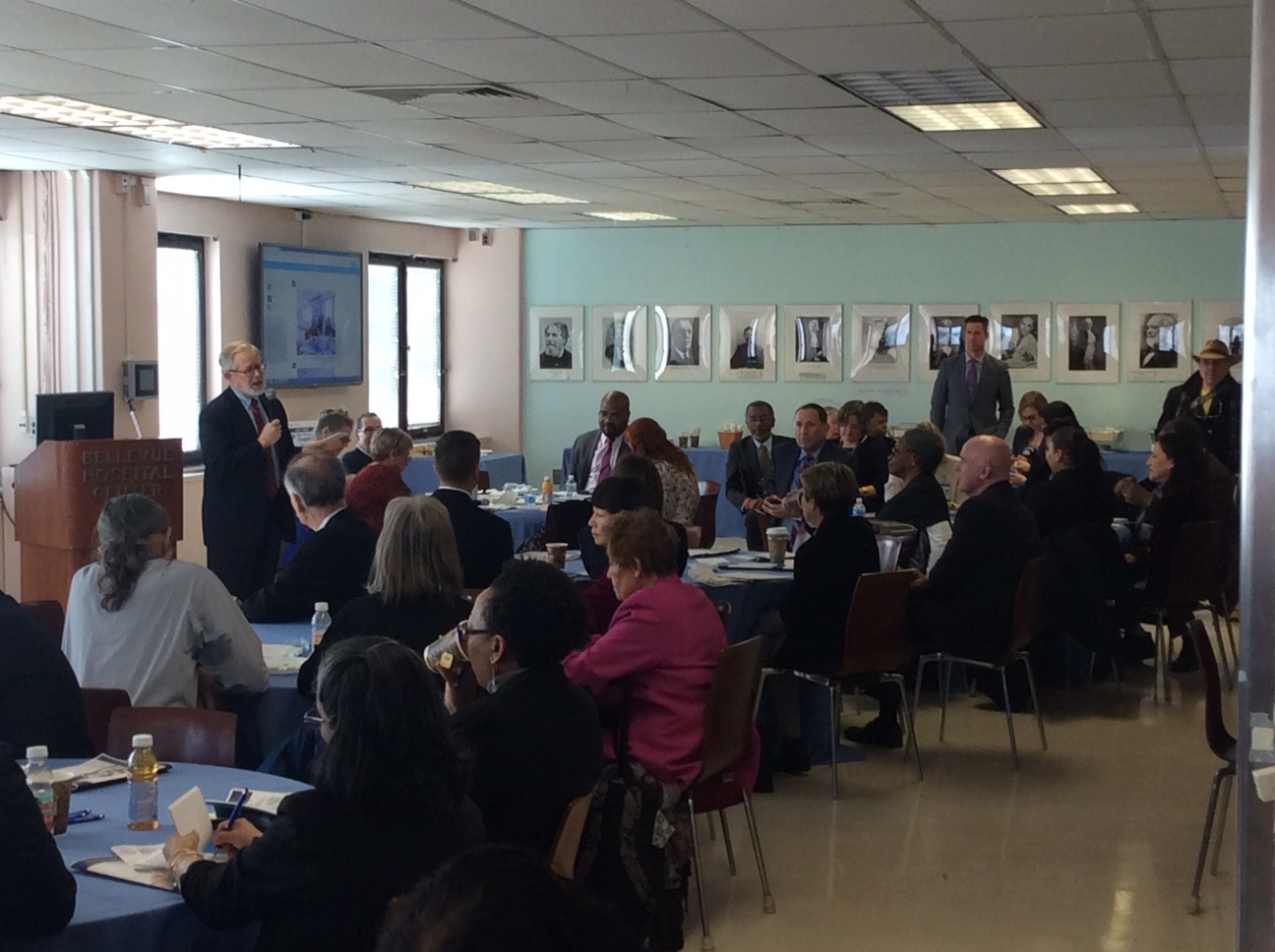 PROTECTING MEDICAID IN NYC: At the Bellevue Hospital legislative breakfast in February, I spoke about the impact the Governor's proposal to shift more Medicaid costs from the State to the City could harm New Yorkers.

Last year, Governor Cuomo and Mayor de Blasio reached an agreement to fund the capital plan of the Metropolitan Transportation Authority (MTA) for our subways and buses. The State and City both agreed to increase their funding.

You may remember that before the agreement was reached, Mayor de Blasio expressed concern about how secure the State's commitment would be.

Governor Cuomo's Budget submitted in January did not include any new funds for the MTA's Capital Program. Nor did it provide any funding stream for the MTA to generate the revenue needed to fund its capital budget. Instead, the budget proposal requires the MTA to exhaust all other means of funding, including taking on more debt (which would likely be paid for by fare increases), before turning to the State for new funding.

The MTA will certainly use whatever sources of funding are available. But those are funds for the previous capital plan. The agreement this fall was for funding for the next phase of the capital plan, to keep up with repairs, and improvements.

I have signed on to a letter to the Governor written by my Assembly colleague James Brennan (D/WFP-Brooklyn), Chair of the Committee on Corporations, Authorities, and Commissions, asking the State to honor its commitment to the riding public. In our letter, we asked the Governor to appropriate one quarter of the capital funding promised to the MTA " $1.825 billion " for each of the next four years, or to provide the MTA with a mechanism to raise the needed revenue to begin implementing its capital plan.

The City University of New York (CUNY) is a crown jewel of public higher education in New York. In his recent budget presentation, however, Governor Cuomo proposed cutting approximately one-third of CUNY's budget, or about $485 million, and shifting responsibility for that funding from the State to the City. That would cause a net reduction in CUNY's operating budget, with an immediate and direct impact on CUNY students and personnel, and would follow previous State budget cuts that have already been imposed on CUNY.

Cutting CUNY would undermine our efforts to re-duce income inequality and promote opportunity. CUNY offers a pathway to higher education for New Yorkers from diverse racial, ethnic, and socioeconomic backgrounds. More than 80% of all African-American and Hispanic undergraduates in New York City attend CUNY institutions, and it is among the most diverse universities in the world.

I am strongly supporting the Assembly's effort in budget negotiations to reject this proposal and increase State support for CUNY.

My mother and father " children of immigrants" earned their degrees at Hunter College and City College. They could afford it because it was fully paid for by the public, even in the midst of the Depression. When I was growing up, the opportunities they were able to give me were a direct result of what New York gave to them. 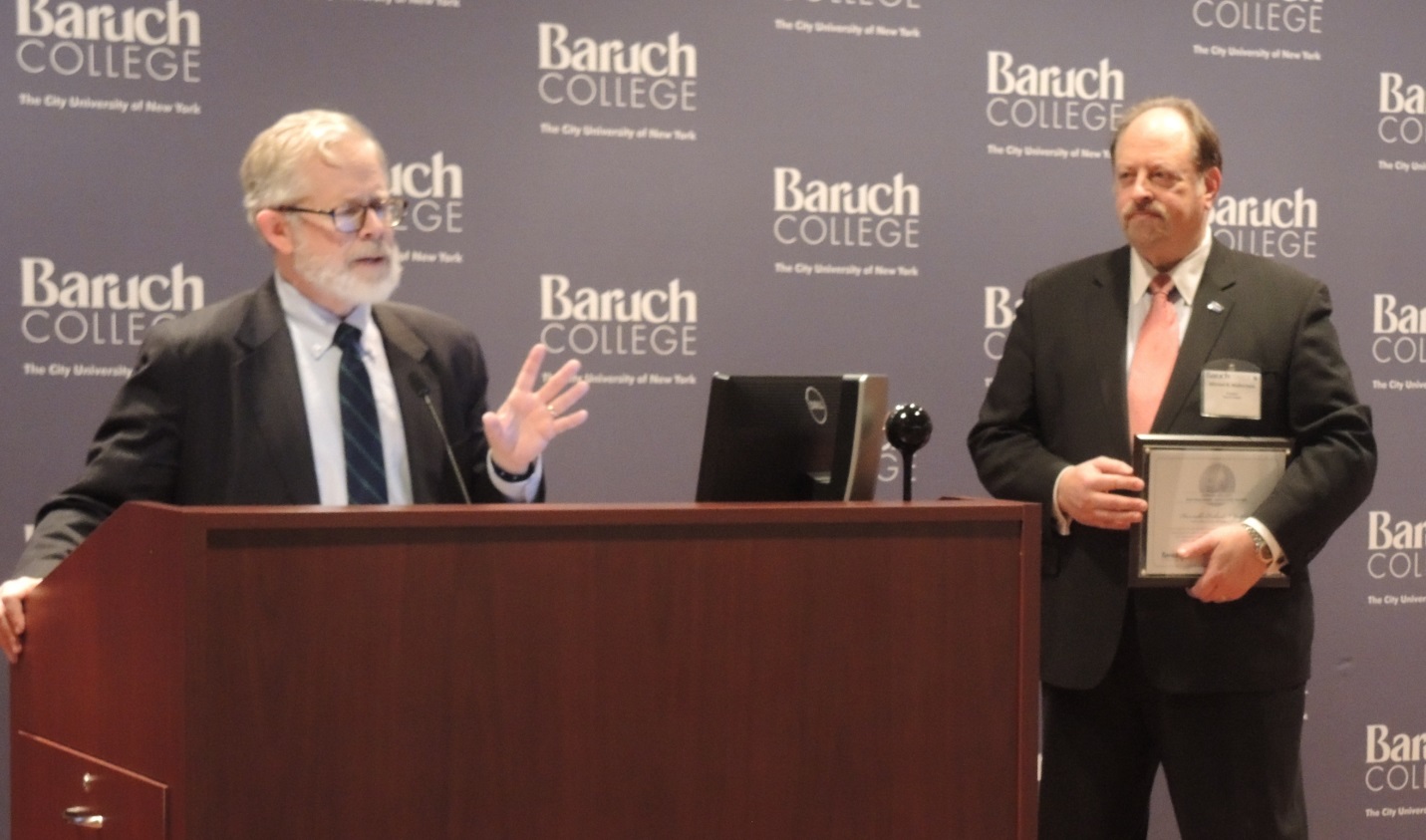 FIGHTING CUTS TO CUNY: I am fighting the proposal to impose more cuts on CUNY. Both my parents attended CUNY colleges and I am proud to represent institutions like Baruch College and the CUNY Graduate Center in the Assembly. Here, I am shown speaking at Baruch last December.

Fighting Back Against Illegal Hotels

In February, I joined hundreds of New Yorkers rallying in the State Capitol against the growing threat to affordable housing, public safety, and our quality of life posed by illegal hotels and the rise in illegal short-term rentals in residential apartments. It's a problem that is growing with the advent of online sites that broker this illegal activity, like Airbnb.

Illegal hotels create problems for residents and tourists alike. For those living in buildings where neighbors illegally rent out their units for short-term stays, this can mean strangers coming and going at all hours, creating security, noise, and other concerns.

Hotels in New York City have stricter fire and safety codes than residential buildings. Often, tourists who book apartments online arrive from out of town to find the room they paid for in advance is not what they were promised. It may be dirty, bug-infested, or without clean linens or other services. These short-term visitors are stuck, with nowhere to lodge a complaint, since there are no front desk clerks or concierges in the lobby of illegal hotels. Airbnb calls this "sharing." That's not what my parents taught me.

In 2010, the Legislature passed the Illegal Hotel Law sponsored by Sen. Liz Krueger and me to make the law against this illegal use clearer and easier to enforce, and the City Council passed a local law raising the penalties. Mayor de Blasio and the Council have increased funding for the Mayor's Office of Special Enforcement, which enforces the law.

In Albany, we are fighting to strengthen the law and protect it against Airbnb lobbying to gut it. 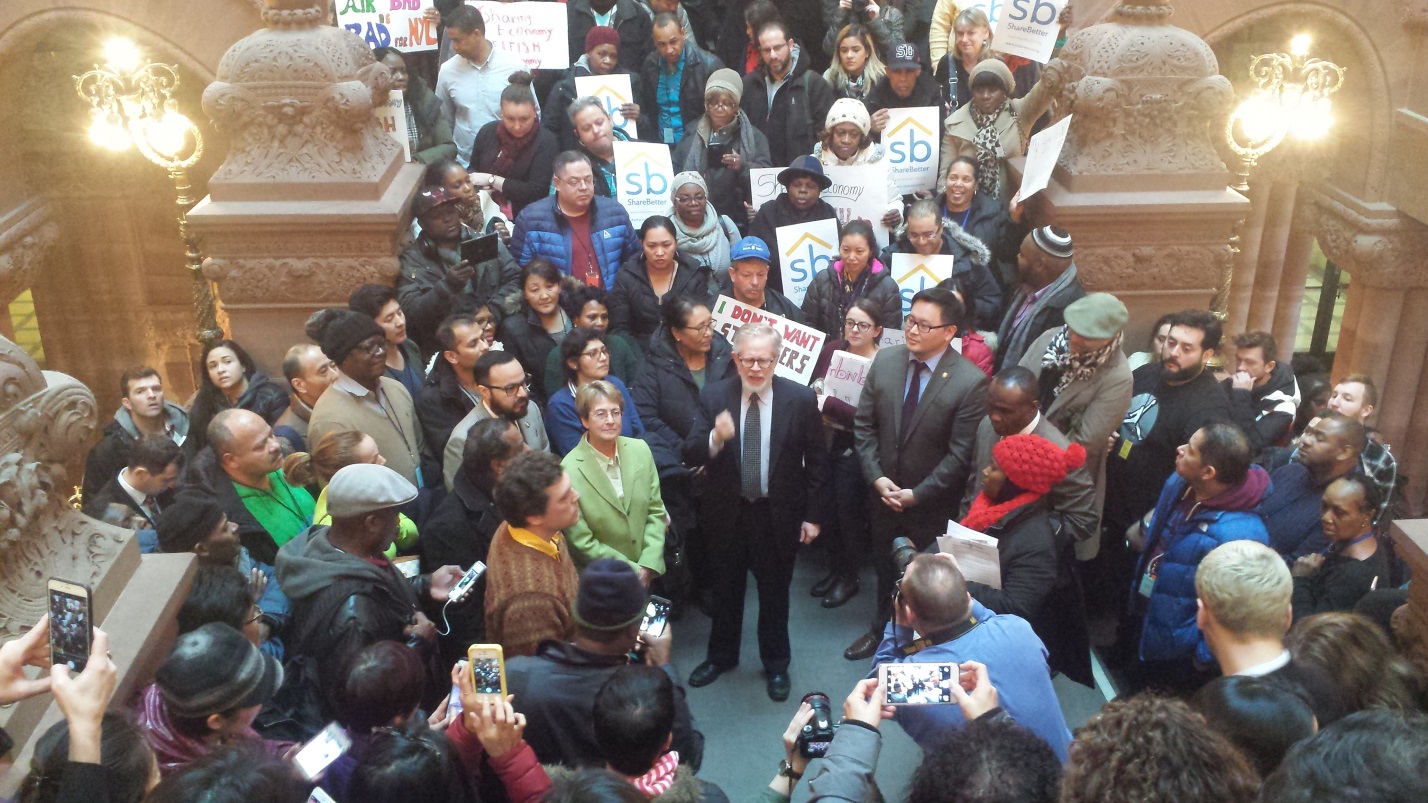 NO ROOM AT THE INN FOR ILLEGAL HOTELS: Speaking at a rally last month in the State Capitol against the proliferation of illegal hotels in New York.

In February, NYS Senator Bill Perkins (D/WFP-Manhattan) and I were the featured speakers at a forum sponsored by Physicians for a National Healthcare Program/Metro NY Chapter on the New York Health Act, the bill we've introduced to establish publicly funded universal health care in New York State.

We spoke about how taking insurance companies out of the picture would bring New Yorkers net savings of $45 billion a year, by eliminating insurance industry administrative costs and profit and the administrative costs health care providers incur to fight with insurance companies. The New York Health Plan created by the Act would also be able to negotiate much lower prices with drug companies. It would also eliminate the more than $2 billion that New York employers spend reviewing and administering health plans.

The New York Health Act passed the Assembly last year by a 92-52 vote. We will vote on it again this year, and keep the pressure on to pass it in the State Senate. We're changing the conversation about single-payer from "a great idea, but too bad it could never happen" to making it truly achievable.

The U.S. Supreme Court is now considering Whole Woman's Health v. Hellerstedt, a reproductive freedom case. Four state legislators around the country sub-mitted a "friend of the court" brief in that case relaying their own personal experiences having an abortion. The legislators were then subject to bitter attacks from anti-choice activists around the country.

I added my name to a joint letter signed by hundreds of legislators around the nation expressing solidarity with our four brave colleagues.

I'm a founding member of the Legislature's Bipartisan Pro-Choice Caucus, founded by Senator Liz Krueger (D/WFP-Manhattan). The Caucus recently opposed legislation introduced in the Assembly (A. 9061) to prohibit State and county government funding for Planned Parenthood. Thankfully, New York is a state where a bill like that has no future.

In February, NYS Senator Bill Perkins (D/WFP-Manhattan) and I were the featured speakers at a forum sponsored by Physicians for a National Healthcare Program/Metro NY Chapter on the New York Health Act, the bill we've introduced to establish publicly funded universal health care in New York State.

Federal, State, and City taxes are due April 15. There are several free resources to help New Yorkers prepare their returns and get information about tax credits that can be worth up to $10,000.

Every year, thousands of New Yorkers " about one in five " miss out on up to $10,000 in tax credits, like the Earned Income Tax Credit (EITC) or the Child Care Tax Credit (CCTC). The free assistance at many tax preparation sites can help eligible New Yorkers qualify for these credits when filing their returns.

All individuals earning up to $62,000 annually can prepare and e-file federal tax returns on-line for free by using the IRS' "Free File" program. (About 70% of all taxpayers are eligible for Free File.) To learn more, go to www.IRS.gov/freefile.

Any New York City resident earning up to $62,000 annually can also obtain free on-line assistance by going to www.nyc.gov/taxprep. The online service is easy and secure; please use a secure computer to protect your privacy. You can also call 311 and ask for tax preparation assistance.

In our community, AARP's "Tax-Aide" program offers free tax preparation help on Tuesdays and Wednesdays through April 13 at the Science, Industry, and Business Library at 188 Madison Ave. at 34th St. Doors open at 10 am, and tax filers are taken on a first come, first serve basis. To learn more, please call (917) 275-6975. Other AARP sites in or near our area include the Muhlenburg Library and the Fulton Senior Center in Chelsea; the Community Church in Murray Hill; Project Find and the Riverside Library on the Upper West Side; and the Epiphany Library in Kips Bay.

The City Department of Consumer Affairs has dozens of "Volunteer Income Tax Assistance" (VITA) sites across the five boroughs where New Yorkers with in-come under certain limits can file their taxes for free " including several in our community. At these sites, free, in-person tax preparation is offered to New Yorkers with children who have annual incomes up to $53,000, or to those without children earning up to $18,000. Call 311 for more information, or see http://www1.nyc.gov/site/dca/consumers/file-your-taxes.page.

If you earn $62,000 or less, you may qualify for free tax prep services, including online filing and in-person filing with an IRS certified VITA/TCE volunteer preparer.