On April 1, the Assembly and the State Senate passed the 2016-17 New York State budget. The $147.2 billion budget will raise the minimum wage in stages, enact the most expansive paid family leave policy in the country beginning in 2018, and cut taxes for the approximately six mil-lion New Yorkers earning between $40,000 and $300,000 a year. It also increases aid to public schools by $1.5 billion and provides $27 billion for the MTA's five-year capital plan.

I worked hard with my colleagues in the Assembly to block two of the Governor's budget proposals that would have seriously harmed New York City, especially the City University (CUNY) and Medicaid funding.

The Governor had proposed shifting hundreds of millions of dollars in Medicaid costs from the State to the City (please see following article). In addition, the Governor sought to cut State support for the CUNY by $485 million. CUNY plays a critical role in the fight to promote opportunity and re-duce income inequality in New York, and the Assembly blocked the proposed cut. The new State budget also prevents a tuition increase at CUNY and SUNY institutions.

In keeping with the Assembly's commitment to promote the achievement of all students, the enacted budget earmarks $20 million for the My Brother's Keeper Initiative to implement the Board of Regents recommendations to improve outcomes for boys and young men of color.

New York's Paid Family Leave initiative will be the most expansive in the country. Beginning Jan. 1, 2018, a worker will be able to take 12 weeks of paid leave to care for a newborn or newly adopted child, a family member with a serious health condition, or in case another family member is called to active military service. When the program first begins, employees can receive half of their average weekly wages (not to exceed half of the statewide average weekly wage). After the program is fully phased in, workers can earn up to 2/3 of their weekly wage (capped at 2/3 of the statewide average weekly wage). An employee is eligible after serving in a job for at least six months. 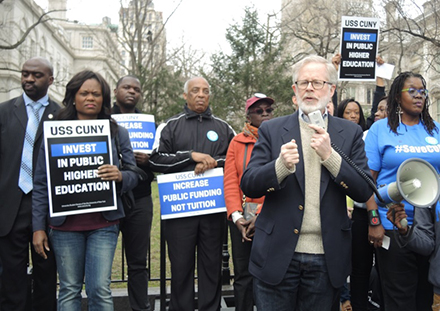 FIGHTING CUTS TO CUNY: Last month, I spoke at the City Hall park rally to "Save CUNY" from more State funding cuts. Both my parents attended CUNY colleges and I am proud to represent institutions like Baruch College and the CUNY Graduate Center in the Assembly.

The 2016-2017 State budget Gov. Cuomo presented in January proposed shifting more of the cost of Medicaid from the State to the City, which would cost city taxpayers $300 million in the 2017 fiscal year, and even more in the following years. As Chair of the Assembly Committee on Health, I helped lead the opposition to this cost-shifting scheme, working with Speaker Carl Heastie. We succeeded in killing the proposal.

New York is the only state that requires localities, like New York City, to pay part of the costs for Medicaid. The "local share" of the burden had been gradually ratcheted down over the years. The Governor proposed radically reversing course - but only for New York City.

We reached an agreement to maintain the limit on localities' Medicaid cost, and to set a $250 million target to be reached by achieving cost savings and efficiencies in the state's Medicaid program.

The Port Authority of New York and New Jersey is conducting an international competition for the design of its new bus terminal between Eighth and Ninth Avenues and 41st and 42nd Streets. The Port Authority is also asking members of the public to submit their comments and suggestions.

Members of the public - particularly commuters and New Yorkers living in the neighborhood around the bus terminal - are invited to submit comments to the Port Authority via an online survey that will be available throughout the competition.

To submit your comment to the Port Authority about what you'd like to see in the new bus terminal, please fill out the survey at https://www.surveymonkey.com/r/L6525NT.

Fighting to Save an Affordable Supermarket in Chelsea

Last month, I joined residents of Chelsea and the West Village at a rally organized by Councilmember Corey Johnson outside the Associated Supermarket at 255 West 14th Street near Eighth Avenue. It's being forced out because building owner Pan Am Equities wants to increase the rent to about $200,000 a month, more than six times the current rent. Closing this supermarket will deprive community residents of an important source of affordable food, and we're fighting to keep it open!

We must do more to help small businesses in New York City stay in place so they can survive and thrive. This is particularly challenging in Manhattan's increasingly expensive real estate market. I'm joining with elected officials and community activists to support Manhattan Borough President Gale Brewer's proposal for mandatory lease negotiation and mediation, with the option of a short-term lease extension.

SAVE OUR SUPERMARKET: In March, I joined local residents and Public Advocate Tish James, Congressman Jerry Nadler, and State Senator Brad Hoylman at a rally organized by Councilmember Corey Johnson to protest the outrageous rent hike demand that may force the closure of the Associated Supermarket on W. 14th Street, one of the few affordable grocery stores left in the area.

Federal, State, and City taxes are due April 18 this year. There are several free resources to help New Yorkers prepare their returns and get information about tax credits that can be worth up to $10,000.

Every year, thousands of New Yorkers - about one in five - miss out on up to $10,000 in tax credits, like the Earned Income Tax Credit (EITC) or the Child Care Tax Credit (CCTC). The free assistance at many tax preparation sites can help eligible New Yorkers qualify for these credits when filing their returns.

All individuals earning up to $62,000 annually can prepare and e-file federal tax returns on-line for free by using the IRS' "Free File" program. (About 70% of all taxpayers are eligible for Free File.) To learn more, go to www.IRS.gov/freefile.

Any New York City resident earning up to $62,000 annually can also obtain free on-line assistance by going to www.nyc.gov/taxprep. The online service is easy and secure; please use a secure computer to protect your privacy. You can also call 311 and ask for tax preparation assistance.

In our community, AARP's "Tax-Aide" program offers free tax preparation help on Tuesdays and Wednesdays through April 13 at the Science, Industry, and Business Library at 188 Madison Ave. at 34th St. Doors open at 10 am, and tax filers are taken on a first come, first serve basis. To learn more, please call (917) 275-6975. Other AARP sites in or near our area include the Muhlenburg Library and the Fulton Senior Center in Chelsea; the Community Church in Murray Hill; Project Find and the Riverside Library on the Up-per West Side; and the Epiphany Library in Kips Bay.

The City Department of Consumer Affairs has dozens of "Volunteer Income Tax Assistance" (VITA) sites across the five boroughs where New Yorkers with income under certain limits can file their taxes for free - including several in our community. At these sites, free, in-person tax preparation is offered to New Yorkers with children who have annual incomes up to $53,000, or to those without children earning up to $18,000. Call 311 for more information, or see http://www1.nyc.gov/site/dca/consumers/file-your-taxes.page.

If you earn $62,000 or less, you may qualify for free tax prep services, including online filing and in-person filing with an IRS certified VITA/TCE volunteer preparer.

The first phase of the Second Avenue Subway is scheduled to open in December 2016, with new stations at E. 96th, 86th, and 72nd Streets. The new "Q train" subway route will also include stops at Lexington Avenue and 63rd Street and connect to the Broadway line express tracks at the 57th Street-7th Avenue Station.

For more information about the proposed service plan or to pre-register to speak at the hearing, please see the MTA's website at www.mta.info. Members of the public wishing to speak can also register in person at the site of the hearing on April 7 between 4:00 and 7:00 pm.

The MTA is holding a public hearing on its proposed revision of the M5 bus route in Manhattan. The hearing will take place on Wednesday, April 20 at 5 pm at the MTA's offices in lower Manhattan at 2 Broadway on the 20th floor.

The M5 is a 12-mile, north-south route that provides local and limited-stop bus service be-tween the George Washington Bridge Bus Terminal (at West 178th Street) and the South Ferry Terminal, and serves approximately 11,700 daily riders. (In our Assembly District, the M5 travels along Fifth and Sixth Avenues below 59th Street and briefly along Central Park South.)

Because the current route is long, unwieldy, and contributes to extensive delays and irregular service, the MTA is proposing to split the M5 into two separate routes, with the southern route (a new M55 route) extending between W. 37th Street and the South Ferry Terminal, and the northern route running between the George Washington Bridge Bus Terminal at W. 178th Street and W. 37th Street.

MTA officials believe that splitting the M5 route into two shorter routes will help to mitigate the effects of delays along the route while allowing for better recovery from delays and providing more even and reliable service for customers.

To speak at the hearing, you must register in advance either by telephone (646-252-6777), online at http://mta-nyc.custhelp.com/app/hearings/register/h_id/8 or in person at the hearing. Presentations will be limited to 3 minutes.

You may also submit comments online. All written comments must be submitted by April 27. For more information, see http://web.mta.info/mta/news/hearings/#M5-Bus