CB 7 Roundtable on "Health Care in the Community"

We talked about increasing access to primary care; the restructuring of services under Medicaid; providing care to immigrants and overcoming language barriers in health care delivery; and the ways in which my universal single-payer health care bill would provide every New Yorker full comprehensive health coverage without deductibles, copays, or restricted provider networks, and funded based on ability to pay. It would lower costs for almost every New Yorker.

The bill, the NY Health Act (A5062 /S3525), is sponsored by Senator Bill Perkins and passed the Assembly with a huge majority vote last year and has 22 co-sponsors in the State Senate.

The bill will be voted on again this year in the Assembly and we are working to get more support in the Senate. This year's Statewide Single-Payer Lobby Day & Rally in Albany will be on Tuesday, May 24. Transportation to Albany will be provided from all across the state, including buses from Manhattan. Please join us! To find out more, please contact the Campaign for New York Health online to http://www.nyhcampaign.org/ and click on the banner for "Statewide Lobby Day," or email info@nyhcampaign.org. And while you're on the site, don't forget to join the Campaign!

Catch a Free Movie 'Under the Stars' in a City Park!

Mayor de Blasio's Office of Media & Entertainment and the NYC Department of Parks & Recreation have announced this season's schedule of "Movies Under the Stars," a series of free outdoor movie screenings in parks all across the five boroughs. This month in our Assembly District, there will be showings of "Peaceful Warrior" on Thursday evening, May 19, and of "Annie" on Friday, May 27, both in Chelsea Park at 27th Street and Ninth Avenue. All viewings begin shortly after sundown.

For the complete listings of free outdoor movies in all five boroughs, please see http://www1.nyc.gov/site/mome/news/movies-under-stars-16.page, or call 311.

The Port Authority of New York and New Jersey (PANYNJ) is conducting an international competition for the design of a new bus terminal between Eighth and Ninth Avenues and 41st and 42nd Streets. Members of the public - particularly commuters and New Yorkers living in the neighborhood around the bus terminal - are invited to submit comments to the Port Authority through an online survey that will be available throughout the competition. Most of the options they are considering are unacceptable to the community, me included. I believe it is wrong for the Port Authority to solicit lavish designs before making basic planning decisions that the community can live with.

On April 18, Community Board 4, State Senator Brad Hoylman and I hosted a public town hall meeting at Metro Baptist Church in Hell's Kitchen about the Port Authority's plans. PANYNJ officials explained the process for the design competition for the new terminal, and heard the adamant concerns voice by the community. You can find the PANYNJ summary of its presentation at the meeting by going online to: www.panynj.gov/bus-terminals/pdf/2016-04-18-PABT-TownHallForum_Presentation.pdf

The terminal is in bad shape, cannot accommodate future volume, and likely needs to be replaced. But I believe that can and must be done using existing Port Authority property - and not destroying homes and businesses in Hell's Kitchen. Holding a design competition before a comprehensive planning process puts the emphasis on form over function. Having this "beauty contest" up front will turn the discussion into "Oh, we have such a beautiful world-class design - why would anyone want to deprive NYC of this gem! So sorry, but we will just have to condemn homes and small businesses to accomplish it."

All but one of the Port Authority's "concepts" involve tearing down buildings in Hell's Kitchen. Why? Because those options use a lot of the existing Port Authority land for new office towers, instead of bus capacity! Without that commercial development plan, there would be no need to take more of Hell's Kitchen.

I appreciate the Port Authority's willingness to come to a town hall to hear the community's concerns. Yet clearly lacking in the process is thorough planning and sensitivity to the community impact. For the best results, there needs to be an open planning process that includes the information gleaned from the trans-Hudson Commuting Capacity Study the Port Authority has commissioned; and the bus terminal's community and its local elected officials, its users, and the City to figure out if a new terminal is really needed and if so, where it should go, considering all the things the Port Authority says are its key objectives: improving safety and security, minimizing traffic on local streets, meeting the needs of both commuter and long-distance bus travelers, and improving bus parking and staging while also meeting the needs of the neighboring community. Then there could be a design competition.

To submit your comments to the Port Authority about what you'd like to see in the new Bus Terminal, please fill out the survey at www.surveymonkey.com/r/L6525NT.

I strongly support the community's effort to preserve both 404 West 20th Street and the Hopper Gibbons House, whose historic integrity I've been fighting to preserve for almost a decade. I joined local residents, members of community and preservationist organizations including Save Chelsea, Community Board 4, and the Council of Chelsea Block Associations, and elected officials Manhattan Borough President Gale Brewer and Council Member Corey Johnson at a rally to preserve 404 West 20th Street. The LPC took our arguments into account at its June 14 hearing, when LPC members expressed concern about the overall scale of the owner's plans, and ordered the owner to revise them for a second time, and return for a future hearing.

To learn more, you can tune in to the next episode of "Represent NYC" that I'm hosting on the Manhattan Neighborhood Network at 7:00 p.m. on Sunday, July 10th on Time Warner Cable (Channel 34), RCN (Ch. 82), and FiOS (Ch. 33), and then be rebroadcast on those stations on Wednesday, July 13th at 9:00 p.m.. My guests Andrew Berman of the Greenwich Village Society for Historic Preservation and Fern Luskin of Friends of Hopper Gibbons House Underground Railroad Site. 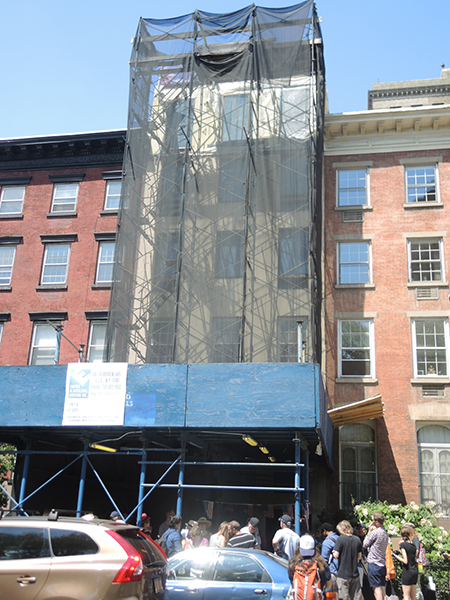 SAVING A PART OF CHELSEA'S HISTORY: The June rally to save the Hopper Gibbons House. The illegal fifth story addition can be seen atop the historic building.

Changes required by the Executive branch as conditions of signing the Compassionate Care Act into law and Health Department regulations drastically limited the scope of New York State's new medical marijuana program. In April, the Committee on Health reported bills that would:

Other legislation reported out of the Assembly Committee on Health included:

For more information on a particular bill, including its text, supporting memorandum, and information on its status, please go to: http://public.leginfo.state.ny.us/menuf.cgi.