The Mount Sinai Health System is proposing to cut its inpatient capacity at Beth Israel Hospital at 1st Avenue at 16th Street, relocate the hospital to a smaller facility on East 14th Street, and sell the site on which the hospital is currently located.

I am working with all the local elected officials, community boards and many others in the area south of 34th Street to make sure that the com-munity's health care needs are fully met. We will be working closely with the Mount Sinai system to monitor their plans and make sure they respond to community input. We will also work with state and city agencies that have regulatory and approval responsibilities.

Mount Sinai officials have stated publicly that Beth Israel, which suffered an operating loss of $115 million last year, will remain open at its current location before it moves to the new building (in about four years), and that Beth Israel's primary care, behavioral, and outpatient surgery services would be expanded during that period and after. They also stated that the new building will have 70 or more beds. It will have an emergency department offering the same services it now provides.

Mount Sinai's plan also includes the expansion of outpatient facilities at three sites in the area, with more than 35 operating and procedure rooms, and 16 physician practice locations to be used by over 600 doctors. They have also entered into discussion with labor unions representing doctors, nurses, and other hospital employees and given assurances that job security and benefits for unionized workers would be protected, although some may be reassigned to other facilities in the Mount Sinai Healthcare System.

Community members, health care advocates, and elected officials are rightly deeply concerned. Especially after the 2010 closure of St. Vincent's Hospital in the West Village, it is important to make sure that lower Manhattan neighborhoods are not underserved.

In June, I joined Governor Andrew Cuomo, a bipartisan contingent of State legislators, and hundreds of New Yorkers for the signing of a package of legislation to combat heroin and opioid abuse.

The new laws, which I helped write as Chair of the Assembly Health Committee, will let patients begin treatment before getting insurance company authorization; make insurance companies comply with objective, State-approved guidelines when evaluating patient needs; fund more beds and treatment slots; and increase the availability of naloxone, which can help reverse the effects of an overdose, and require insurance to cover its cost. The new law also requires doctors and other providers to take periodic updating education or training about pain management, palliative care, and drug abuse. That was a bill Assembly Member Linda Rosenthal sponsored and I co-sponsored for several years.

It was good to hear Gov. Cuomo say about health insurance companies: "They are not your friend."

To find help for a person seeking alcohol or substance abuse treatment, New Yorkers can contact the NYS Office of Alcoholism and Substance Abuse Services by calling 1-877-8-HOPENY, texting HOPENY (467369), or going online to www.oasas.ny.gov/accesshelp. 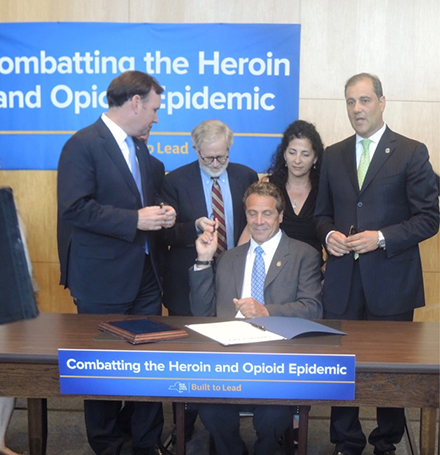 In June, the New York City Landmarks Preservation Commission (LPC) held hearings on two of Chelsea's oldest buildings that are under attack: the Hopper Gibbons House at 339 West 29th Street in the LaMartine Place Historic District, and 404 West 20th Street, the oldest house in the neighborhood in the Chelsea Historic District. Before each of the LPC hearings, Chelsea residents and advocates held rallies to preserve the historic integrity of both homes.

At Hopper Gibbons House - the only known Underground Railroad site in Manhattan, which was frequented by famous abolitionists like Frederick Douglass and William Lloyd Garrison - a nine-year-long battle has been waged to force the building owner to remove an illegal fifth story addition and to cease his excavation of the building's basement and foundations, moves that threaten the historic integrity of this link to New York's past.

At 404 West 20th Street, the new owner intends to demolish virtually all of the house except its façade, and to expand the structure significantly, eliminating its unique side yard and increasing the building's height and bulk, more than doubling the size of the 4,000-square-foot home. The house was originally built in 1830 on property owned by the famous writer Clement Clarke Moore, and is part of the celebrated "Cushman Row" of townhouses in the Chelsea Historic District. 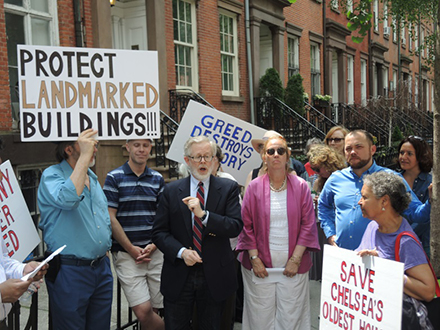 PRESERVING CHELSEA'S HISTORY: I spoke at the rally in June to save 404 W. 20th Street, the oldest house in Chelsea, along with Borough President Gale Brewer and Councilmember Corey Johnson. 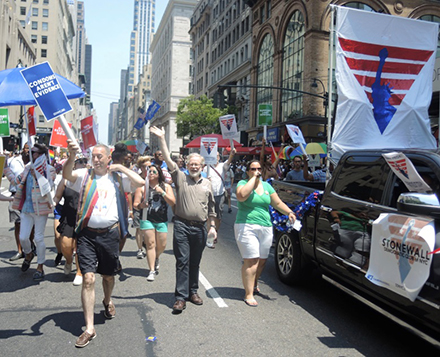 MARCHING IN PRIDE: I march in the LGBT Heritage of Pride Parade every year. This year we mourned the victims of the massacre in Orlando, and celebrated the strength and diversity of New York's thriving LGBT community.

The "Down To Earth" Farmers Market has started its 2016 season in Chelsea - a great chance to get fresh, locally grown fruits and vegetables, as well as a variety of artisan products.

Every Saturday from 9:00 a.m. to 5:00 p.m., vendors will be offering produce and other healthy food on West 23rd Street between 8th and 9th Avenues. The Farmers Market will be open until October.