Congregation Shearith Israel (CSI), on West 70th Street at Central Park West in the Upper West Side/Central Park West Historic District wants to put up a nine-story building, including five top floors of luxury-priced apartments, which would reach an overall height of more than 119 feet, instead of the 75 feet allowed for most of the site under current zoning. The proposed building is too tall and out of character with the architecturally and historically significant buildings that line the side streets of the Historic District in the immediate vicinity of the synagogue. It would continue the dangerous trend of developers and property owners pushing high-priced development beyond the City's zoning and historic preservation rules.

CSI's plan was rejected by Community Board 7 in 2007, but was approved by the City Board of Standards and Appeals. Now, because so much time has gone by, CSI has to get re-approval by the BSA, but it has made changes to its plan - making it worse.

In July, I testified before the Land Use Committee of CB7 to oppose the application.

In response to CSI's significant revisions to its plans, the BSA wrote to the Congregation's attorneys requiring them to answer a list of 40 questions that CSI will need to address before a BSA hearing can be scheduled on the revised plan.

While Shearith Israel has revised its plans several times, but the underlying issues that make the plan so troubling have not changed. It should be rejected by the Board of Standards and Appeals.

New Port Authority Bus Terminal: What Would It Mean for Our Community?

The Port Authority (PA) Bus Terminal on Eighth Avenue is in bad shape and inadequate. The PA plans to replace it. I'm fighting to make sure that does not include tearing down more of our area's housing, local-ly owned businesses, a church and historic buildings, whether by eminent domain or otherwise. We've lost too many affordable homes and businesses in Hell's Kitchen in recent years. But several options the PA is looking at would do just that.

The Port Authority owns a lot of under-used land in Hell's Kitchen. One of its options is to build a tempo-rary terminal on that land while they tear down the old Terminal, and build a new one on that site. But several of their proposed options use most of the current site for high-priced skyscraper development and build the new terminal partly on existing PA property and partly on blocks that are now filled with hundreds of homes and small businesses. Nonetheless, the Port Authority has continued its process despite our concerns and without community input.

Our local elected officials - U.S Rep. Jerry Nadler, Manhattan Borough President Gale Brewer, Senator Hoylman, Assembly Member Linda Rosenthal, Councilmember Corey Johnson and others - have held a press conference, written to the PA, testified at a PA board meeting, and published columns in newspapers. We are demanding the immediate termination of the PA's "Design + Deliverability Competition," until proper planning can be completed, all alternatives studied, and the Port Authority allows input that gives the pub-lic a voice in its future.

It is very clear: the only reason the Port Authority would need to destroy more of Hell's Kitchen is to let it use the current Bus Terminal land for lucrative de-velopment. I believe we must fight to stop that.

It is bad enough that the PA is a bi-state public au-thority that is largely exempt from New York State and City laws. It is using a "design competition" to justify destroying more of Hell's Kitchen. Holding a design competition before a comprehensive planning process puts the emphasis on form over function. 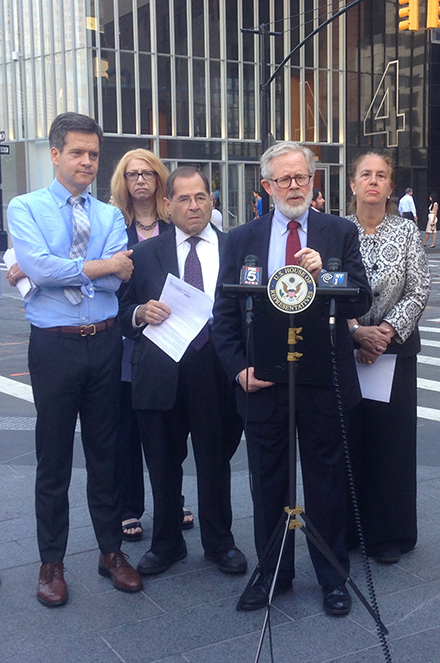 BUS TERMINAL BATTLE BUILDS: In July, I joined local elect-ed officials to demand greater community consultation by the Port Authority before it proceeds with its midtown bus termi-nal design competition.

There are vital public choices to be made. We must have an open public planning process that considers urban planning, environmental impact, and transportation issues. Only after sensible public policy decisions are settled should there be a "design competi-tion."

Together with our other local elected officials and community leaders, I have unequivocally opposed us-ing residential or commercial property for the project. We also criticized the lack of transparency and public engagement regarding the project's Master Plan and its Design Phase, about which neither Community Board 4, the elected officials who represent the community, the City of New York, or other stakeholders were con-sulted. Our letter also noted the lack of an environmental impact statement or air quality analysis, and that the Port Authority has not studied the project's relation to existing and future infrastructure assets, including the new Moynihan Station, the expanded Javits Center, the East Side Access Project, and the Lin-coln Tunnel, among others.

We wrote in our letter to the PA: "It would be a grave disservice, not only to our constituents, but to all the people of New York and New Jersey, to proceed with the Competition for a new PABT before a thorough and public examination is conducted of all of the outstanding issues and all of the available alternatives regarding a new bus terminal."

For the best results, there needs to be an open planning process that includes the information gleaned from previous studies commissioned by the PA, and meaningful input from the bus terminal's community and its local elected officials, its users, and the City, considering all the things the Port Authority says are its key objectives: improving safety and security, min-imizing traffic on local streets, meeting the needs of both commuter and long-distance bus travelers, and improving bus parking and staging while also meeting the needs of the neighboring community. Only then should there be a design competition.

I have long championed efforts to preserve New York's historic past. I strongly supported the law that created the New York City Landmarks Preservation Commission (LPC), the City agency charged with re-viewing and issuing rulings on landmarks and historic districts (see the article on the Upper West Side's Cen-tral Park West Historic District).

When property owners buy historic buildings, or seek to expand existing buildings in historic districts, they shouldn't be looking to modify them for grandios-ity; they should accept and embrace the responsibility that comes with owning a landmark building.

One such historic district in Chelsea is the LaMar-tine Place Historic District, which includes the Hopper Gibbons House at 339 West 29th Street, the only known Underground Railroad site in Manhattan. The House was frequented by famous abolitionists like Frederick Douglass and William Lloyd Garrison, and was nearly destroyed during the 1863 New York Draft Riots. A nine-year-long battle has been waged to force the building owner to remove an illegal fifth story -- a move that threatens the historic integrity of this link to New York's past. We have won important court victo-ries and rulings from the Buildings Department, and the next battle is at LPC on September 20, where it is due to make a decision. I encourage you to attend this public meeting. For more information, please contact my community office at 212-807-7900 or Gott-friedR@NYassembly.gov. 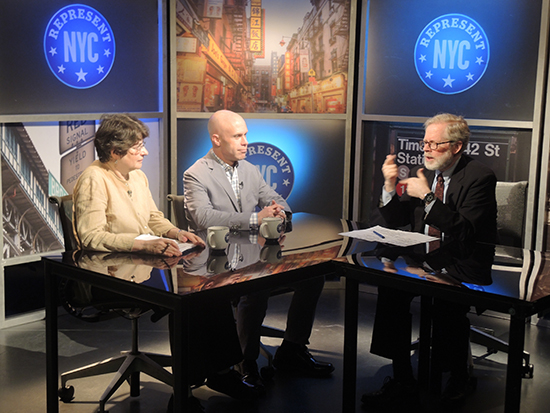 I spoke about the Hopper Gibbons House and other historic sites, as well as other issues involving historic preservation and landmarking, on "Represent NYC," a public affairs program that I host on the Manhattan Neighborhood Network. My guests were Fern Luskin of Friends of Hopper Gibbon House Underground Rail-road Site and Andrew Berman of the Greenwich Village Society for Historic Preservation. You can view it online at https://vimeo.com/173926705.

The BoltBus Company is proposing to locate two bus stops in Chelsea, one to discharge passengers on the west side of Seventh Avenue between 26th and 27th Streets, and a second to pick up passengers on the southeast corner of Eighth Avenue (between 27th and 28th Streets, across from the Penn South housing com-plex). It is a terrible idea, and State Senator Brad Hoylman, City Councilmember Corey Johnson, and I delivered a joint statement to Community Board 5 to express our strong opposition.

The City has documented serious vehicular traffic congestion in the area. Both Seventh and Eighth Ave-nues are major arteries and serve as gateways to Penn Station. Eighth Avenue is also a major artery for Lin-coln Tunnel traffic, Port Authority Bus terminal traffic, and in the future, will serve as a major drop off point for the new Moynihan Station. Neighbors report emergency vehicles blocked in traffic now, which is unacceptable. Eighth Avenue has been identified as one of the most dangerous corridors in the Vision Zero pedestrian plans.

As we wrote in our statement to Community Board 5, "the proposed bus stops will increase the taxi traffic on the avenues and the side streets, in addition to the buses themselves. It would be counterproductive to bring so many more vehicles and risk an increase in pedestrian 'conflicts.' This additional traffic will also impact the quality of air in a neighborhood that is already forced to breathe fumes from all the vehicles that are clogging our streets."

I will continue to fight this ill-conceived proposal in the coming months.

Night Out Against Crime in Manhattan

On the first Tuesday in August, communities around the country celebrate the "National Night Out Against Crime." 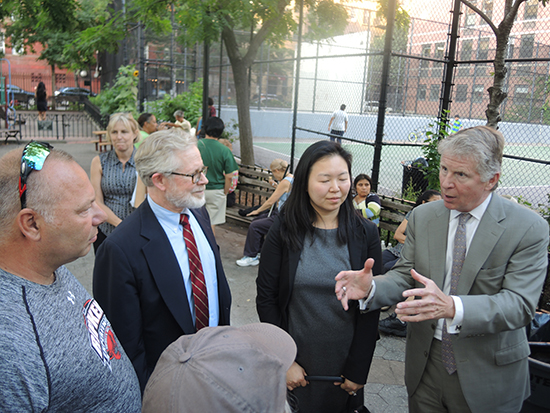 NIGHT OUT AGAINST CRIME: I joined Hell's Kitchen residents at the Night Out Against Crime event in August. At left is Larry Roberts, President of the Midtown North Precinct Community Council, and on the right is Manhattan District Attorney Cyrus Vance, Jr.

I mingled with members of the local community and NYPD officers, and greeted the precincts' new commanding officers, Captain Paul E. Lanot of the 10th Precinct and Inspector Peter J. Venice of Midtown North. I also enjoyed the opportunity to catch up with Manhattan District Attorney Cyrus Vance, Jr. in Hell's Kitchen Park, where we spoke with midtown residents about crime and quality of life issues.