Helping Chelsea Residents and Small Businesses Recover from the Attack

In the aftermath of the explosion in Chelsea on September 17th, I joined Mayor de Blasio and other elected officials in visiting Selis Manor on West 23rd Street, a residential building that houses about 200 visually impaired and physically disabled tenants, their families, and their service dogs. We all stopped in at the Malibu Diner to thank them for delivering food to Selis Manor in the aftermath of the bombing. Afterward, Manhattan Borough President Gale Brewer, Senator Brad Hoylman, Council Member Corey Johnson, and I thanked NYPD officers and FDNY emergency medical staff for doing an extraordinarily outstanding job in keeping New York safe.

The rapid and well-organized response by the City was enormously helpful and reassuring to Chelsea and the whole city.

I also met with small business owners on West 23rd Street whose livelihoods have been negatively affected by the attack. Afterward, I joined Governor Andrew Cuomo, State Senator Brad Hoylman, and Council Member Corey Johnson outside the King David Gallery to announce that New York State loans and other resources are being made available to small businesses affected by the attack in Chelsea. 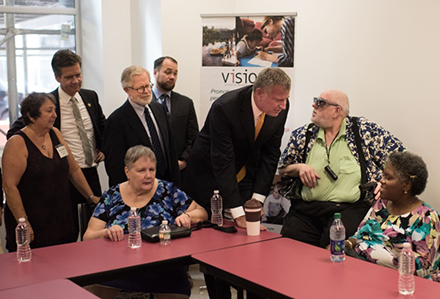 As we all know, the Port Authority Bus Terminal (PABT) on Eighth Avenue is in bad shape and inadequate. The PA plans to replace it. There are important planning and transportation decisions to be made, but the PA had been charging ahead without a reasonable process for making those decisions.

We've won an important victory: the PA has agreed to re-start its planning process to include the Hell's Kitchen community and its elected officials, the City, and other stakeholders in the planning process.

I'm fighting - along with our other local elected officials and community leaders - to make sure that does not include tearing down any of Hell's Kitchen's housing, businesses, a church and historic buildings, whether by eminent domain or otherwise. We've lost too many affordable homes and businesses in Hell's Kitchen in recent years.

Last month, after a vigorous campaign led by the local elected officials and community leaders, the Port Authority agreed to re-start the process and begin working more closely in consultation with the Hell's Kitchen community before choosing a final design for the new PABT. This is a major victory that will help ensure an open public planning process that considers urban planning, environmental impact, and transportation issues. Only after sensible public policy decisions are settled should there be a final design chosen, and September's agreement helps pave the way. 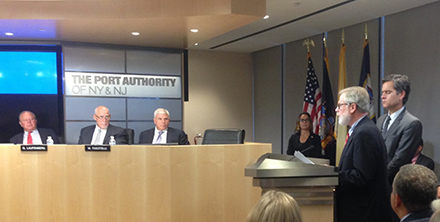 BUS TERMINAL: In September, I commended the Port Authority board for agreeing to work with the community and avoid tearing down Hell's Kitchen homes and businesses as it prepares to build a new bus terminal on the West Side. I spoke on behalf of all the local elected officials and was joined by State Sen. Brad Hoylman.

In September, we achieved a major advance in the long fight to preserve the Hopper Gibbons House at 339 West 29th Street, Manhattan's only documented Underground Railroad site.

At the New York City Landmarks Preservation Commission (LPC) hearing in September, commissioners expressed their support for removing the illegal fifth-floor addition that threatens the architectural and historic significance of Hopper Gibbons House, which is part of Chelsea's LaMartine Place Historic District. Although no official vote was taken by the LPC, the strong opinions expressed by its members indicate that we have a good chance at winning when the LPC does formally vote.

This has been a decade-long fight, with the persistent advocacy of the Friends of Hopper Gibbons Underground Railroad Site, the New York City Historic Districts Council, Save Chelsea, the Council of Chelsea Block Associations and many other preservationists and Chelsea residents, as well as elected officials representing the area, including Public Advocate Tish James, Manhattan Borough President Gale Brewer, Congressman Jerry Nadler, State Senator Brad Hoylman, Council Member Corey Johnson, and others. 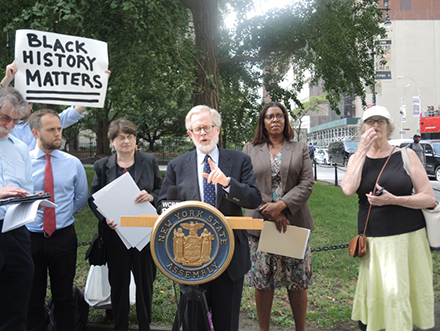 PRESERVING NYC HISTORY: Before testifying at the Landmarks Preservation Commission last month to urge it to preserve the historic and architectural integrity of the Hopper Gibbons House, I held a news conference with NYC Public Advocate Tish James, members of Save Chelsea, Friends of Hopper Gibbons Underground Railroad Site, and others to talk about the site's significance in NYC history.

Check Out the Farmers Market Every Wednesday at P.S. 11

I had a great time in September at the P.S. 11 Farmers Market outside 320 W. 21st Street. The Market is run by P.S. 11 students -- and their sales pitches are very persuasive!

It operates Wednesday mornings from 8 am to 10 am from mid-June through late November, offering fresh, healthy produce from Stoneledge Farm, a 90-acre certified organic farm in the Catskills, at below or market prices. It's a great program that teaches children and their families about healthy foods, the importance of supporting local farms, practical arithmetic and dealing with adults!

In September, I testified at Community Board 7's full board meeting to express my opposition to a zoning variance applied for by Congregation Shearith Israel on West 70th Street at Central Park West in the Central Park West Historic District. The Community Board passed a motion to disapprove the application without prejudice, pending submission of further materials and documents from Shearith Israel, which it must provide before the New York City Board of Standards and Appeals (BSA) hearing on the application on Friday, October 14th.

The synagogue wants to put up a nine-story building, including five top floors of luxury-priced condominiums. Its application to the NYC Board of Standards and Appeals (BSA) in 2008 was approved, although it had been rejected by CB7. After CSI made significant revisions to its plans, the BSA wrote to the Congregation's attorneys requiring them to answer a list of 40 questions regarding the application that it needed to address before a BSA hearing could be scheduled on the revised plan. The proposed building would reach an overall height of more than 119 feet, instead of the 75 feet allowed for most of the site under current zoning. In fact, it would be the tallest mid-block building in an "R8B" contextual zoning district since New York City created this classification.

The proposed building is too tall and out of character with the architecturally and historically significant buildings that line the side streets of the Central Park West Historic District in the immediate vicinity of the synagogue. It would continue the dangerous trend of developers and property owners pushing high-priced development beyond the City's zoning and historic preservation rules.

While Shearith Israel has revised its plans several times, the underlying issues that make the plan so troubling have not changed. It should be rejected by the BSA on October 14th. I will be submitting testimony urging rejection. If you would like to submit written testimony to the BSA on the Shearith Israel application for a variance, please refer to Case #74-07-BZ, 6-10 West 70th Street in Manhattan in your statement and mail it to: NYC Board of Standards and Appeals, 250 Broadway, 29th Floor, New York, NY 10007. Please send me a copy.