New Yorkers to Airbnb: "New York Is Not For Sale!"

In October, Governor Cuomo signed into law a bill that imposes fines on tenants or apartment owners who solicit or advertise an apartment as an illegal hotel.

The Illegal Hotel Law I got enacted in 2010 makes it clear that renting out a residential apartment for short-term transient is against the law. It's been a growing problem for tenants for several years. It means someone is giving the key to the front door of your building to a complete stranger. Building residents are harassed and inconvenienced by strangers coming and going at all hours and treating the building as if it were a tourist hotel. Illegal hotels are not subject to the strict fire and safety code protections of real hotels. It takes thousands of apartments off the market, worsening the City's housing shortage. This is not "sharing"!

But the law is hard to enforce, because the violations all happen behind closed doors. That's why the new law, sponsored by Assembly Member Linda Rosenthal and Senator Liz Krueger, to impose fines for soliciting and advertising, is so important. Those violations almost always happen in public, so enforcement should be much easier.

One of the biggest promoters of illegal hotels - Airbnb - won't stop posting illegal arrangements. So we really need tougher enforcement.

This isn't a free speech issue - there's no free speech right to solicit for a specific criminal act.

Airbnb's ads focus on people who rent out a room in their apartment while the tenant is present. But that's not illegal under the Illegal Hotel Law (although it probably violates the tenant's lease and could be grounds for eviction), and the advertising bill only relates to renting that is illegal. The Illegal Hotel Law also does not apply to buildings that are not a multiple dwellings, like one or two family homes, although local zoning might not allow hotel use.

Airbnb needs to care about its members and let them know that they are in danger of being evicted for violating their lease. Airbnb has known when members (including the elderly) were evicted by their landlord or fined by the City. And rather than encourage its members to abide by the law and not post illegal rentals, Airbnb immediately filed suit to challenge the new law.

On November 1, I joined legislators, affordable housing activists, and tenants at a City Hall press conference and rally in support of the legislation.

We're going to keep fighting to protect New York's affordable housing and make unscrupulous operators obey the law. Our message to Airbnb and others who would break the law is simple: New York is not for sale!

The 11th Annual West Side Tenants' Conference will take place at Fordham University Law School's Lincoln Center Campus at 150 West 62nd Street (off Columbus Avenue) on Saturday, November 19 from 9:30 am to 4:30 pm.

The Conference, hosted by Housing Conservation Coordinators, will feature workshops and panel discussions on affordable housing; housing and benefits for seniors; immigration and housing; problems caused by Airbnb and illegal hotels; public housing; predator lending; and landlord harassment. State Senator Brad Hoylman and I will lead a panel on the Port Authority's redevelopment plans in Hell's Kitchen that will begin at 2:30 pm.

To RSVP for the free event, which includes a free breakfast, coffee, and lunch, please call 212-716-1664 or email LHanrahan@hcc-nyc.org.

In October, the Clinton Housing Development Company (CHDC) unveiled its plans to create 280 new affordable housing units at City-owned sites in Hell's Kitchen and Chelsea, with all of the units projected to be ready by 2020.

Most of the units will be made available through the City's Housing Connect lottery system, although some will be reserved for seniors, performance artists, and homeless New Yorkers. The projects are being undertaken by CHDC as part of a $210 million redevelopment project.

The CHDC projects will also include new space for community gardens, the performing arts, neighborhood organizations, and community centers.

In October, I was privileged to be honored by the Friends of Hudson River Park at its annual benefit gala along with actor Matthew Broderick and Paula Madoff of Goldman Sachs.

One of the things I'm proudest of in my work in the Legislature is having been the Assembly sponsor of the 1998 Hudson River Park Act, which I co-authored with former State Senator Franz Leichter. It helped realize the dream of building a park on Manhattan's Hudson River waterfront. It is one of those rare things in government when the result is even greater than anyone hoped at the time. Getting the legislation done took years of effort. Now the Park is a special amenity for New Yorkers and visitors to our city alike, creating a beautiful recreational space along the Hudson River waterfront in a densely populated urban area where there is far too little access to our waterfront.

The Friends of Hudson River Park does extraordinary work raising money and community support for the Park.

Attendees at the event mingled with prominent New Yorkers like Sara Jessica Parker and Martha Stewart and were entertained by emcee Harry Connick, Jr. and singer CeeLo Green. 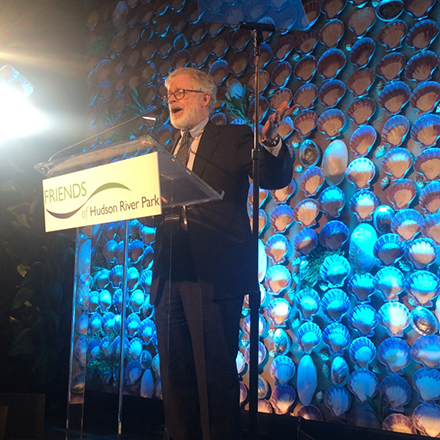 HUDSON RIVER PARK AWARD: I was humbled to be honored by the Friends of Hudson River Park at its annual gala.

Congregation Shearith Israel is seeking a variance from the NYC Board of Standards & Appeals (BSA) in order to place five floors of high-priced condominiums atop a new building at West 70th Street off Central Park West, in the Upper West Side/Central Park West Historic District. Without a variance, the new building - which would be the tallest midblock building ever erected in an R8B zoning district, and more than double the height of neighboring brownstones on West 70th Street - would not be allowed in the Historic District.

On October 14, I testified on behalf of State Senator Brad Hoylman and myself at the BSA hearing expressing our opposition to the variance application. We argued that "the proposed building is too tall and out of character with the architecturally and historically significant buildings that line the side streets of the Upper West Side/Central Park West Historic District" and would "accelerate the dangerous trend of developers and property owners pushing high-priced luxury development to the detriment of the spirit and the letter of the City's zoning and historic preservation laws." (See attached statement.)

The variance is also opposed by Manhattan Community Board 7 and by community and preservationist organizations, including Landmark West. The BSA is expected to make its decision in January. 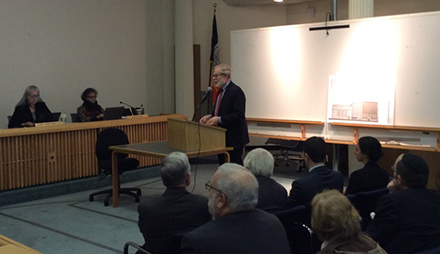 PROTECTING THE CENTRAL PARK WEST HISTORIC DISTRICT: I testified at the Board of Standards & Appeals against a variance application allowing excessive height for high-priced condos to circumvent the law on development in historic districts.

Save Time on Election Day by Following These Simple Steps

There are a few simple steps voters can take before voting on November 8 to save time and avoid unnecessary wait times on long lines at polling places.

Before going to vote, you can go online to nyc.pollsitelocator.com, enter your address, and write down your poll site address, and the number of your Assembly District (AD) and Election District (ED).

To avoid slow computer response times on Election Day itself, you should go to the website at nyc.pollsitelocator.com before November 8 to find out your AD and ED.

Voting early in the day - on your way to work, or later in the morning - usually means shorter lines. And you won't have to worry about being too busy or forgetting later in the day.