Starting in January 2019, the state Metropolitan Transportation Authority will be rebuilding the 14th Street L subway line's "Canarsie tunnel" under the East River, which suffered severe damage during Superstorm Sandy in 2012. The project will take at least 18 months, during which there will be no subway service on the L line, which carries about 400,000 riders every day. In addition to the effect on people who ride the L line to and from our community, it will have a major impact on above-ground vehicle and pedestrian traffic as people use other ways to travel.

I have joined with other elected officials representing neighborhoods affected by the L train shutdown to urge the MTA and the NYC Dept. of Transportation to study ways of improving alternative crosstown travel options along 14th Street. We wrote to MTA President Thomas Prendergast and NYCDOT Commissioner Polly Trottenberg urging their agencies to consider reserving lanes of 14th Street to speed the flow of MTA buses on 14th Street and have been following up during briefings by the agencies.

We also emphasized considering the needs of seniors and persons with permanent or temporary disabilities, including Access-A-Ride users; affect local businesses and on streets running parallel to 14th St. and those that begin or terminate at 14th Street.

Helping Those in Need

Near the end of every year, we look forward to the winter holidays, to spending time with our loved ones and reflecting on everything for which we are grateful. It's also the time of year to think about the many New Yorkers who are struggling, including those facing food insecurity - not knowing where their next meal will come from or simply not having enough food to meet the nutritional needs of each family member.

Let's keep this in mind during the holiday season and think about how we can help the less fortunate. Federal and local hunger prevention programs and food banks help provide meals to millions of vulnerable individuals and families.

If you'd like to help by making a financial contribution, donating food, or volunteering, you can contact the Food Bank for New York City at (212) 566-7855 or http://www.foodbanknyc.org/. To donate food or water to a local food pantry or soup kitchen, you can use the Food Bank's website to learn how to contact an organization near you.

New Yorkers to Airbnb: "New York Is Not for Sale!"

In October, Governor Cuomo signed into law a bill that was sponsored by Assembly Member Linda Rosenthal and Senator Liz Krueger that imposes fines on tenants or apartment owners who solicit or advertise an apartment to be used as an illegal hotel.

To enforce this new law, the City must implement new rules so that it can issue violations based on the new law. The Mayor's Office of Special Enforcement has proposed rules which must have a public hearing before they can be put in place. The hearing will be at 11 a.m. on Dec. 19, at 22 Reade St; in Lower Manhattan.

The Illegal Hotel Law Senator Krueger and I got enacted in 2010 makes it clear that renting out a residential apartment for short-term is against the law. The law only pertains to apartments in buildings with six or more apartments and does not apply to owners of single-family and two-family homes, or residents who rent out individual rooms in their homes for less than 30 days (as long as they are also there the entire time and their lease permits it.)

Illegal Hotels have been a growing problem for tenants for years. It means a stranger has the key to the front door of your building; strangers coming and going at all hours and treating the building as if it were a tourist hotel. Illegal hotels are not subject to the strict fire and safety code protections of real hotels and take thousands of apartments off the market, worsening the City's housing shortage.

Airbnb needs to care about its members and let them know that they are in danger of being evicted for violating their lease. Airbnb has known when members (including the elderly) were evicted by their landlord or fined by the City. It should encourage its members to abide by the law. 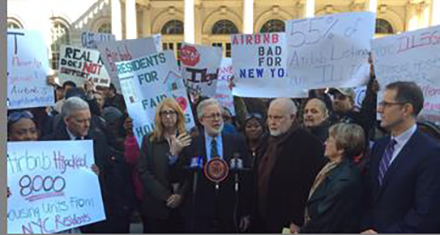 Many New Yorkers have expressed their disappointment that once again, the presidential candidate receiving the most votes failed to gain a majority in the Electoral College. I count myself among them, and think it's high time that the system of electing a President and Vice-President be reformed so that voters' will is not repeatedly thwarted by the Electoral College in future elections.

A national popular vote would be a far better system for the presidential election than the dysfunctional Electoral College. In 2014, New York joined the National Popular Vote Interstate Compact (NPVIC) with bipartisan support. This means New York State's Electoral College votes will go to the candidate who receives a nationwide majority of the popular vote, if states representing a majority of the Electoral College enact the same law. Governor Cuomo recently signed into law a bill that I was a co-sponsor of, which makes New York's commitment permanent.

The NPVIC would create a national popular vote system even without an amendment to the U.S. constitution. Ten other states and the District of Columbia have already passed laws joining the compact.

The Metropolitan Transportation Authority (MTA) is seeking to construct an emergency ventilation plant (EVP) for the 4/5/6 subway lines below the street bed of Park Avenue between the E. 33rd Street and Grand Central stations. According to the agency, construction would take place in the northbound lanes of Park Avenue, either between E. 36th and E. 38th Streets or between E. 37th and E. 39th Streets, in the Murray Hill Historic District.

Murray Hill residents have been plagued by traffic and noise from various construction projects, in particular, the massive East Side Access project, for many years. Many question whether the EVP, and the inevitable disruption to their neighborhood's quality of life that its construction will cause, are truly necessary, and if the EVP can't be built in a way that causes less traffic and less noise and air pollution. The MTA argues that the EVP is necessary for passengers' safety because the nine-block stretch between the 33rd Street and Grand Central stations is the longest unventilated section of any subway line in Manhattan, one of the longest unventilated segments of the entire subway system, and on the most crowded subway line in the nation.

Every year, the Citizens Committee for New York City awards grants of up to $3,000 to community-based organizations seeking to improve the local quality of life.

Neighborhood organizations, public housing tenant associations, and groups working to improve public schools, are just some of the winners of past grants. The application deadline for grant applications is January 23, 2017.

For a grant application or to obtain more information, please contact Imani by phone at (212) 822-9567 or by email at ibrown@citizensnyc.org. Applications can also be found online by going online to http://www.citizensnyc.org/grants/neighborhood-grants