Last year, the MTA announced that it would proceed with construction of an emergency ventilation plant (EVP) for the 4/5/6 subway lines below the street bed of Park Avenue between the E. 33rd Street and Grand Central stations. According to the agency, construction would take place in the northbound lanes of Park Avenue, either between E. 36th and E. 38th Streets or between E. 37th and E. 39th Streets, in the Murray Hill Historic District.

At the beginning of March, however, the MTA informed my office that it is removing the EVP from its current 5-year capital plan, citing budgetary constraints. Agency officials indicate that the EVP will likely be included in its 2020-2024 capital plan, however, and is continuing to pursue the public environmental review process in connection with the project.

Because the proposed EVP may have a significant impact on the environment, the MTA is required to issue a Final Scoping Document and, subsequently, a Draft Environmental Impact Statement (DEIS). The Final Scoping Document was issued in February, and is available for viewing by members of the public at the following locations in Manhattan:

Murray Hill has been plagued by traffic and noise from various construction projects, in particular, the massive East Side Access project, for many years. Many community residents questioned whether the EVP, and the inevitable disruption to the neighborhood's quality of life that its construction would cause, are truly necessary, and if the EVP couldn't be built in a way that causes less traffic and less noise and air pollution. The MTA argues that the EVP is necessary for passengers' safety because the nine-block stretch between the 33rd Street and Grand Central stations is the longest unventilated section of any subway line in Manhattan, one of the longest unventilated segments of the entire subway system, and on what is still - even after the opening of the Second Avenue Subway - the most crowded subway line in the nation.

Members of the public will have an opportunity to comment on the proposal at a public hearing once the MTA releases a Draft Environmental Impact Statement (DEIS), expected later this year. My office welcomes comments from constituents on the Final Scoping Document and, once it is issued, the DEIS.

The New York Health Act (A. 4738) is a state single-payer health care bill that I sponsor. It would establish universal, complete health cover-age for every New Yorker. In February, it was reported by the Assembly Committee on Health, which I chair.

The New York Health Act would save tens of billions currently spent on insurance company administration and profit, and the administrative costs doctors and hospitals spend for dealing with insurance companies, and remove the costly barriers to care. One in three families with private insurance has to put off necessary medical care for financial reasons. The New York Health Act would end the regressive "tax" we pay -premiums, deductibles, co-pays, and out-of-network charges - that have no relation to ability to pay. Instead, it would be funded by a broad-based progressive tax based on ability to pay. The Assembly has passed the bill the past two years.

On March 4, State Senator Liz Krueger hosted a town hall meeting at a packed auditorium in the CUNY Graduate Center on "Fighting For Your Health." I joined Elisabeth Benjamin of the Community Service Society and Elizabeth Adams of Planned Parenthood in a panel discussion on topics like the NY Health Act, the so-far still secret Majority plan to dismantle the Affordable Care Act and the effect on New Yorkers, and women's health.

HEALTH CARE FOR ALL: On March 4, I co-hosted a packed town hall meeting with Sen. Liz Krueger at the CUNY Graduate Center where we discussed the New York Health Act, which would establish publicly funded single-payer universal health coverage.

Organizers are providing those pre-registering with training materials and assignments to a team for the lobby day meetings, as well as "Thank You Brigades" to acknowledge the legislators who have sponsored New York Health and taken a stand for healthcare for all. If you'd like to get more information, please email info@pnhpnymetro.org or call 212-580-2554.

Standing Up for the Transgender Community

In February, the Trump administration announced that it was moving to rescind protections for transgender public school students that had allowed them to use bathrooms corresponding with their gender identity, reversing an Obama administration policy that reinforced several court rulings. Governor Cuomo has already announced that New York State's policy prohibiting discrimination based on gender identity or expression --- which allows students to use bathrooms that correspond with their gender identity -- will remain unchanged. Like millions of New Yorkers, I was outraged at the Trump administration's discriminatory and mean-spirited rollback of the rights of transgender students. I joined thousands at a rally and protest at the Stonewall National Monument on February 23rd, where I spoke out against Trump's move.

I am the Assembly sponsor of GENDA, the Gender Expression Non-Discrimination Act that would legally bar discrimination in New York against any persons on account of their gender identity or expression. Although many protections for transgender persons in New York have been created by agency regulations, we need to protect the transgender community in State law. 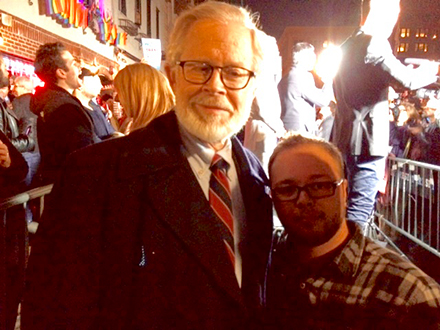 TELLING TRUMP JUST WHERE TO GO: I spoke at a rally out-side the Stonewall Monument to protest the Trump administration's rollback of protections for transgender students. I was introduced to the crowd by Bryan John Ellicott, a transgender activist.

Home care enables people to receive health care and personal services at home instead of in a nursing home or other facility. It is a labor-intensive field that is experiencing waiting lists for services across the state, at the same time that the need is increasing. Workers are chronically underpaid and there are reports of a growing shortage of home care services for the elderly, people with disabilities, and people who are chronically ill.

In February, I co-chaired Assembly hearings on the opportunities and working conditions for New York's home care workforce in Manhattan and Albany. The hearings were held jointly by the Assembly Committees on Health (which I chair), Aging, and Labor and the Assembly Task Force on People with Disabilities.

Witnesses included patients and family members, patient advocates, home care workers, provider agencies, and representatives of long-term care Medicaid managed care plans. They all spoke about obstacles to recruiting, employing, and retaining a sufficient workforce, and the health, financial and social damage done by the unavailability of home care. This is mainly caused by low wages that result from inadequate Medicaid payment rates.

I am working to ensure that the Assembly's budget proposal requires the State pays adequate rates to Medicaid managed care plans that enroll these patients and ensuring that this funding is passed through from the plan to the home care agency and then to the workers.

Take Advantage of Tax Credits Before Filing Your Return

Federal, State, and City governments offer several tax credits that can help lower your taxes or increase the size of your return. Here are some that can save New Yorkers money:

The Earned Income Tax Credit (EITC) helps workers earning a low or moderate income reduce their taxes and may result in a refund. To qualify for the New York State and federal EITC, you must:

To be eligible for the New York City EITC, you must also be a full- or part-year resident of New York City, claim the federal Earned Income Tax Credit, and file a New York State income tax return (even if you do not owe any tax).

VITA provides IRS-certified volunteers to help individuals and families with annual incomes of $54,000 or less, people with disabilities, the elderly, and those with limited English skills. For those 60 years of age and older, the Tax Counseling for the Elderly (TCE) program can also help, at no cost to you. To find the nearest VITA or TCE site, call 800-906-9887 or visit irs.gov/Individuals/Free-Tax-Return-Preparation-for-You-by-Volunteers.

Community Tax Aid (CTA), an independent, non-profit, all-volunteer organization, provides free tax preparation assistance to individual New York City residents with an annual income of $25,000 or less, and to families in New York City with a total household annual income of $55,000 or less (provided no more than $3,400 of income is from interest, dividends, and capital gains).

The office of New York State Attorney General (AG) Eric Schneiderman issued an immigration fraud alert due to an increased number of reports that scammers are posing as Immigration and Customs Enforcement (ICE) agents and demanding money from immigrants in order to avoid deportation.

Visit https://ag.ny.gov/SpeedTest to learn how to test your speed and submit your results.