On May 16, the New York State Assembly passed the New York Health Act, my bill which would establish a universal, "improved-Medicare-for-all" single-payer health plan, New York Health, which would cover every New York resident, regardless of wealth, income, age, or health status. The bill passed 94-46, more than a 2-to-1 margin. Senator Gustavo Rivera (D-Bronx) is the Senate sponsor. In the Senate, the bill has 31 co-sponsors - one short of a majority. For many New Yorkers, the rising cost of health care has forced individuals and families to go without health care because of cost. Under the New York Health Act, all residents would be enrolled in a universal health coverage system, with no deductibles or copays, and would have access to the full range of doctors and other health care providers - there would be no restricted provider network or out-of-network charges. Benefits would include comprehensive inpatient and outpatient care, primary and preventative care, prescription drugs, behavioral health services, laboratory testing, and rehabilitative care, as well as dental, vision, and hearing care. The publicly funded coverage would include no network restrictions, deductibles or co-pays. Funding would be by a broad-based, progressively-graduated tax based on ability to pay. A study prepared by Gerald Friedman, Chair of the Economics Department at the University of Massachusetts-Amherst, shows that under New York Health, 98% of New Yorkers would pay less than they spend on health care now. State funding would be combined with federal funds that are currently received for Medicare, Medicaid, and Child Health Plus to create the New York Health Trust Fund. These programs would be folded into New York Health. The New York Health Act has been endorsed by the NYS Academy of Family Physicians, the NYS American Academy of Pediatrics, the NYS Nurses Association, the Community Health Care Association of NYS, the Committee of Interns and Residents SEIU, Doctors Council SEIU, the NY chapter of Physicians for a National Health Program, the NYS AFL-CIO, SEIU 1199, NYSUT, UFT, 32BJ SEIU, Communications Workers of America, Amalgamated Transit Union Local 1056 and 1179, United Auto Workers 9 & 9A, Retail, Wholesale and Department Store Union (RWDSU), UFCW Local 1500, IATSE Local 1, Capital District Area Labor Federation, the Sullivan County Legislature, the Tompkins County Legislature, Citizen Action, the Community Service Society, NYPIRG, Housing Works, the Statewide Senior Action Council, the Federation of Protestant Welfare Agencies, the League of Women Voters, Make the Road NY, the NY Immigration Coalition, and many other important New York institutions. With the health care system rigged against working people and the Trump administration and ultra-conservatives in Washington fighting to make health care access even worse, New York can do better with an 'improved Medicare for all' single-payer system that covers all of us and is funded fairly. Support is growing with the public and in the State Senate, where we now have 31 co-sponsors (in a 63-member legislative body), including all the mainstream Democrats and members of the Independent Democratic Conference. Assembly passage is an important step as we continue to build support for universal health care in the face of the Trump agenda.

On May 23, the NYC Landmarks Preservation Commission (LPC) issued a ruling blocking the attempt to add a rooftop addition to the Hopper Gibbons House in Chelsea, New York City's only known stop on the Underground Railroad. Chelsea residents, preservationists, elected officials, and community leaders had been fighting for years to remove a fifth-floor addition to the historic building that was illegally constructed after the home was landmarked as part of the Lamartine Place Historic District. The roof was historically significant because the abolitionists that owned the home escaped over it to avoid an angry mob during the notorious Draft Riots of 1863. The LPC decision is gratifying to all the New Yorkers who fought long and hard to preserve this historic building. It wouldn't have been possible without the determined advocacy of countless preservationists, community activists, and supporters of organizations like Friends of the Hopper Gibbons Underground Railroad Site and Save Chelsea. 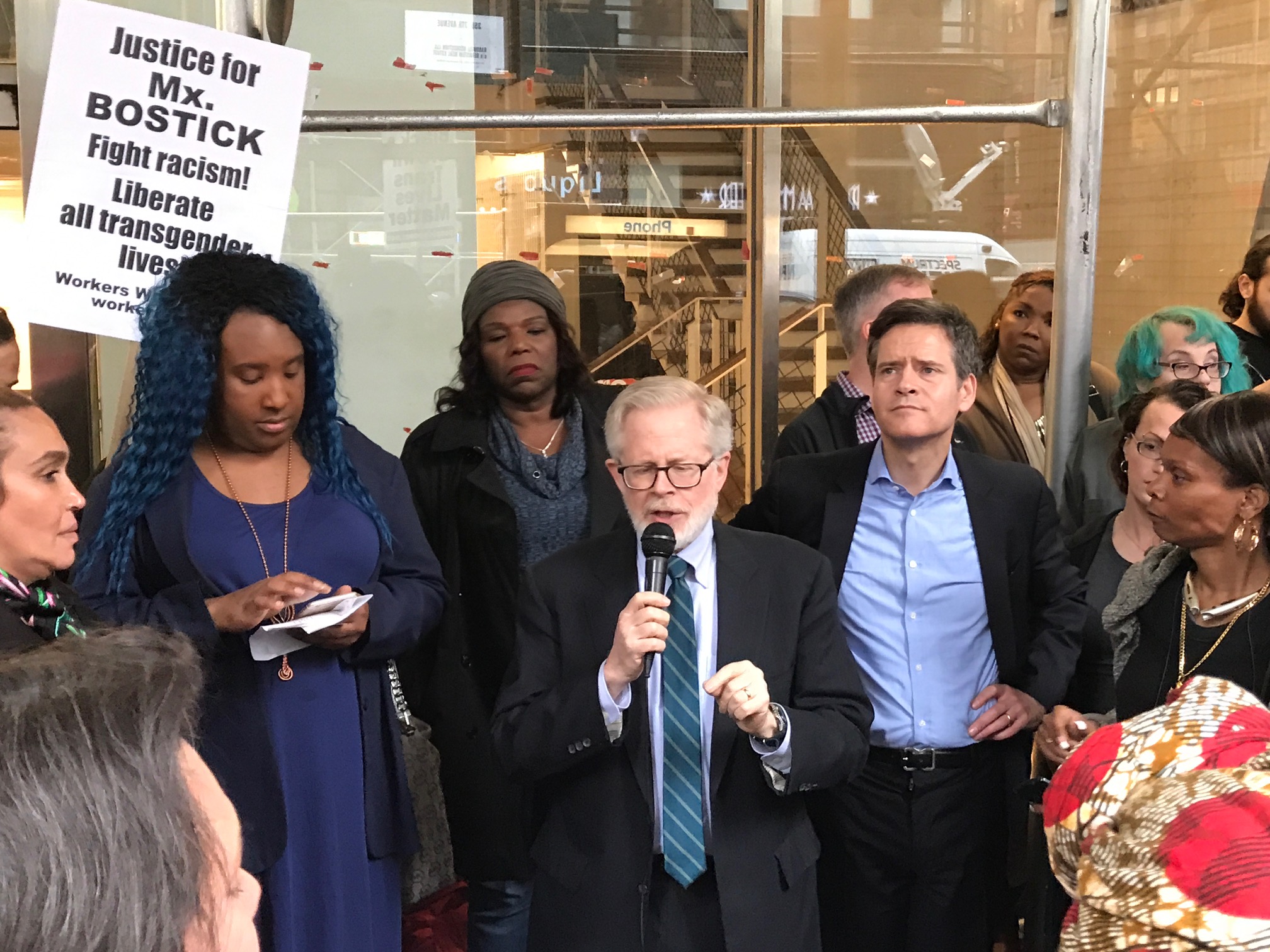 VIGIL FOR TRANSGENDER HOMICIDE VICTIM: I joined Senator Brad Hoylman and dozens of activists and supporters of transgender equality at a vigil for Kenneth Brenda Bostick.
Transgender Vigil in Chelsea
Following the murder in Chelsea of a transgender person, Kenneth Bostick (who also sometimes used the first name Brenda), I joined with hundreds of activists, supporters of transgender rights, and organizations like the New York City Anti-Violence Project, GMHC, SAGE, the Transgender Legal Defense Fund, and my colleague State Senator Brad Hoylman at a vigil on May 12 to mourn Bostick's murder and call for justice and equality for transgender New Yorkers. Bostick, a resident of the Bowery Residents Committee shelter for the homeless on West 25th Street, was brutally beaten on April 25 on 7th Avenue between 29th and 30th Streets, and later died of head injuries inflicted in the attack. A homeless man who apparently knew Bostick, Joseph Griffin, was later arrested and charged with homicide in the case. Whether or not the killing was a hate crime, Bostick would have been unlikely to have been in such a vulnerable position on the night of the killing if transgender persons were afforded the same opportunities for full participation in our society and our economy afforded those who conform more to societal "norms." The Bostick tragedy points to the need for greater inclusion and acceptance of transgender persons. The rising tide of violence against transgender persons is spurring a renewed effort to pass the Gender Identity Non-Discrimination Act, or GENDA, legislation that I sponsor and which has passed the Assembly 10 times, only to be denied a vote in the State Senate each time.

On Thursday, June 8, at 1:00 p.m., the New York State Department of Health and the Public Health and Health Planning Council of New York State are holding a public meeting on the proposed restructuring of Mount Sinai Beth Israel Hospital and the establishment of Mount Sinai's new Downtown Network. It will take place at 90 Church Street in Manhattan (between Barclay and Vesey Streets) in Hearing Room 4A on the fourth floor. In the next four years the Mount Sinai Health System will be constructing a new inpatient hospital at Second Avenue and 14th Street. Mount Sinai is also committing to provide approximately 220 beds throughout its Downtown network, a state-of-the-art emergency room at the new Beth Israel site, and the maintenance and expansion of behavioral and mental health services on the current Beth Israel campus near First Avenue and Fifteenth Street. Members of the public are encouraged to attend, listen to the presentations, and have an opportunity to have their questions answered. 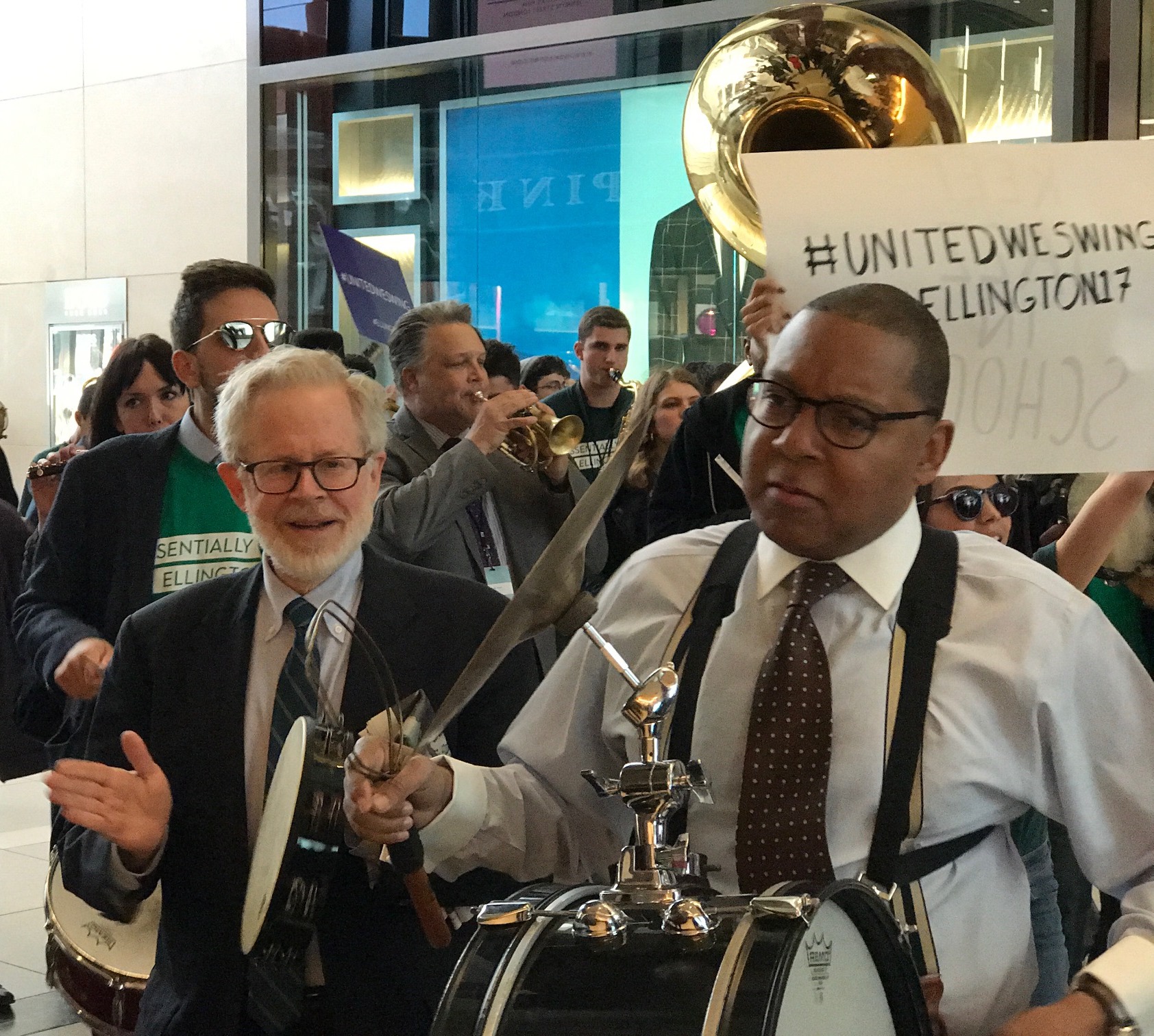 2UNITED WE SWING: I joined Wynton Marsalis and hundreds of high school jazz musicians at Jazz at Lincoln Center's "United We Swing" event to support government funding for music and art education in schools

On May 12, I joined hundreds of young musicians from across the country at a ceremonial march in Columbus Circle to kick off Jazz at Lincoln Center's 22nd Annual Essential Ellington High School Jazz Band Competition & Festival. Along with more than 300 high school jazz musicians, band directors, and parents - as well as Jazz at Lincoln Center's Managing and Artistic Director, the great Wynton Marsalis - I marched in a "Second Line" procession from Columbus Circle Park to Frederick P. Rose Hall for "United We Swing," a celebration and support of arts programs and arts education nationwide. Part of our aim was to showcase how unique arts education programs empower young artists to learn, create and play, amidst Donald Trump's proposal to cut federal arts funding and completely eliminate the National Endowment for the Arts in the federal budget. The event called for our government to preserve funding and other support for the arts.