Time to Apply for Health Coverage under the ACA; Open Enrollment Runs Until January 31

The new open enrollment period to apply for health coverage under the Affordable Care Act began in November. New Yorkers have until January 31, 2018 to sign up for health insurance through "NY State of Health," the State's official health plan "marketplace." (The federal deadline is December 15, 2017, but New York extended the deadline for NY State of Health.)

Enrollment in an ACA health plan that you choose can only be done during the annual open enrollment period, with limited exceptions. Most Marketplace consumers qualify for financial assistance to pay for coverage. New York also has our Essential Plan, which offers free or very low-cost coverage for lower income individuals and families. Eligible people can enroll in the Essential Plan at any time. As chair of the Assembly Health Committee, I led the legislative effort that created the Essential Plan.

Eligible New Yorkers can enroll in Medicaid, Child Health Plus and the Essential Plan through the Market-place all year.

For information on enrollment eligibility or to enroll in a health plan, visit www.nystateofhealth.ny.gov, or call the Customer Service Center at 855-355-5777 (TTY 800-662-1220). The website and the service center can connect you with organizations that can help you navigate the system.

Victory in Fight for Tax Relief for Manhattan's Small Businesses

On November 30, the New York City Council approved legislation that will lift the commercial rent tax (CRT) burden that harmed thousands of small businesses located in Manhattan below 96th Street. Mayor de Blasio also held a public event that day to announce that he would sign the bill into law which was introduced by Manhattan Councilmember Dan Garodnick. I had strongly supported the change.

The City CRT is imposed only from businesses in Manhattan between 96th Street and Chambers Street whose annual rent bill is $250,000 or more - a level that hadn't been adjusted since 2001. As many rents went up above that level over the years, the CRT applied to more and more businesses, making it difficult for many small businesses in Manhattan to survive. The CRT has been part of why neighborhood stores are be-ing replaced by chain stores and banks. 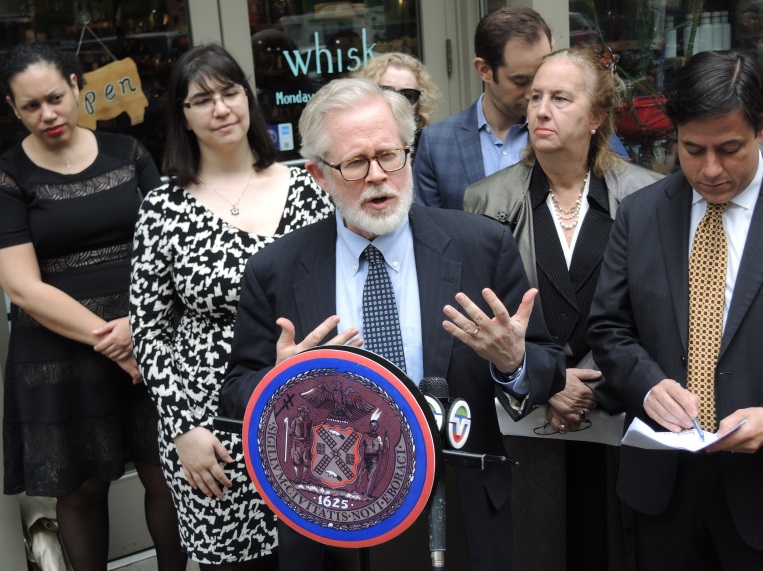 TAX RELIEF FOR MANHATTAN'S SMALL BUSINESSES: Earlier this year, I joined Councilmember Dan Garodnick, Manhattan Borough President Gale Brewer, and business and community leaders at a press conference in the Flatiron District to call for the elimination of the Commercial Rent Tax on thousands of small businesses in Manhattan, a struggle we finally won in November.

The new law will lift the annual rent level at which the CRT is triggered to $500,000 for almost all affected businesses. For businesses earning more than $5 million annually whose yearly rents are lower than $500,000, the tax will be phased in based on the store's revenue; if a business earns $10 million or more in annual revenue, it will still be required to pay the full tax.

While the legislation will eliminate the CRT for about 40% of all businesses currently affected, it will only reduce the revenue the City receives from the CRT by about 6 percent. Another City bill that I support, which was introduced jointly by Manhattan Council Member Corey Johnson and Manhattan Borough Presi-dent Gale Brewer, would eliminate the CRT altogether for any affordable supermarket currently affected by the CRT.

On Thursday evening, December 14, I am co-sponsoring a forum on Access-A-Ride service that was orga-nized by NYS Senator Liz Krueger. The forum, which is free and open to the public, will take place from 6:00 to 8:00 p.m. at Mount Sinai Downtown at 10 Union Square East (between 14th and 15th Streets) in the 2nd floor conference room.

The Access-A-Ride paratransit system, which is operated by the MTA, serves about 150,000 New Yorkers with disabilities who have little or no access to public transit. But Access-A-Ride has chronic delays, excessive trip times, and many other service problems.

At the forum, MTA officials will discuss the agency's effort to upgrade and improve Access-A-Ride. Also speaking will be will be representatives of the Center for Independence of the Disabled, NY (CIDNY), CIDNY Brooklyn, Mobilizing for Justice, New York Lawyers for the Public Interest, and AARRG! (the Access-A-Ride Reform Group), a new coalition of public interest organizations dedicated to advocating for New Yorkers with disabilities who use paratransit services. (AARRG! encourages users to take an online survey about the quality of Access-A-Ride service by going to: http://bit.ly/2zetgNI.)

Every day, New Yorkers wait for subway trains running far behind schedule, making us late for work, for school, and for doctor's appointments.

Virtually every subway line has worsened dramatically, with on-time performance far below every other major city. The monthly average of subway delays is about triple the rate in 2012. In September 2017, there were more than 58,000 weekday subway delays. Transit experts agree that delays are mainly caused by aging signal systems and train cars, equipment that will cost billions of dollars to replace after decades of neglect.

Two new grass-roots initiatives can help amplify the voices of frustrated straphangers. I am supporting both efforts.

The second initiative, SignalFail.com, was inspired by New York City Council Majority Leader Brad Lander. Unfortunately, the subway "rescue plan" developed by the MTA does not include any additional funding for signal modernization. Even worse, as the Times revealed, the MTA has cut half-a-billion dollars from signal projects just in the last several years.

SignalFail.com was launched to focus a public spotlight on the need to modernize the MTA's signal system. Please check it out to learn more about how signal failures are harming New Yorkers and what we can do to modernize our signal system, and sign the petition calling on the MTA to fix the signals. 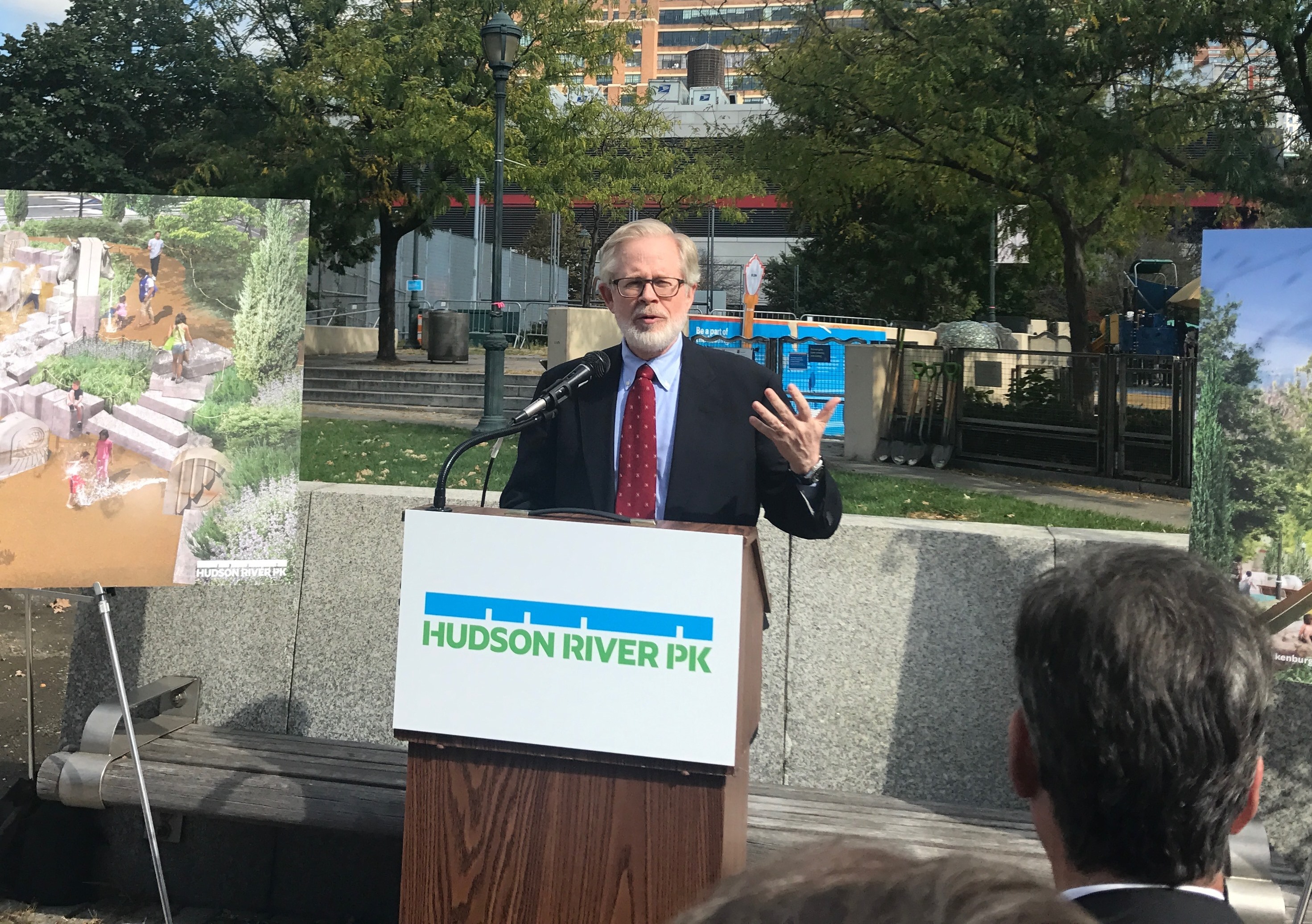 DOWN BY THE WATERSIDE: In October, I spoke at the groundbreaking ceremony unveiling new landscaping at Chelsea Wa-terside Park.

Earlier this year the New York State Office for the Aging (SOFA) announced that it was planning to cut funding for the Penn South Social Services Program for Seniors (PSSS). This would have been a disaster. I worked with other local elected officials, including State Senator Brad Hoylman, Manhattan Borough Presi-dent Gale Brewer, and Councilmember Corey Johnson, to convince SOFA to reverse its ill-considered decision.

We won. SOFA is now restoring the State grant to the PSSS. The funding, which comprised about one-fifth of PSSS' total budget, will help elderly Penn South residents remain connected to the community and their neighbors, and help keep them in their longtime homes at Penn South, the nation's first officially recognized Naturally Occurring Retirement Community, or NORC.

The New York City Department of Youth and Community Development (DYCD) is now receiving application for the "Ladders for Leaders" summer program for high school and college students.

DYCD's Ladders for Leaders program offers high school and college students the opportunity to partici-pate in paid professional summer internships with leading corporations, non-profit organizations and gov-ernment agencies in New York City. Students will get the opportunity to explore their interests and discover new ones through:

Applications are evaluated based on academic performance, response to an essay question and résumé. To apply, please go online to http://www1.nyc.gov/site/dycd/services/jobs-internships/nyc-ladders-for-leaders.page, or call Youth Connect at 1-800-246-4646 to learn more.

On November 20, I chaired a joint hearing of the Assembly Health and Aging Committees on problems in the quality of care, patient safety, and oversight and enforcement of laws and regulations in nursing homes in New York State. We heard testimony on several aspects of nursing home care, including: the effectiveness of new federal regulations and changes that are needed to ensure nursing home residents receive quality care: improving inspection and enforcement; setting staff-to-resident ratios; improving staff training; reporting and address-ing patient complaints; and strengthening the long-term care ombudsman programs. 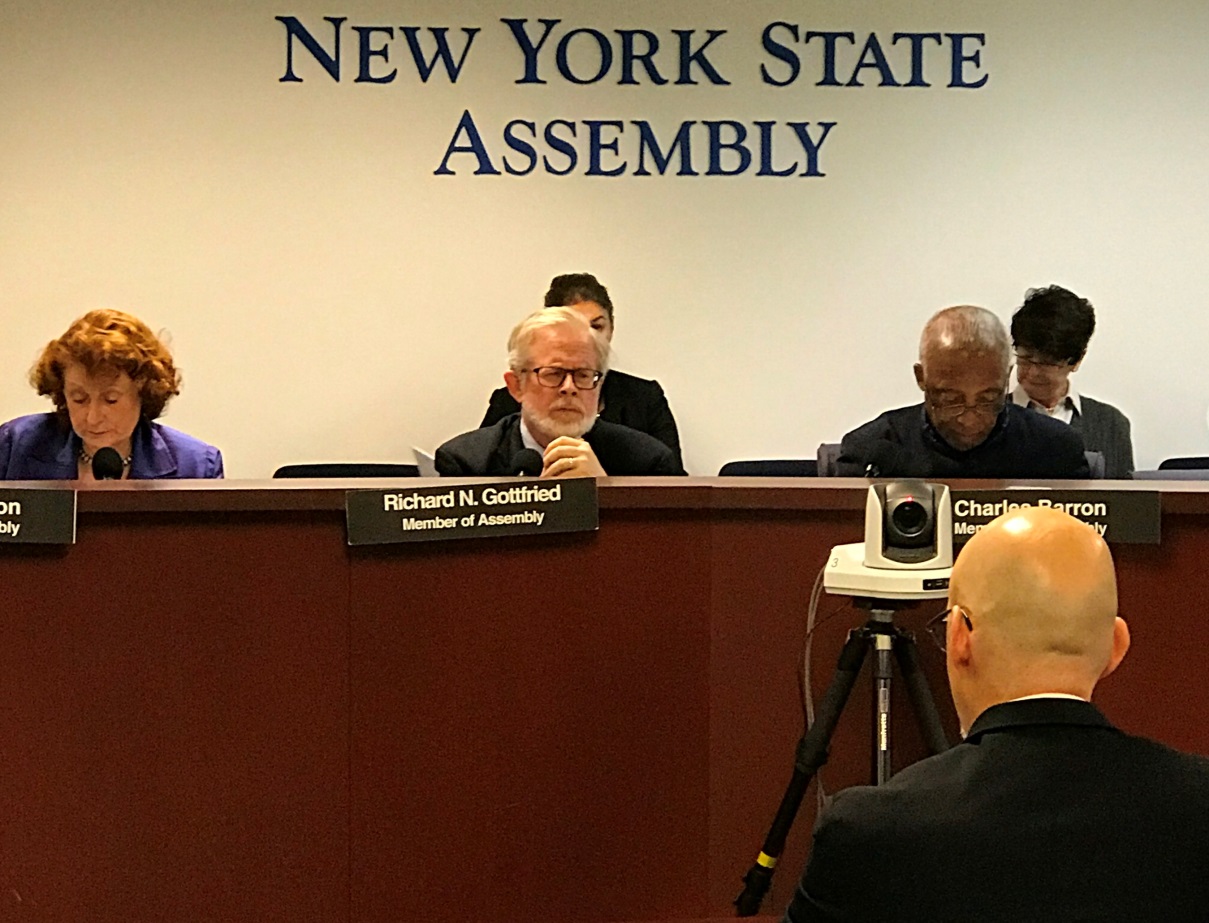 HEARING ON NURSING HOME CARE: In November, I co-chaired a hearing on the quality of nursing home care in New York State.

On Veterans Day, Governor Cuomo signed into law a bill I sponsored in the Assembly (A. 7006, sponsored by Senator Diane Savino in the Senate as S. 5629) that adds Post Traumatic Stress Disorder (PTSD) to the list of medical conditions that may be treated with medical marijuana. PTSD - which affects thousands of veterans of the armed forces and law enforcement agencies, survivors of domestic violence, rape, or other violent crimes, and victims of serious accidents - is a serious condition whose symptoms, such as intense anger, flashbacks, nightmares, night sweats, numbing, insomnia, and avoidance can be triggered by traumatic stressors. New York now joins other states with medical marijuana programs in allowing its certification for treatment of PTSD.

Governor Andrew Cuomo has signed into law a bill I sponsored in the Assembly (A. 7277, introduced in the Senate by Senator Kemp Hannon as S. 1869) that will allow a nurse practitioner to act on end-of-life decisions if he or she is the patient's attending nurse practitioner.

The new law will take effect in May 2018, making New York the 18th state to allow nurse practitioners to assist families in fulfilling end-of-life decision-making.

I was the author of New York's nurse practitioner legislation many years ago, and have passed several laws to strengthen the profession.

On December 4, I co-chaired a joint hearing in Manhattan of the Assembly Committees on Health and Environmental Conservation on Water Quality and Budget Implementation. At the hearing, we examined aspects of New York's State budget, which contains $2.5 billion in multi-year funding for water infrastructure projects, including land acquisition to protect source water, upgrades to municipal drinking water and wastewater treatment, water remediation and contaminated water mitigation, septic system replacement, and other initiatives.

We heard testimony from officials at the New York State Dept. of Environmental Conservation, the NYS Dept. of Health, the City of Newburgh municipal government, the Suffolk County Water Authority, and envi-ronmental activists from organizations like the Nature Conservancy of New York, the Natural Resources De-fense Council, Environmental Advocates, and Riverkeeper. At the hearing, a representative of the Environ-mental Advocates of New York praised the 2017 State budget as "remarkable" in its funding to address water quality issues in a comprehensive manner.

Improving the Quality of Health Care in Prisons and Jails

On October 30, I co-chaired a joint hearing in Albany of the Assembly Health and Corrections Committees on healthcare services in New York State's correctional facilities. Witnesses included the officials from the New York State and City Health and Corrections departments, representatives of local government and County jails, prison health oversight and advocacy organizations, and correctional facility staff.

Several issues were raised including staffing and quality control concerns, challenges with continuity of care for inmates leaving correctional facilities, and adequacy of care for women and transgender inmates. Corrections Chair David Weprin and I are carrying several bills to address various concerns that we hope to advance from the Health and Corrections Committees in the upcoming legislative session.