This spring the Assembly Committee on Health that I chair held hearings in Albany and New York City on legislation to enable terminally ill patients with decision-making capacity to request and receive medication to end their lives. The hearings focused on the Medical Aid in Dying Act, Assembly bill A.2383-A (introduced by Assembly Member Amy Paulin of Westchester).

With growing interest in the concept of "Aid in Dying", and similar legislation having been enacted in several states, the public hearings provided an important chance for arguments to be heard, questioned, and put into perspective. I support the bill; I believe it is part of every individual's right to control his or her body.

Several Subway Stations to be Closed for 6 Months

The MTA has begun its "Enhanced Station Initiative," a billion dollar program to upgrade 33 subway stations around the city. Recently the MTA announced that it will be temporarily closing and renovating several subway stations in our Assembly District as part of the Initiative.

The station at 72nd Street and Central Park West (C and B trains), which serves many residents of our district, closed on May 7 and is expected to reopen within six months.

Subway stations at Penn Station, serving the A/C/E and the 1/2/3 trains, are not completely closing, but will undergo work on specific staircases and control areas. The work at the 8th Ave. station is scheduled to begin on May 19 and to conclude at on November 16, 2018, and to begin at the 7th Ave. station on May 19 and end by December 20, 2018.

The work at these and other subway stations includes better lighting, the installation of platform countdown clocks, new "wayfinder" electronic displays, re-vamped station entrances, and aesthetic improvements. It will also repair aging concrete ceilings, corroded steel columns, and water damage. Unfortunately important improvements like elevators or escalators are not included. 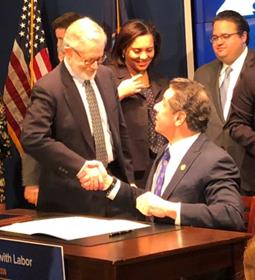 DEFENDING LABOR: I joined Governor Cuomo as he signed a new law helping public employee unions at the United Federation of Teachers' offices in Manhattan.

On April 12, I joined Governor Cuomo, labor leaders and union members, and colleagues in elected office at a bill-signing ceremony in Lower Manhattan for a new law to protect unions representing New York's public-sector workers. The law was recently passed as part of the State budget in anticipation of a possible adverse ruling in the pending Supreme Court case Janus v. AFSCME. The case, filed by the right-wing "Right to Work Foundation," seeks to deprive public employee unions of funding by preventing them from collecting fees from workers who benefit from collective bargaining but decline to join the union.

The new State law limits the free services that New York's public-sector unions must provide to workers who opt not to join the union. For instance, the unions will not have to provide legal representation and benefits to nonmembers. Workers and labor unions are under assault in Washington. But New York remains a strong union state, and labor union membership here increased by about 75,000 members in the last year. With unionized workers earning about $11,000 more annually than non-unionized workers, keeping the labor movement strong is critical to help families achieve the American dream.

Central Park Will Be Car-Free Starting in June

In a move I have long supported, Mayor de Blasio announced in April that vehicular traffic will be banned in Central Park beginning on June 27. Previously, private automobiles and trucks were banned from the Park above 72nd Street, but soon the drives between 72nd Street and Central Park South (in our Assembly District) will also be car-free at all hours!

The east-west transverse roads that cross the Park at 65th, 81st, 86th, and 96th Streets, which run below the Park and connect the Upper West and Upper East Sides, will not be affected.

"This park was not built for automobiles," Mr. de Blasio said during the announcement in Central Park. "It was built for people." I couldn't agree more, and I join organizations like the Central Park Conservancy and New York Road Runners in supporting this long overdue move.

Every year, NYC residents throw away more than 195,000 tons of clothes, accessories, bedding and other textiles. That's over 390 million pounds of valuable materials that could be put to use instead of sent to landfills. To address this waste, the NYC Department of Sanitation (DSNY) established the "refashionNYC" program in 2011, which established collection bins for donated clothing and textiles throughout the five boroughs. ReFashionNYC bins offer a free, easy way to donate clothing and textiles through an in-building donation service.

Now, in partnership with the HIV/AIDS and homeless service organization Housing Works, the reFashion NYC program is being offered to government offices, community boards and organizations that have the space to accommodate collection bins within their facilities.

If you or an organization with which you're involved would like to receive a reFashionNYC bin, or simply obtain more information, please fill out the online contact form on DSNY's website at: http://www1.nyc.gov/assets/dsny/site/services/donate-goods/refashion-nyc.

Tomorrow between 10 am and 4 pm, there will be a convenient opportunity to recycle electronic waste on W. 14th St. between 8th and 9th Aves. TVs, VCRs, DVD players, computer components, phones, batteries, and other electronic waste will be accepted for recycling, free of charge.

The event is hosted by the Meatpacking Business Improvement District in partnership with the Lower East Side Ecology Center with support from City Council Speaker Corey Johnson. To learn more, please call 212-477-4022.