Today, the New York State Assembly passed the "New York Health Act" universal health care bill (A. 4738-A/S. 4840-A) by a wide margin for the fourth year in a row. The legislation, introduced by Senator Gustavo Rivera and me, would establish "improved Medicare for all" health insurance coverage in New York State by providing universal, comprehensive health care to all New Yorkers without premiums, co-pays, deductibles, or limited provider networks. It has 31 co-sponsors in the State Senate, just one vote shy of an outright majority.

Taking insurance companies out of the picture would bring New Yorkers net savings of $45 billion a year, by eliminating insurance industry administrative costs and profit and the billions of dollars in administrative costs incurred by health care providers, employers, and patients to fight with insurance companies. New York Health would also be able to negotiate much lower prices with drug companies. Because health insurance costs incurred by businesses can fluctuate wildly - upward - a single-payer system would also guarantee greater cost predictability.

Universal, complete health coverage through a single-payer "improved Medicare for all" system would cover everyone while removing financial barriers to care with a progressive, broad-based public funding system based on ability to pay. As documented in a study by University of Massachusetts-Amherst economist Gerald Friedman, the net savings to New Yorkers every year would be $45 billion, achieved by lowering the costs of private health insurance administration and of health care providers spend fighting with dozens of different insurers - total administrative costs that today make up 20% to 25% of the American health care dollar. New York Health would also achieve savings by negotiating prices for drugs and medical devices, and save businesses the time and money they spend reviewing, selecting, and administering employee health benefits. New Yorkers would save billions they now spend on deductibles, co-pays, and out-of-network charges.

New Yorkers deserve better than the current health insurance "marketplace." We should be able to go to the doctor when we need to, without worrying whether we can afford it. We should choose our doctors and hospitals without worrying about network restrictions. We deserve health coverage for all of us, paid for based on our ability to pay, not what the market will bear.

People say a single-payer system makes perfect sense, but "it could never happen." The Assembly's action and the growing support among the public and in the State Senate are changing that conversation. 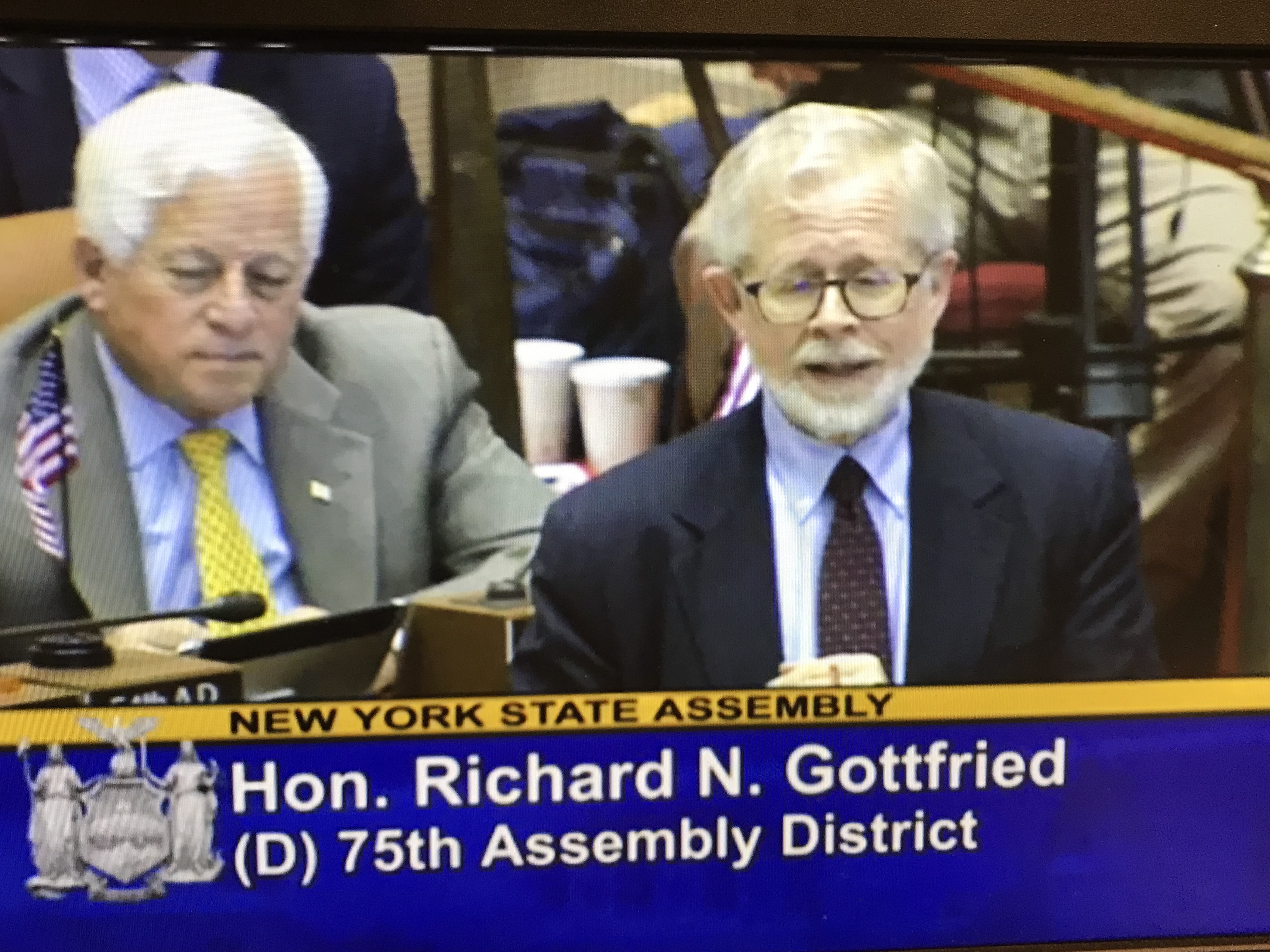 IMPROVED MEDICARE FOR ALL: Today I spoke on behalf of the New York Health Act, a bill I'm sponsoring in the Assembly to establish "improved Medicare for all" single-payer universal health care coverage in New York. It passed the Assembly by a wide margin for the fourth year in a row.

In May, the Assembly Judiciary and Health Committees held a joint hearing in Lower Manhattan on "compensated gestational carrier surrogacy" agreements in which an embryo created through in vitro fertilization results in the birth of a child not biologically related to the woman who carries and gives birth to the baby (a "surrogate"). This is now illegal in New York, although many states allow it.

Compensated gestational surrogacy has been banned in New York since 1992. ("Traditional" surrogacy -pregnancy by artificial insemination using the mother's own egg, resulting in a child genetically related to the mother -- is legal in New York.)

The hearing examined the shift away from traditional surrogacy toward the now more prevalent practice of gestational surrogacy. With many cultural, medical, scientific, and societal changes having occurred since New York's 1992 ban took effect - in particular, the advent of marriage equality for same-sex couples throughout the U.S. - New York law now lags behind many other states. Yifat Shaltiel, an attorney and Co-Chair of the Reproductive Health Committee of the New York Women's Bar Association, testified at the hearing that New York's law is the most "restrictive and punitive" in the country, since it bars all gestational carrier contracts made in New York, and effectively makes it illegal for a woman who agrees to carry a child for another person or couple to be compensated in any manner. 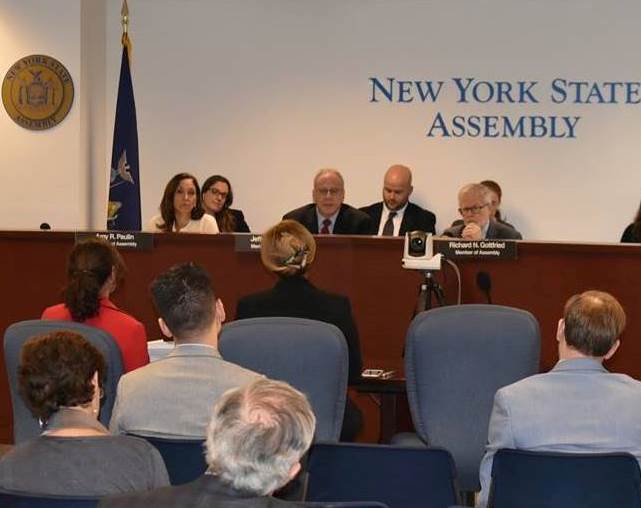 HEARING ON SURROGATES: In May, I co-chaired a hearing on surrogate parenting for compensation, which is now illegal in New York. To my right are Assembly Member Amy Paulin, Assembly sponsor of the Child-Parent Security Act to legalize it, and Assembly Judiciary Committee Chair Jeffrey Dinowitz.

The hearing focused on the Child-Parent Security Act (A. 6959), introduced by Assembly Member Amy Paulin of Westchester County and State Senator Brad Hoylman of Manhattan, which would overturn the ban on compensated surrogacy in New York. I cosponsor the bill.

It's Time to "Fast Forward" Better Subway and Bus Service

In May, Andy Byford, the new President of the New York City Transit Authority (NYCTA), announced "Fast Forward," a sweeping new program to improve subway and bus service. I support the plan and will work for its enactment - and its full funding.

The plan, which is estimated to cost about $19 billion, will focus on key priorities to improve mass transit, including:

The "City" transit system is actually run by the MTA, a State entity controlled by the Governor, not the Mayor. Considering how much the transit system is tied to life and work in New York, I believe the Mayor should have a significant voice in planning and carrying out the plan.

After many years of neglect and under-funding of New York City's mass transit net-work, our subway and bus network has reached a crisis point. The Fast Forward plan is a bold and ambitious initiative to bring New York City's subways and buses into the 21st century, and it deserves our strong support.

Fighting for Affordability for Rent-Regulated Tenants

The New York City Rent Guidelines Board (RGB), which establishes rent adjustments for the approximately one million rent-regulated dwelling units in New York City, is holding a series of public hearings leading up to its final vote on June 26 to determine the rent increases it will authorize for lease renewals taking effect between October 1, 2018 and September 30, 2019.

I have signed on to a letter to the RGB by Assembly Member Harvey Epstein and other Assembly members, urging the RGB to vote for a rent freeze, as they did in 2015 and 2016. We said that "landlords of typically sized rent-stabilized buildings… have earned an average net operating income of $312,176 in the last year of available data… nearly five times the average annual income of a small business in New York City," while rent-stabilized tenants are confronting a decrease in real wages and a rent increase will place low-income New Yorkers - who comprise a majority of those living in rent-regulated apartments - in even more precarious economic circumstances.

The next public hearing of the RGB in Manhattan, at which testimony by members of the public will be heard, will take place on Tuesday, June 19, from 4:00 p.m. to 8:00 p.m. in the basement of the Great Hall at Cooper Union at 7 East 3rd Street. On Tuesday, June 26 at 7:00 p.m. at Cooper Union, the RGB will hold its last public meeting of the year, where it will take its final vote on rent increases.

On Legislative Disabilities Awareness Day in Albany, May 30, the Assembly passed several bills to help improve the lives of New Yorkers with disabilities. Included in the package of legislation were:

Thanks to generous support from the FDNY Foundation, members will be distributing free smoke/carbon monoxide alarms, fire safety coloring books, fire helmets for children and educational material promoting fire and life safety tips. This event is open to any member of the public.

Here are locations and times for FDNY Open Houses on Saturday, June 16 in or near Assembly District 75:

Locations and hours for other locations can be found on the FDNY website at http://www1.nyc.gov/site/fdny/index.page.

Animal Care Centers of New York City (ACC) is bringing its Mobile Adoption Center back to Union Square at 860 Broadway at E. 17th Street on Saturday, June 16th, from 12:00 noon to 4:00 p.m. Wonderful cats, dogs, and rabbits are available for adoption!

ACC is New York City's only open-admissions animal welfare organization, and takes in more than 30,000 animals every year. Upcoming events are also listed at http://nycacc.org/Events.htm

Get Your Reduced-Fare Metrocard at an MTA Bus or Van

The full mobile MetroCard schedule is available at: http://mta.info/metrocard/mms.htm.

Please note that MetroCard buses and vans do not take credit cards. 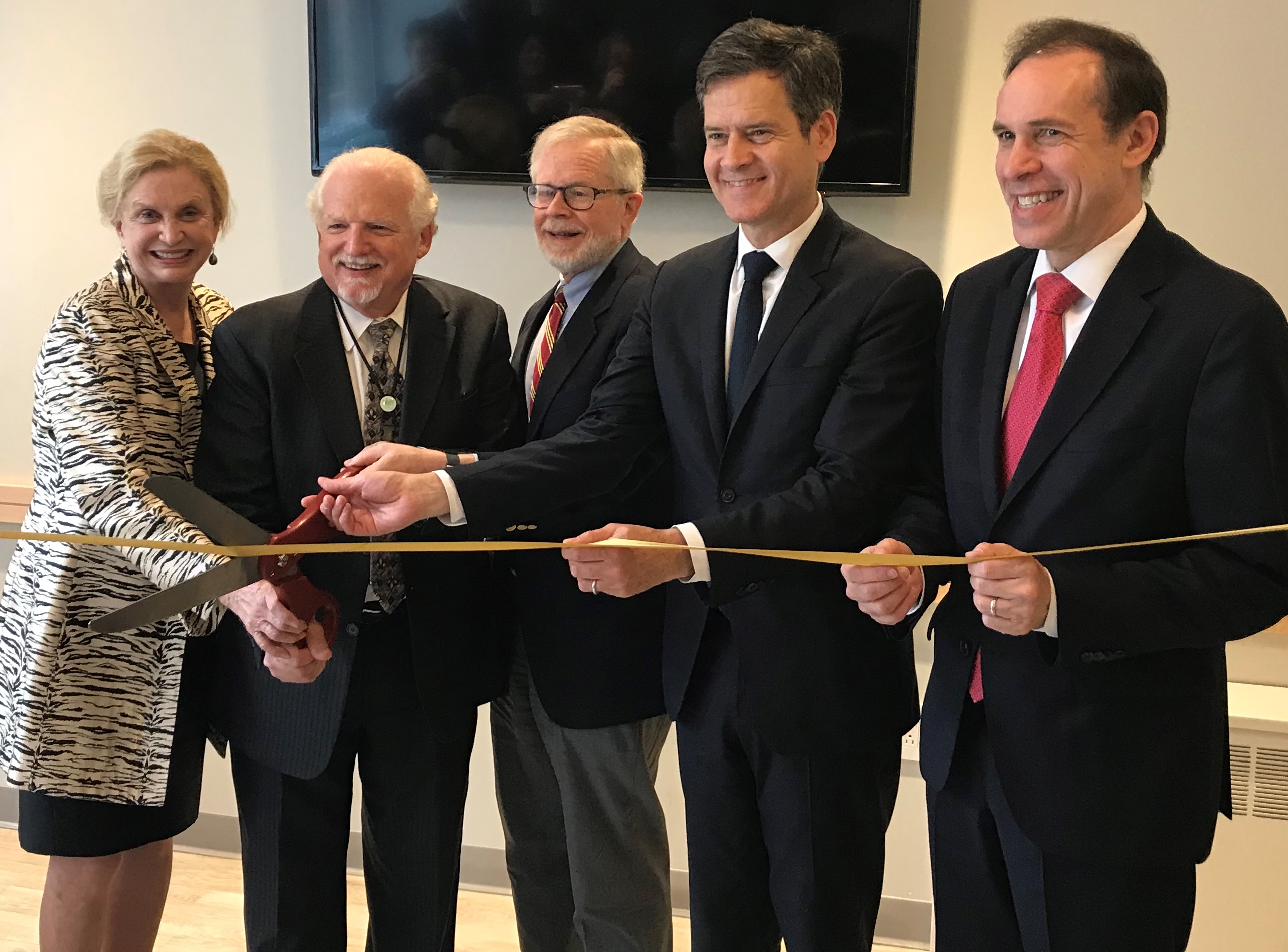 NEW CLINIC IN CHELSEA: On June 1, I helped cut the ribbon for the new Institute for Family Health clinic in Chelsea at 230 West 17th Street, the Institute's 32nd health clinic in the metropolitan area. (L-r: Congresswoman Carolyn Maloney; Dr. Neil Calman, Executive Director of the Institute; and on my left State Senator Brad Hoylman and NYS Health Commissioner Howard Zucker.)

The NYC Department of Education's Summer Meals Program offers free meals to all children ages 18 and under at hundreds of public schools, community pool centers, and other locations around the city. This year, the program begins on June 27, the day after the end of the school year. No registration, documentation, or proof of identification is required to receive a free breakfast or lunch.

The Summer Meals Program takes place on weekdays from Wednesday, June 27, to Friday, August 31 (except for July 4th and August 21st). Although the hours may vary in each location, breakfast is usually provided from 8:00 a.m. to 9:15 a.m., and lunch from 11:00 a.m. to 1:15 p.m. Each building hosting a Summer Meals Program site will feature posters outside indicating the hours specific to that site.

This list will be updated every Friday until the start of the Summer Meals Program, when the updates will be daily and the site search will be active.