On Monday evening, I joined residents and business owners in the Flatiron District for a community briefing with several NYC government agencies, elected officials, and Con Edison on the impact of last Thursday's steam pipe explosion. I spoke with residents, business owners, CERT volunteers, and workers affected by the explosion and its aftermath, and also arranged for the New York State Department of Financial Services to provide assistance for those filing insurance claims at a temporary reception center at the Clinton School at 10 East 15th Street.

The latest information from government agencies, Con Ed, and other organizations assisting in the recovery effort includes the following:

"Emergency crews are still on scene assessing the situation. As of July 23, the air samples analyzed have been negative for asbestos though some debris samples contained asbestos.

You should expect traffic delays, road closures, and the presence of emergency personnel in the area in the vicinity of West 21st Street and 5th Avenue in Manhattan.

You should stay away from the affected area. 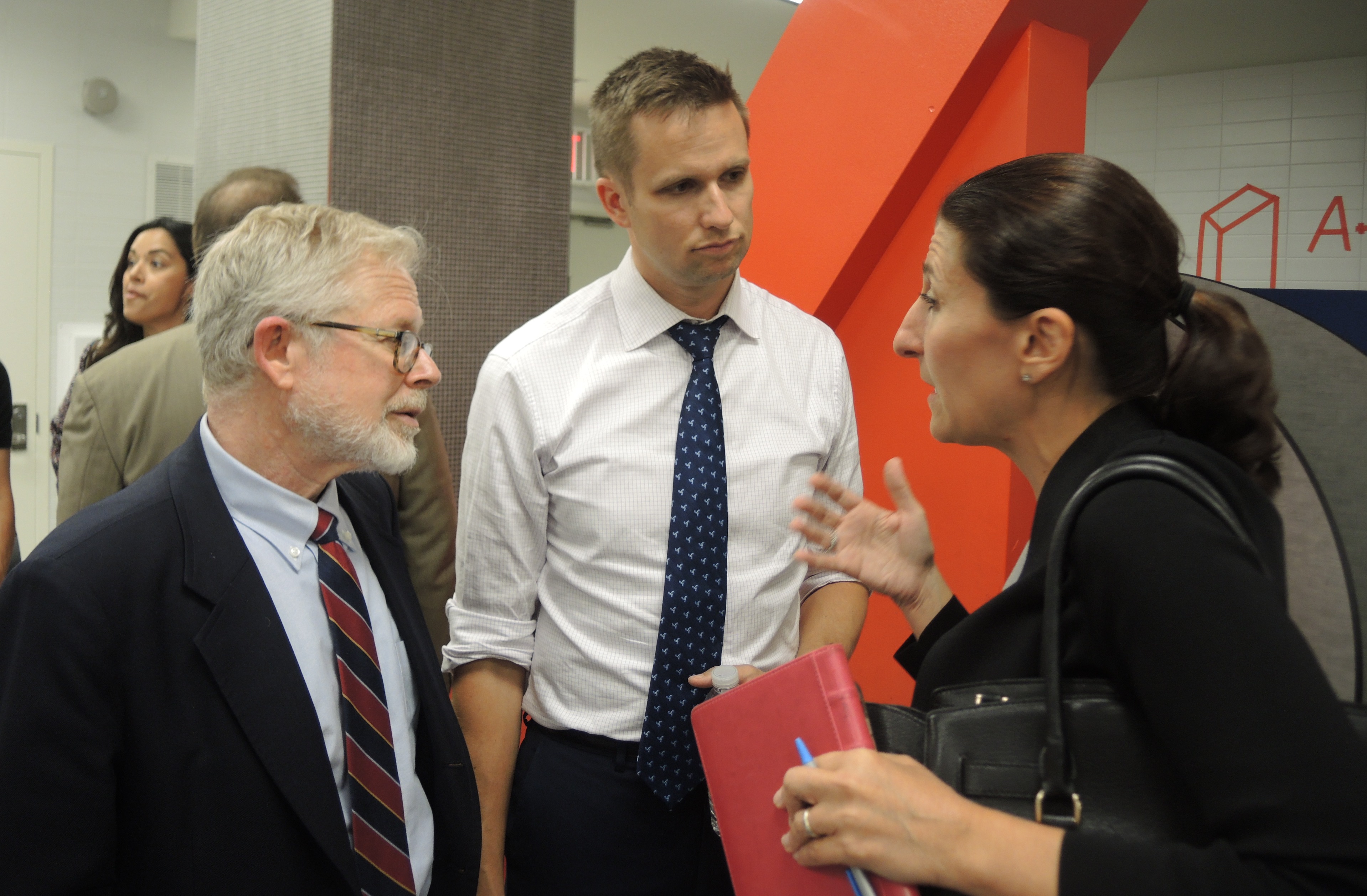 Affected tenants or building managers should set up inspections at reception center located at The Clinton School at 10 East 15th Street between the hours of 8 AM and 8 PM. Inspections are needed for clean up and to let people return to their buildings. Department of Health personnel will be available.

City agencies, Con Edison, and buildings owners are working together to complete the following:

Building owners will receive a letter from the Health Department and the Department of Environmental Protection when their building is ready for re-occupancy. For any other concerns you should visit the reception center during their hours of operation. The center offers information only.

If you have additional questions about air quality, asbestos, or building status, please contact the Department of Environmental Protection (DEP) at nycair@dep.nyc.gov or (718) 595-5610. The following buildings are open for re-occupancy:

The following buildings are still affected:

Claim forms from Con Edison can be obtained at: https://www.coned.com/en/services-and-outages/claim-form.

My bill - the "New York Health Act" (A. 4738-A /S. 4840-A) - passed the Assembly in June by a 2-to1 margin for the fourth year in a row. The bill, carried in the Senate by Gustavo Rivera, would establish "improved Medicare for all" health insurance coverage in New York. That means universal, complete health care for every New Yorker, without premiums, co-pays, deductibles, or limited provider networks. It has 31 co-sponsors in the State Senate, just one vote shy of an outright majority.

The reduced cost of coverage would be paid for by a broad-based tax - progressively graduated, based on ability to pay - on payroll income (paid at least 80% by the employer) and taxable income like capital gain, dividends, and interest. Better coverage; lower cost; paid for more fairly.

No New Yorker should have to go without health care, and no one should have to suffer financially to get it. Critics of the New York Health Act - mostly allies of the insurance companies - don't want to openly disagree with that simple principle. But they never offer an alternative that achieves those basic goals.

People say a single-payer system makes perfect sense, but "it could never happen." The Assembly's action and the growing support among the public and in the State Senate are changing that conversation. If you have questions about the New York Health Act or want more information, write to me at GottfriedR@nyassembly.gov.

Adult Use of Marijuana - In January, the Assembly Committees on Codes, Health, and Alcoholism and Drug Abuse held a hearing on allowing, regulating, and taxing adult use of marijuana. I cosponsor a bill to do that; it is carried by Senator Liz Krueger.

The term "recreational use" hides the reality that it's about a punitive criminal justice approach that destroys tens of thousands of lives a year.

Medical Aid in Dying - The Health Committee held two hearings on the Medical Aid in Dying Act, legislation I co-sponsor. It would enable terminally ill patients with decision-making capacity to request and receive medication to end their lives. Similar legislation has been enacted in several states. Over 70 witnesses for and against the bill provided over 17 hours of combined testimony in Albany and New York City, speaking as medical and legal experts, ethicists, religious leaders, advocates, patients and family members telling their personal stories.

I believe this is about patient choice and human dignity. For over a hundred years, New York law has already recognized that adults with mental capacity have the right to refuse life-sustaining treatment. Morally and legally, they should have the right to end their suffering through medication if that is their choice.

Preventing Opioid Overdose Deaths - With the Alcoholism and Drug Abuse Committee (chaired by Assembly Member Linda Rosenthal), we held a hearing on access to opioid overdose drugs such as naloxone, which can reverse opioid overdoses. New York laws expanded access to these drugs and allowing non-medical personnel to administer them.

But gaps remain. Locations such as college campuses and homeless shelters do not have universal access. A recent New York Times article showed that many pharmacies do not offer it.

Surrogate Parenting - Surrogate parenting is an increasingly important issue, especially for same-sex couples. The Health and Judiciary Committees held a hearing on the issue. Witnesses including legal experts, fertility clinic representatives, and LGBT advocates spoke to the ethical and legal aspects of the issue.

In 1992, New York State outlawed paid surrogate parenting. There have been significant medical, scientific, cultural, and social changes since then, including enactment of marriage equality. I believe it's time to reconsider New York's outdated restrictions.

CVS/Aetna Merger -CVS Health plans to acquire Aetna, Inc., which would create a huge unprecedented health conglomerate. The Assembly Health and Insurance Committees held a hearing on the potential impact on New Yorkers and what New York State regulators should do.

I am deeply troubled by the merger's creation of what economists call "vertical integration" in health care. Having a major insurance plan, pharmacy chain, and pharmacy benefit manager in one company - at the same time it is expanding into broader health care delivery - will increase insurance company control over patient care and unfairly threaten competing health care providers, including the traditional family doctor. Witnesses including Consumers Union also raised significant concerns about patient privacy. The State Health Department and Department of Financial Services must act to protect us and our health care.

New York has the strongest gun control laws in the country - especially the 2013 "SAFE Act" that I co-sponsored. But there is a lot more to be done.

I'm a member of the New York Legislators for Gun Violence Prevention. We're working for a broad collection of bills to strengthen New York's gun laws. Strong bills pass the Assembly, and in the aftermath of the Parkland murders, they have significantly more support. But while our own State Senators strongly support them, they still don't get action in the Senate.

Among the measures we've passed are bills to make background checks more effective by expanding the time to conduct a check from three days to ten days (because many background checks cannot be completed in three days); ban "bump stocks," which allow semi-automatic rifles to function like fully-automatic rifles; require safe storage of guns at home; require all guns to micro-stamp an identifying number on shell casings; and others. A new law that was passed as part of the State budget prevents persons convicted of domestic abuse from possessing rifles, shotguns, and handguns, and prohibits individuals who are wanted for a felony or other serious offense from obtaining or renewing a firearm license.

We passed legislation to establish "extreme risk protection orders" - court orders to keep guns out of the hands of those who pose a serious threat to themselves or others. States with stricter gun laws, like New York, have less gun-related violence than those that don't. 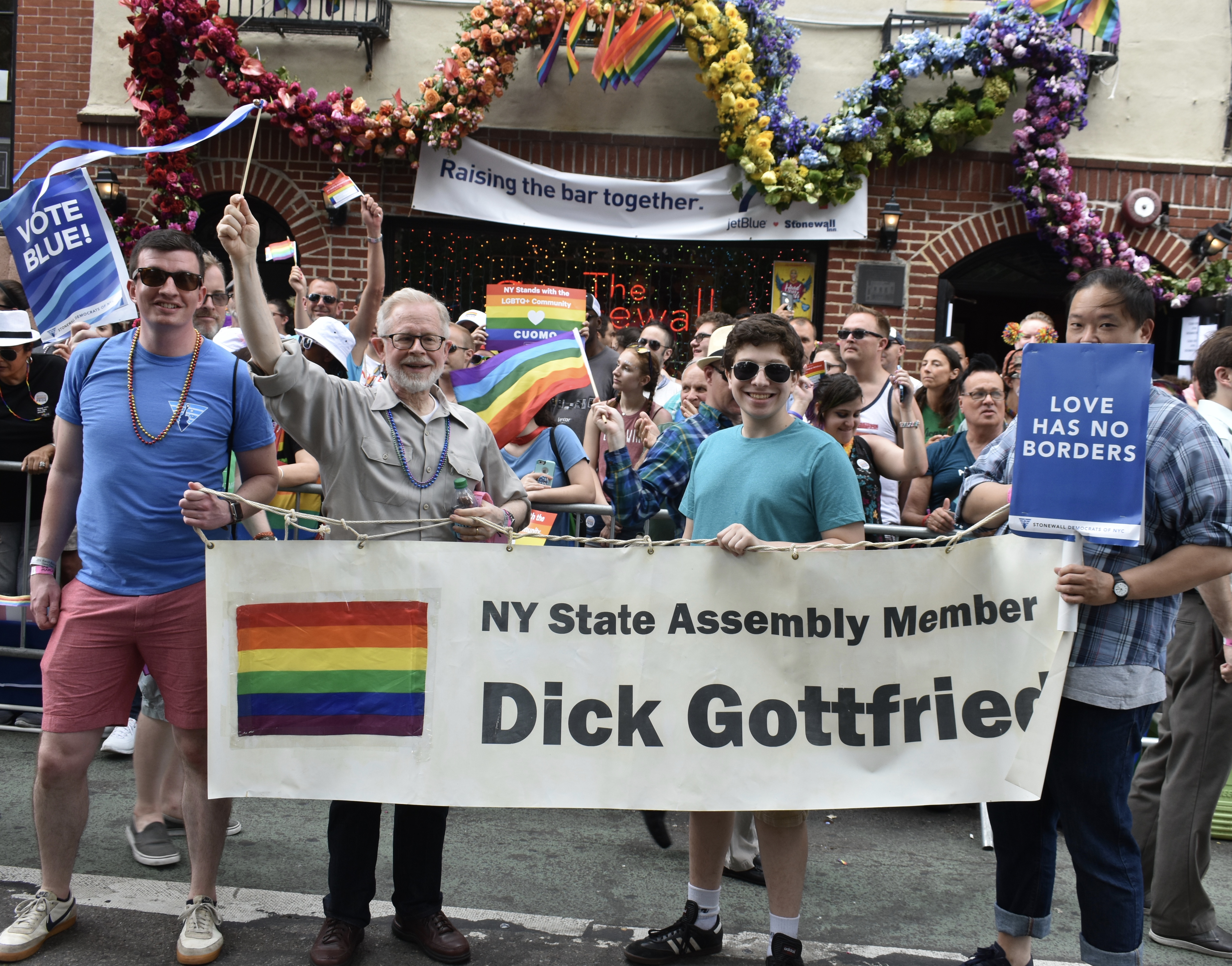 STONEWALL PRIDE: Every year I walk in the Heritage of Pride March to celebrate New York's vibrant LGBTQ community, and offer a special salute to the brave men and women who launched the modern movement for LGBTQ equality in 1969 at the Stonewall Inn in Greenwich Village.

Before the Rent Guidelines Board (RGB) acted in June, I submitted joint testimony with Assembly Member Harvey Epstein and other legislators urging the RGB to freeze rents, as it did in 2015 and 2016. Instead, the RGB approved Rent Stabilization increases of 1.5% on one-year leases and 2.5% on two-year leases for rent-stabilized apartments. It's the steepest hike for one-year leases since 2013.

In the last quarter century, the RGB has approved increases for rent-regulated units that are significantly greater than increases in both rent-regulated tenants' incomes and building owners' operating expenses. This new round of rent hikes will inflict further financial hardship on many tenants, particularly seniors and persons with disabilities living on fixed incomes, and contribute to a rise in evictions and homelessness.

In May, Andy Byford, the new President of the New York City Transit Authority (NYCTA), announced "Fast Forward," a sweeping new program to improve subway and bus service. I support the plan - and its full funding. It is estimated to cost about $19 billion. Key elements include:

The "City" transit system is actually run by the MTA, a State entity controlled by the Governor, not the Mayor. Considering how much the transit system is tied to life and work in New York, I believe the Mayor should have a significant voice in planning and carrying out the plan.

After many years of under-funding, our subways and buses are in crisis. The Fast Forward plan deserves our strong support.

The Metropolitan Transportation Authority (MTA) has launched "MYmta," a comprehensive new app, along with a new mobile-optimized website, which you can find at new.mta.info. Both the app and the website bring "wayfinding" for all of the MTA's mass transit properties under one roof.

Within the MYmta app, the MTA is also building in special functionality for Paratransit customers, in a part of the app that will be known as "MY Access-A-Ride" [or MYAAR]. It will enable paratransit users to plan and manage their trips, book rides, track the real-time location of their driver, and give the MTA feedback on what's working and what isn't, all from a mobile phone, tablet, laptop or desktop computer. MYAAR is slated to launch later this summer.