RAND Study Confirms: NY Health Act "Improved Medicare for All" Would Expand Coverage and Save Billions

In August, the highly-regarded, independent, non-profit RAND Corporation issued a study of the New York Health Act, the bill sponsored by Senator Gustavo Rivera and me that would pro-vide universal health care coverage in New York through a single-payer, publicly funded "improved Medicare for all" health coverage - complete health care for every New Yorker without premiums, co-pays, deductibles, or restricted provider networks.

The RAND study confirms that New York Health would reduce total costs, while increasing spending on actual care rather than administration and insurance company profit; provide full health coverage to every New Yorker; save substantial money for almost all New Yorkers; and generate a net increase in employment due to increases in disposable income.

In 2017, the New York State Health Foundation commissioned RAND to assess the savings, costs, and feasibility of the New York Health Act. Using conservative estimates, the RAND study establishes that New Yorkers would receive more health care services under the new single-payer plan than under the current system. But by cutting out insurance company administrative costs and profit, reducing health care provider administrative costs, and negotiating lower drug prices, total spending would be slightly lower in 2022, with the savings growing to $15 billion annually by 2031.

The RAND study shows that the majority of New Yorkers would pay less under the New York Health Plan. Premiums, deductibles, co-pays, and out-of-network charges would be eliminated, and 90% of households would save an average of $2,800 per person annually - thanks to the lower costs and an equitable sys-tem of taxes based on ability to pay.

The RAND study offers an important validation of the New York Health Act by one of the most prestigious analytical firms in the country. It shows we can make sure every New Yorker gets the care they need and won't suffer financially to get it; save billions of dollars a year by cutting administrative costs, insurance company profit, and outrageous drug prices; and pay for it all more fairly. There is no plan being proposed that comes close to doing that.

The study also shows it's feasible to include long term care - home health care and nursing homes - in the bill.

People used to say that a single-payer system makes perfect sense, but "it could never happen." The Assembly's action, the growing support among the public and in the State Senate, and the powerful validation of the New York Health Act by the RAND study, are changing that conversation.

In the face of continuing inaction by the State Senate leadership on re-authorizing speed cameras in school zones to help protect public safety, Governor Cuomo issued an Executive Order declaring a state of emergency in New York City and thereby reinstating the speed camera program. The Governor's Executive Order temporarily suspended the provisions in the speed camera legislation that forced it to lapse earlier this summer. It also provides New York City the authority to implement the program ahead of the school year.

Mayor de Blasio and City Council Speaker Corey Johnson played leading roles in ensuring that the City would be able to resume the operation of the speed camera program right away. I joined parents, advocates from Transportation Alternatives and other organizations, and other elected officials to celebrate the move at a rally and press conference at City Hall yesterday.

The State Senate still must act to enable the speed camera program to resume on a long-term basis. Beyond that, the state should authorize local governments to install speed and red light cameras as they choose. 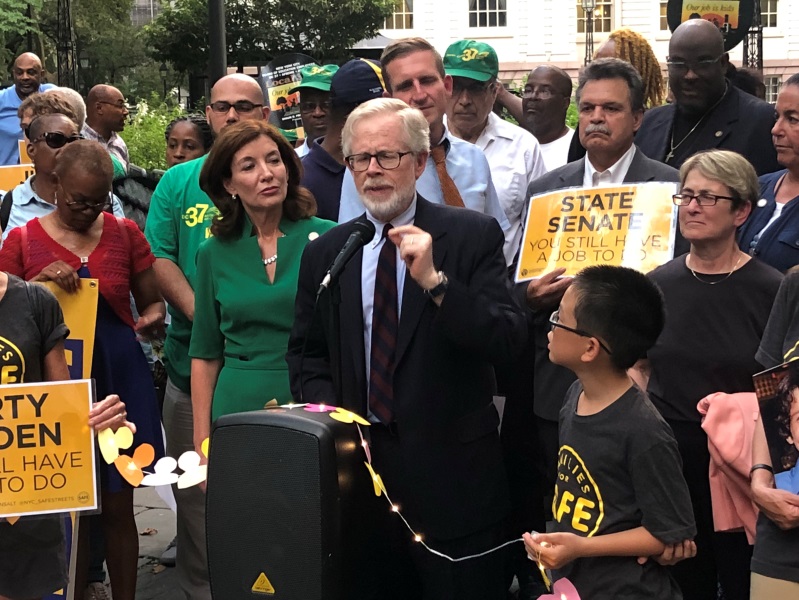 PUTTING THE BRAKES ON SPEEDING CARS: In September, I spoke at a City Hall rally to celebrate the temporary resumption of New York City's speed cameras in school zones. Joining me at the rally were Lt. Governor Kathy Hochul, and Assembly Members Deborah Glick and Felix Ortiz.

In August, I celebrated the opening of two new playgrounds, at Chelsea Waterside Park and at the Mathews-Palmer Playground in Hell's Kitchen.

On August 2, we cut the ribbon for the refurbished Mathews-Palmer Playground located on West 45th Street between Ninth and 10th Avenues. (The Playground is named in honor of two outstanding New York women: May Mathews, a dedicated social worker at the nearby Hartley House, and Alexandra Palmer, a longtime Hell's Kitchen resident and advocate for the park.) After receiving considerable input from the community, the long-awaited refurbishment of the park makes it once again a great resource for children and families. I said in my remarks at the opening ceremony, "When the City listens to and works with Hell's Kitchen, good things happen!"

On August 14, I joined Congressman Jerry Nadler, Senator Brad Hoylman, City Council Speaker Corey Johnson, leaders from Hudson River Park Trust and Community Board 4, and Chelsea residents to celebrate the completion of the new 17,000-square-foot playground at Chelsea Waterside Park on West 23rd Street. I'm glad I could secure $800,000 in the latest round of State funding to support the project. 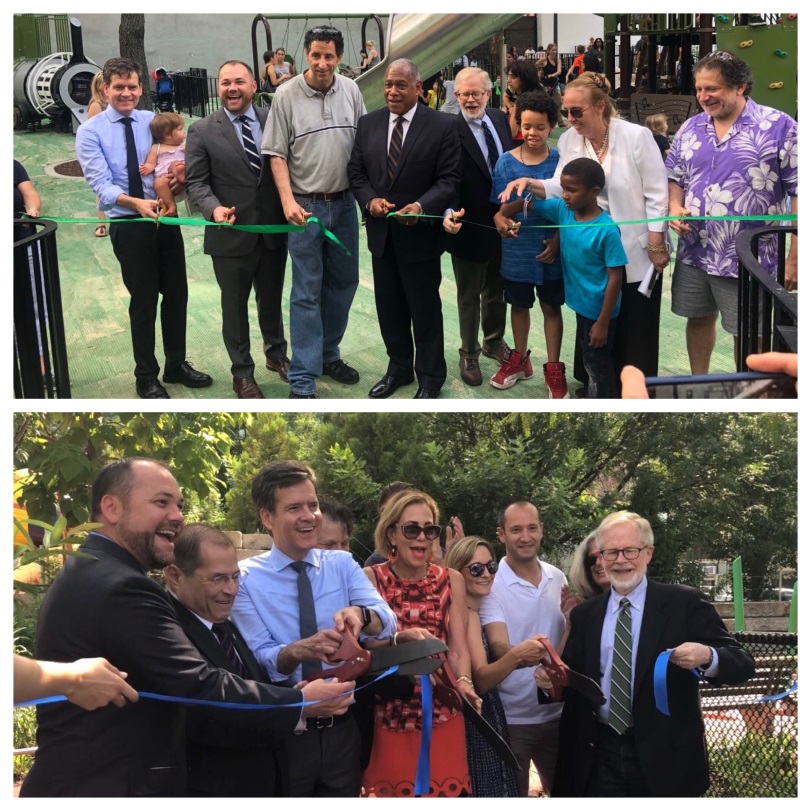 NEW PLAYGROUNDS ON THE WEST SIDE: Celebrating new playgrounds that opened in August in Hell's Kitchen (top) and Chelsea.

Honoring the Legacy of Bayard Rustin in Chelsea

Rustin dedicated his life to fighting injustice, and was a key organizer of the 1963 March on Washington for civil rights led by Martin Luther King, Jr. He spoke out on numerous progressive causes such as fighting Jim Crow segregation in the South, apartheid in South Africa, the oppression of Jews in the former Soviet Union, and defending Haitian refugees. 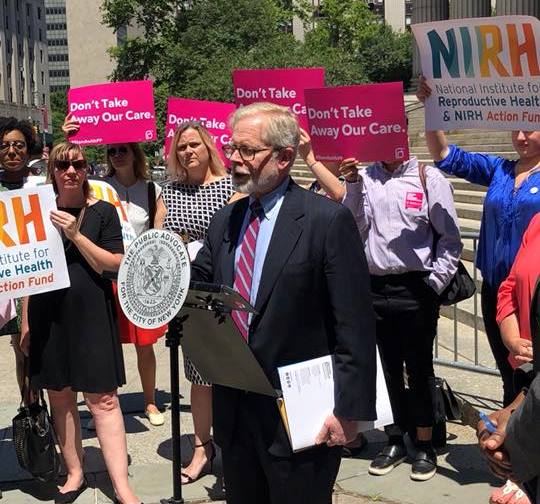 Last spring, the Trump administration proposed a rules change to Title X, the only federal program dedicated to providing women with comprehensive family planning and related preventive health services. Trump's "gag rule" would explicitly bar health care providers who get federal funding through Title X from referring patients to abortion providers. Only a pregnant woman who has already affirmatively voiced her decision to get an abortion - as distinguished from a patient seeking information as she weighs a decision about a pregnancy - could be informed about medical providers performing abortions.

Trump's proposed rule is an attempt to deny women their basic rights.

This would severely limit access to a wide range of vital health care services for millions of Americans, including over 300,000 New Yorkers and 4,000 Title X- funded health care providers around the country, including community health centers, hospital-based clinics, and health departments.

Before Trump's gag rule could be enacted, the U.S. Department of Health and Human Services (HHS) was required by law to receive public comments on it.

This summer I submitted comment to HHS urging it to reject the gag rule, and joined NYC Public Advocate Tish James and other activists in speaking out against the gag rule at a rally and press conference in Lower Manhattan.