For years, good legislation has passed the Assembly and died in the Senate. In January, that will change!

Strengthening the rent laws and tenant rights is one of the most important items on our agenda with the new Senate. The rent laws are up for renewal in 2019. Instead of being forced by out-of-City Republicans to accept weakening amendments as in the past, we have a real chance to eliminate vacancy decontrol, restore home rule on the rent laws to New York City, and enact a long list of important changes for tenants.

The New York Health Act is my bill to create universal "single payer" "improved Medicare for all" health coverage in NY. It has passed the Assembly by 2-to-1 margins four years in a row. Now, a majority of the new Senate is on record supporting the bill.

We hope to enact the DREAM ACT, campaign finance reform, voting reform (including same-day registration and early voting - things that are common in many other states), criminal justice and other good government and ethics reforms.

I will be working to strengthen our laws against sexual harassment, including working with the Sexual Harassment Working Group, made up of former women legislative employees.

The list goes on! We will have a busy and productive legislative session!

On October 30, I joined other elected officials and leading businesses in the Hudson Yards and Chelsea neighborhoods at the Church of the Holy Apostles in Chelsea to announce the formation of the West Side Community Fund (WSCF). The Fund will support innovative programs and initiatives serving communities in Manhattan between Seventh and Twelfth Avenues and W. 14th and W. 38th Streets, an area experiencing significant new development.

Launched by Google and Related/Oxford Hudson Yards and drawing financial support from 19 companies that are located in or will move to the area, the WSCF will provide micro and small grants ranging from a few hundred dollars to more than $5,000 to spur innovation and new initiatives benefiting local residents. The Citizens Committee for New York City is providing administrative support.

The Fund is now accepting grant applications, with priority given to programs serving underserved New Yorkers, including youth, seniors, persons with disabilities, and the homeless. Tenant and block associations, schools, houses of worship, and a broad range of service and civic agencies are encouraged to apply. WSCF grant applications are due by December 3rd, with the initial round of Chelsea & Hudson Yards Grants expected to be announced in February 2019.

To learn more about the WSCF or about how to apply for a grant, please see the website of the Citizens Committee for New York City. 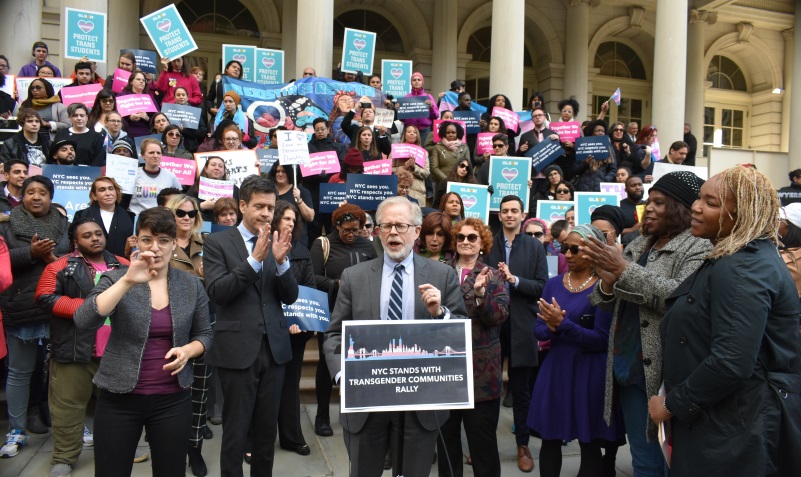 STANDING WITH THE TRANSGENDER COMMUNITY: I spoke out against the Trump administration's effort to redefine transgender people out of existence at a City Hall rally in October.

The Trump administration's Department of Health & Human Services is considering redefining gender in a move to roll back recognition and protections of transgender people under federal civil rights law.

I denounced the Trump administration's bigoted and mean-spirited attack on the transgender community and talked about the need to pass the Gender Expression Non-Discrimination Act (GENDA) in New York State, which is my bill to outlaw discrimination against transgender people at a protest rally at City Hall with other activists and supporters of transgender rights. Also at the rally were: the Sylvia Rivera Law Project, the LGBT Community Center, Planned Parenthood and other organizations, along with Comptroller Scott Stringer, State Senators Brad Hoylman and Brian Kavanagh, Council Member Brad Lander, Assembly Member Jo Anne Simon, and others.

Rallying Against Overdevelopment on the Upper West Side

On October 12, I joined dozens of Upper West Siders, Manhattan Borough President Gale Brewer, Assembly Member Linda Rosenthal, Councilmember Helen Rosenthal, and members of the Committee for Sound Environmental Development (CFESD), the Municipal Arts Society, and other organizations to protest the gigantic skyscraper planned at 200 Amsterdam Avenue -- and the wave of super-tall buildings that threaten to overwhelm Manhattan neighborhoods.

Earlier that week, CFESD filed a lawsuit in New York State Supreme Court to challenge a ruling by the New York City Board of Standards and Appeals (BSA) on the legality of the zoning lot that will allow a residential building at 200 Amsterdam Avenue and 69th Street to rise 668' high.

Community activists expect a decision on the CFESD lawsuit before the end of the year. 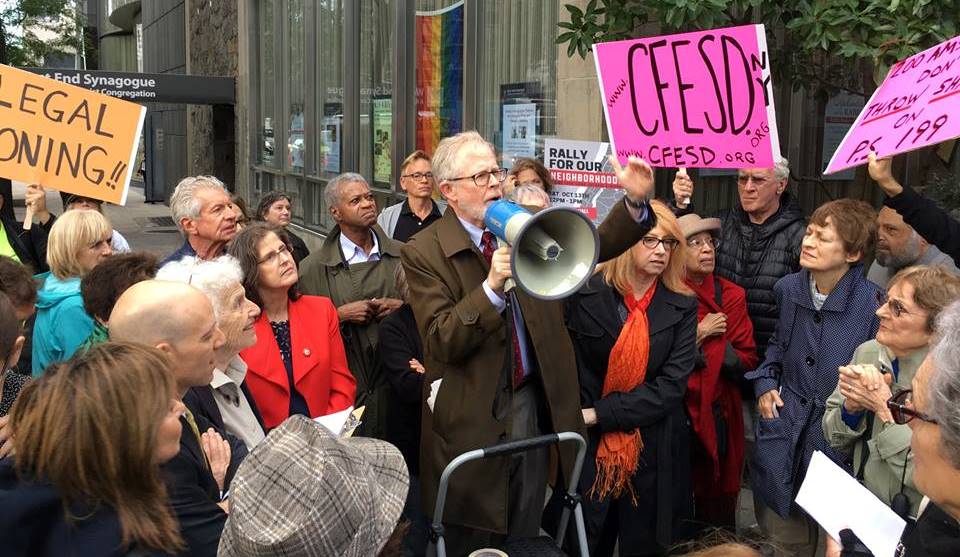 The Open Enrollment Period for Affordable Care Act (ACA) plans has begun, and will run through January 31, 2019. New York State of Health is New York's "marketplace" for signing up for ACA health insurance plans and publicly-sponsored health coverage (Medicaid, Child Health Plus, the Essential Plan).

If you already have a health insurance plan through the Marketplace, you can renew it or select a new plan starting on November 16th. Enrollment in the Essential Plan, Medicaid, and Child Health Plus is open all year long.

To ensure that coverage is effective as of January 1, 2019, consumers must enroll or renew by December 15th.

You can enroll in, or renew, a health plan by:

People who are eligible for a "Qualified Health Plan" with federal tax credits will see no or little increase in monthly costs in 2019. Bronze level plans will be free to individuals with incomes up to $25,000 and not eligible for Medicaid or the Essential Plan in every county of the state. Bronze level Qualified Health Plans have a higher annual deductible than other "metal level" plans (e.g., silver, gold). All these plans provide free preventive care and protect against catastrophic costs.

If the information you enter shows you are eligible for Medicaid, Child Health Plus or the Essential Plan, you will automatically be connected to sign up for that coverage.

NY State of Health representatives will be available at events across New York to educate consumers about the Marketplace and help enroll them in health plans. A list of locations is available on a handy map of NY State of Health events that you can find here: https://info.nystateofhealth.ny.gov/events.

While it's good news that more than 95% of Marketplace enrollees will see no cost increases in 2019, I am fighting hard to pass my bill, the New York Health Act, to achieve truly universal publicly-funded health coverage.

The New York Health Act has passed the Assembly by a 2-to1 margin for the fourth year in a row. We now hope to get it passed in the State Senate where it is sponsored by Sen. Gustavo Rivera. It would establish universal, complete health care for every New Yorker without premiums, co-pays, deductibles, or limited provider networks, while saving money for 90% of New Yorkers. It would achieve savings of tens of billion a year by eliminating insurance company administrative costs and profit and cutting the billions in the administrative costs doctors and hospitals spend to deal with and fight with insurance companies. New York Health would also be able to negotiate much lower prices with drug companies.

Support for the New York Health Act is broad, deep, and growing. Before this year's elections, it had 31 co-sponsors in the State Senate, just one vote shy of a majority. There is now a solid Democratic majority in the State Senate.

No New Yorker should have to go without health care or suffer financially to get it. I haven't heard anyone disagree with that - and I haven't seen any plan to achieve that other than the New York Health Act.