NEWS
From Bill Magnarelli
District: 333 East Washington St., Syracuse, NY 13202 (315) 428-9651 Albany: LOB 837, Albany, 12248 (518)455-4826
120th Assembly District
Magnarw@assembly.state.ny.us
I am pleased to announce that I have been appointed to the Regional Central New York Economic Development Council. Governor Cuomo created Regional Economic Development Councils to help transform our state's economy and return New York to greatness. I will be focusing my attention on helping to identify projects which will assist in furthering our area's strategic plan and improving the economic condition for our Syracuse region, by helping to create jobs and stimulating economic growth. In 2011, our area was awarded $103.7 million for 74 projects. In the coming months, I will work with the Council to build on the momentum established following last year's successful proposal. I look forward to sharing with you the results of our work. 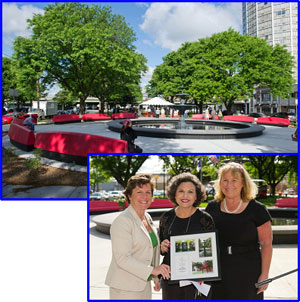 • Forman Park, on East Genesee Street in Syracuse, was rededicated as part of the Connective Corridor Project. Assemblyman Magnarelli secured $1.57 million in state funds to help in the year-long renovation of the park.

The renovations were to ensure that the park preserved certain historical elements, including some of the oldest trees in the city, the police memorial and the Redfield-Forman monument. New elements to the park include benches, bike racks, a fountain, public art and walking paths. The park also includes "Save the Rain" green infrastructure elements, like more than 4,000 shrubs and perennials which will capture about 119,000 gallons of storm water each year.

Assemblyman Magnarelli could not attend the grand opening of Foreman Park, as Assembly was in session in Albany. 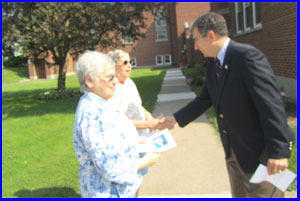 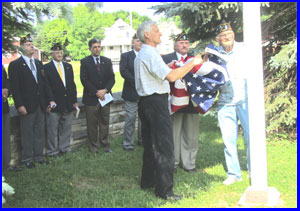 • Assemblyman Magnarelli presented an American Flag to Transfiguration Church on Teall Ave. During the Flag Raising Ceremony, Assemblyman Magnarelli recognized John Sobotka, a life long member of the parish and a veteran of World War II and Korea. Representatives from General Pulaski Post 1650 American Legion and the American Legion Eastwood Post #1276 took part in the celebration.


John Sobotka tells Assemblyman Magnarelli about convincing the military to let him serve,
despite being too young. 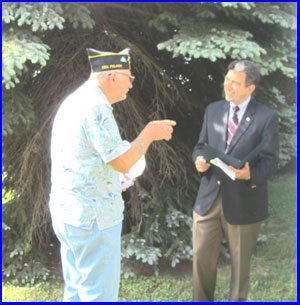 Below are several bills Assemblyman Magnarelli sponsored this legislative session that have been signed into law by Governor Cuomo.

A.3964-A Sale of Embalming Fluid (A.3964-A) Restrictions for the sale and distribution of embalming fluid. As a response to local law enforcement officials and chemical dependency treatment professionals who saw an increase in the street demand for this substance laced with other drugs, Assemblyman Bill Magnarelli sponsored legislation prohibiting its sale, except for normal funeral purposes. The legislation penalizes any funeral director, undertaker, or embalmer who sells or offers for sale embalming fluid to another person with actual knowledge that such person is not a licensed funeral director, undertaker or embalmer or registered student and that such person would be using the embalming fluid for purposes outside the scope of funeral directing or embalming activities. If they are caught giving out or selling embalming fluids illegally, they could face stiff fines and possible loss of license.

(A.9737) The Public Service Law requires that the New York Telecommunications Relay Service Center be located in Syracuse, New York. This provision would have expired on June 1, 2013. This legislation extends this provision until 2018. The center in Syracuse currently employs about 200 people. If this legislation was not enacted, there was a substantial risk that these jobs would be outsourced when the current law expires.

(A.9336) This legislation amends the NYS County Law by authorizing Onondaga County to re-organize and expand the operative area of its Federal Foreign Trade Zone (FTZ) at Hancock International Airport to include the neighboring counties of Madison, Oswego and Cayuga. The goal is to make it easier for companies in Central New York to engage in foreign trade and exports. Exports are a growing sector of the local economy, and this re-organization of the FTZ will aid in this growth. Duty-free treatment is accorded items that are processed in FTZs and then re-exported, and duty payment is deferred on items until they are brought out of the FTZ for sale in the US market. This helps to offset customs advantages available to overseas producers who compete with domestic industry. 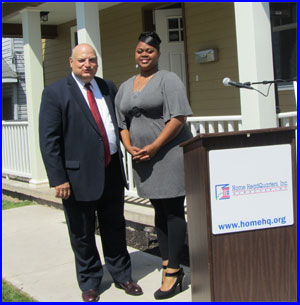 Left: A picture of before and after at 513 Hickory Street.
Above: Brandiss Pearson and Kerry Quaglia, Home HeadQuarters Executive Director, pose in front of the new home. 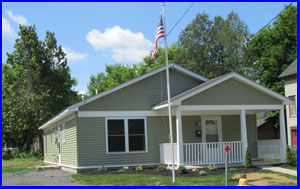 One of the two houses built as part of Syracuse Habitat for Humanity's Veterans Build. 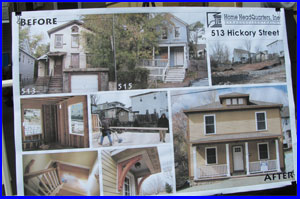 • Local organizations are helping fulfill the dream of homeownership and improving the appearance of our communities. Members of Assemblyman Magnarelli's staff attended these events.

Syracuse Habitat for Humanity was the first in the state to hold a Veteran's Build. The agency and volunteers built two specially adapted affordable homes on the Westside for local veterans. The dedication of the homes on Fitch Street was held May 17. 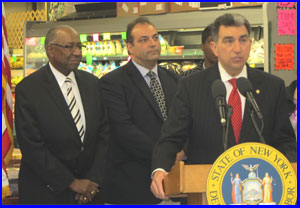 Councilor Van Robinson and Paul Nojaim, owner of Nojaim Brothers Supermarket on Gifford Street, joined Assemblyman Magnarelli in raising awareness about New York Youth Works, a program that encourages businesses to hire unemployed and disadvantaged youth. The program is aimed at reducing unemployment among teens and young adults in low-income parts of the state. Businesses interested in the program can go to www.youthworks.ny.gov. 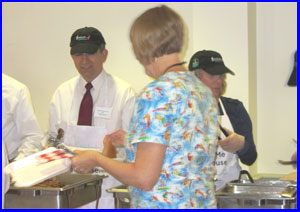 
About New York State Assemblyman William B. Magnarelli
Assemblyman William Magnarelli represents the 120th Assembly District, which includes the Northside, Westside, Eastwood and Valley areas of the City of Syracuse, as well as the towns of Geddes and Van Buren. He first won election in 1998 for an open Assembly seat and was reelected in 2000, 2002, 2004, 2006, 2008 and 2010. During his previous six terms in office, Assemblyman Magnarelli has focused his efforts on bringing more jobs to Central New York, lowering taxes, providing our children a better education at every level, improving our healthcare and keeping our families safe. For more information, contact Assemblyman Magnarelli's District Office at (315) 428-9651 or visit http://www.assembly.state.ny.us/magnarelli.